Researchers have identified a region of the malaria-parasite genome that underlies resistance to the most effective current treatment. The finding comes as drug resistance seems to be spreading in Southeast Asia.

Artemisinin has become the go-to treatment nearly everywhere that malaria is endemic. Resistance to it was first identified in 2005 in western Cambodia. Resistance does not necessarily cause artemisinin treatment to fail completely, but it does slow the clearance of the malaria-causing parasite Plasmodium falciparum from patients' blood. 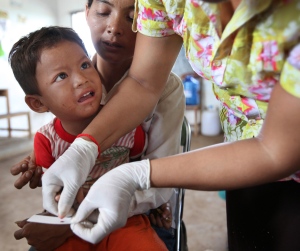 Screening for malaria in Cambodia. Resistance to artemisinin was first detected in the country in 2005.

Researchers are concerned that artemisinin-resistant strains of P. falciparum will spread to sub-Saharan Africa, as has occurred with other malaria treatments such as chloroquine and antifolate drugs.

To find the causes of artemisinin resistance, Ian Cheeseman, a geneticist at the Texas Biomedical Research Institute in San Antonio, and his colleagues compared Cambodian, Thai and Laotian P. falciparum populations that had differing clearance rates after artemisinin treatment. Their results are published in Science today1.

By mapping single-letter DNA differences among 91 parasites, the team found evidence of recent strong selection — as would be caused by the evolutionary pressure to evolve drug resistance — in 33 regions of the P. falciparum genome.

The researchers next looked for associations between each of these genomic regions and clearance rates, using an archive of blood samples taken from Thai malaria patients between 2001 and 2010. Less than 5% of the parasites from 2001 showed slow clearance rates; by 2010, more than 50% did.

Variations at two adjacent areas on chromosome 13 of the parasite genome were strongly associated with drug resistance. The researchers estimate that this region accounts for at least one-third of the heritable variation in clearance rates.

The authors found several genes that could be responsible for artemisinin resistance. But there is no evidence that resistance evolved owing to mutations in these genes; instead, it may result from mutations in non-coding genetic sequences that change these genes' activity, says Cheeseman. "At this point, we’re still in the dark about the mechanism of resistance," he adds.

The study has "highlighted some key areas of the genome that we can focus on", says Dennis Kyle, who studies malaria resistance at the University of South Florida in Tampa.

The partial nature of artemisinin resistance, with the parasite still being affected by the drug, shows that the biology is complex, says Kyle. Resistance is likely to involve multiple genes, possibly in further genomic regions, making it a daunting task to discover the trait's complete genetic basis.

Furthermore, resistance is not easy to study in the lab, says Cheeseman, because there is currently no way to replicate the slow clearance of parasites.

There are signs that artemisinin resistance is a growing problem. A paper published this week in The Lancet2 reports that artemisinin resistance emerged along the border of Thailand and Myanmar at least eight years ago and continues to grow. Current plans for containment efforts that focus on a small area of Cambodia "will need to be swiftly re-evaluated", says Cheeseman.

"If these artemisinin-resistant parasites spread, it's going to be a problem," agrees Kyle. "We don't have a lot of back-up drugs."