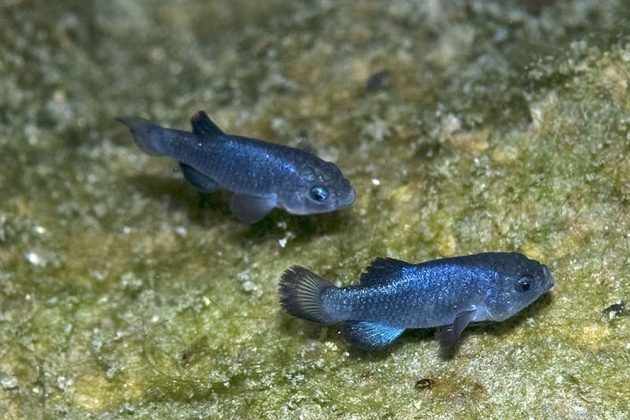 Olin Feuerbacher / US Fish and Wildlife Service / CC BY 2.0

A tiny fish species that is trapped in a hole in the desert in one of the hottest places on Earth might be younger and less isolated than scientists had thought.

The Devils Hole pupfish (Cyprinodon diabolis) — whose population dropped as low as 35 individuals in 2013 — lives in the Mojave desert in Nevada (near California's famous Death Valley National Park) inside an isolated, flooded cavern with just one opening onto the harsh desert landscape. The pupfish has evolved distinct differences from related species that live nearby, including reduced aggression, larger eyes and missing pelvic fins. It is endangered, and conservation biologists are trying to rescue the fish, including with a captive breeding program near Devils Hole.

Many researchers thought that the fish species had been isolated in its cavern from around 13,000 years ago — the last time major flooding occurred in the region. But Christopher Martin, an evolutionary biologist at the University of North Carolina, Chapel Hill, and his colleagues say that genetic sequencing suggests that the pupfish became trapped in Devils Hole somewhere between 105 and 830 years ago — and since then has continued to exchange genes with neighbouring populations of pupfish species.

“That was the big surprise,” says Martin.  “Every few hundred years there’s a fish or two that’s moving between the desert springs.” The fish either somehow move over land, he says, or are transported as eggs stuck to the feet of water birds.

Martin and his colleagues built up a family tree of pupfish species by examining differences in their DNA. To calibrate the dates of splits in this family tree, they relied partly on geological evidence from Lake Chichancanab basin in the Yucatan peninsula in Mexico. That basin now contains several pupfish species, but it was dry 8,000 years ago, so the species there now are likely to have diverged from the common ancestor they share with other pupfish only after that drought. 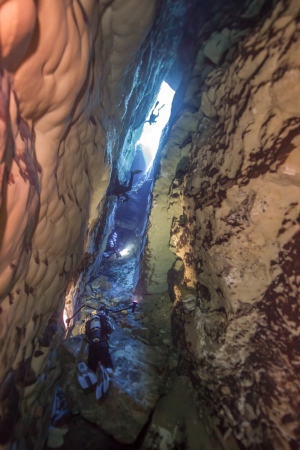 Martin’s analysis, published in the Proceedings of the Royal Society B1, suggests that DNA mutation rates can be much higher in pupfish than previously thought — and implies that the population of Devils Hole pupfish has not been isolated for long.

“This is a very interesting paper, and it deals with a fascinating study system. The short timeframe of evolution is really remarkable,” says Simon Ho, a computational evolutionary biologist at the University of Sydney, Australia. Ho says that the study adds to a growing body of evidence that some species might be much younger than earlier genetic comparisons had suggested, because DNA mutation rates can be very high over a short period of time2.

Anthony Echelle, a pupfish researcher at Oklahoma State University in Stillwater, points out that Martin’s analysis assumes that the entire basin in the Yucatan was dry 8,000 years ago. It is possible that pupfish, which are “among the hardiest of animals”, could have survived in patches of surface water in the Yucatan, Echelle says — meaning that the forming of the basin may not have marked such a definite splitting point in the pupfish family tree.

Inside the cunning, caring and greedy minds of fish

“Further study of the Lake Chichancanab basin is needed for greater confidence in the startling conclusions of this paper,” he says.

Whatever the conclusion about the age of their provenance, the Devils Hole pupfish are incredible fish, Martin says. They live in a hole that gets no direct sunlight for two months of the year and in water that is a near-constant 32 °C: “It’s amazing the fish can survive in there for a day.”