The preprint server arXiv.org is perhaps best known as the preserve of theoretical physicists and astrophysicists. But 2008 saw an influx of submissions of unpublished manuscripts, or preprints, by condensed-matter physicists who wanted to stake claims to the fast-moving subject of iron-based superconductors called pnictides. Now the life sciences may be on the cusp of their own ‘pnictide moment’, with population geneticists leading the charge. 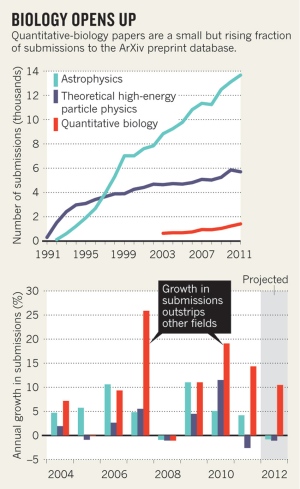 In the past month, leading research groups have posted to arXiv high-profile papers on the genetic history of southern Africans1 and Europeans2. Other prominent population geneticists have submitted methods-based papers to the server, which is hosted by Cornell University in Ithaca, New York. The number of biology papers on the server is still small in comparison with physical-sciences preprints (see ‘Biology opens up’), but Paul Ginsparg, a theoretical physicist at Cornell who founded arXiv in 1991 (ref. 3), welcomes what he hopes could be a sea change.

“It’s wonderful if biologists are belatedly joining the late twentieth century,” he quips. “Welcome to the party; better late than never.”

Life-sciences papers have existed on arXiv almost since its inception, but biologists have typically shied away from this approach amid fears of getting scooped, or of offending journals. It was only in 2003 that the site inaugurated a section specifically for papers on quantitative biology, or ‘q-bio’ for short. Yet papers posted to the section in the past tended to report esoteric models and methods, often from physical scientists dabbling in biology.

Rich in mathematics and steeped in the open-data traditions of genomics, population genetics would seem the ideal candidate to dip its toes into pre-publication, which brings the advantages of speed and open discussion. “I grew up in the physics community,” says Richard Neher, a population geneticist at the Max Planck Institute for Developmental Biology in Tübingen, Germany, “and putting things up on arXiv is a natural thing for me to do.” Neher has co-authored more than ten submissions to arXiv since 2004.

Despite such examples, one of the best-known life-sciences preprints on arXiv comes from microbiology, not population genetics. Posted as a rebuttal to a 2011 Science paper reporting that a strain of Halomonas bacteria from a Californian lake could incorporate arsenic into its DNA4, the preprint appeared on the server in January5 before its publication in Science this month6. Yet a population geneticist still played a part — the paper’s co-author, Leonid Kruglyak, of Princeton University in New Jersey and the Howard Hughes Medical Institute, works in the field. Kruglyak says he will consider arXiv for future studies from his lab.

Another attention-grabbing submission by prominent geneticists, posted on 23 July, compares genomic variation in 22 African populations to suggest an ancient genetic link between people in southern and eastern Africa1. One of the paper’s senior authors, geneticist David Reich of Harvard Medical School in Boston, Massachusetts, publishes routinely in Nature and the Public Library of Science journals, and co-author Carlos Bustamante, of Stanford University School of Medicine in California, is a leader in the field. Reich says that first author Joseph Pickrell, also at Harvard Medical School, suggested using arXiv. Reich and the other co-authors saw no good reason not to post the manuscript there. “It could be an example of the younger generation coming in and finding this sort of thing natural,” says Ginsparg.

For most life scientists, however, pre-publication is still “more of a trickle” than a trend, says statistical geneticist Graham Coop of the University of California, Davis. He and his postdoc, statistician Peter Ralph, posted a paper on 16 July analysing genetic relatedness among neighbouring European populations, and Coop remains bullish about arXiv’s potential. “Biology will soon have to embrace this trend fully: the speed of discussion, comment and pre-publication review allowed is needed in biology more than most fields,” he says.

Yet some population geneticists still feel that those posting to arXiv are sticking their necks out. Some biology journals, such as those published by the Ecological Society of America in Washington DC, for example, expressly prohibit pre-publication in citable public archives. And there are the concerns over establishing who was first to a discovery.

But Ginsparg says that pre-publication is more likely to stop scientists from being scooped. In many physics fields, publication on arXiv is what counts for claiming priority, and journal reviewers can use the server to check that discoveries are correctly attributed. An authoring history that accompanies all arXiv papers also allows scientists to arbitrate disputes over priority. In the 21 years since arXiv began, Ginsparg has seen astrophysicists, computer scientists and others go from sceptics to devotees. “Once a community adopts arXiv, it never seems to relinquish it,” he says.