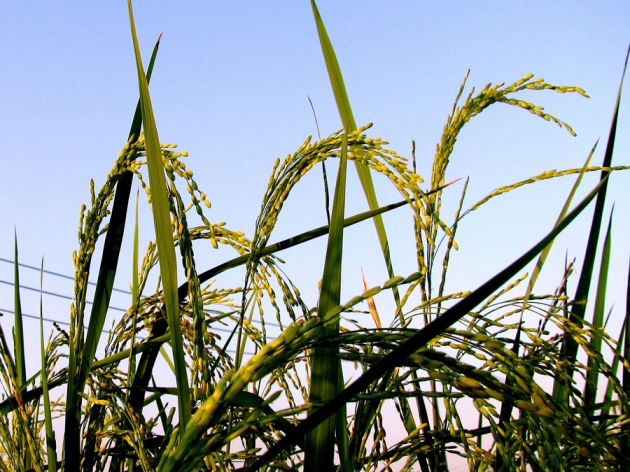 Weedy rice can pick up transgenes from genetically modified crop rice through cross-pollination.

A genetic-modification technique used widely to make crops herbicide resistant has been shown to confer advantages on a weedy form of rice, even in the absence of the herbicide. The finding suggests that the effects of such modification have the potential to extend beyond farms and into the wild.

Several types of crops have been genetically modified to be resistant to glyphosate, an herbicide first marketed under the trade name Roundup. This glyphosate resistance enables farmers to wipe out most weeds from the fields without damaging their crops.

Glyphosate inhibits plant growth by blocking an enzyme known as EPSP synthase, which is involved in the production of certain amino acids and other molecules that account for as much as 35% of a plant’s mass. The genetic-modification technique — used, for instance, in the Roundup Ready crops made by the biotechnology giant Monsanto, based in St Louis, Missouri — typically involves inserting genes into a crop’s genome to boost EPSP-synthase production. The genes are usually derived from bacteria that infect plants.

The extra EPSP synthase lets the plant withstand the effects of glyphosate. Biotechnology labs have also attempted to use genes from plants rather than bacteria to boost EPSP-synthase production, in part to exploit a loophole in US law that facilitates regulatory approval of organisms carrying transgenes not derived from bacterial pests.

Few studies have tested whether transgenes such as those that confer glyphosate resistance can — once they get into weedy or wild relatives through cross-pollination — make those plants more competitive in survival and reproduction. “The traditional expectation is that any sort of transgene will confer disadvantage in the wild in the absence of selection pressure, because the extra machinery would reduce the fitness,” says Norman Ellstrand, a plant geneticist at the University of California in Riverside.

But now a study led by Lu Baorong, an ecologist at Fudan University in Shanghai, challenges that view: it shows that a weedy form of the common rice crop, Oryza sativa, gets a significant fitness boost from glyphosate resistance, even when glyphosate is not applied.

In their study, published this month in New Phytologist1, Lu and his colleagues genetically modified the cultivated rice species to overexpress its own EPSP synthase and cross-bred the modified rice with a weedy relative.

The team then allowed the cross-bred offspring to breed with one another, creating second-generation hybrids that were genetically identical to one another except in the number of copies of the gene encoding EPSP synthase. As expected, those with more copies expressed higher levels of the enzyme and produced more of the amino acid tryptophan than their unmodified counterparts.

The researchers also found that the transgenic hybrids had higher rates of photosynthesis, grew more shoots and flowers and produced 48–125% more seeds per plant than non-transgenic hybrids — in the absence of glyphosate.

Making weedy rice more competitive could exacerbate the problems it causes for farmers around the world whose plots are invaded by the pest, Lu says.

“If the EPSP-synthase gene gets into the wild rice species, their genetic diversity, which is really important to conserve, could be threatened because the genotype with the transgene would outcompete the normal species,” says Brian Ford-Lloyd, a plant geneticist at the University of Birmingham, UK. “This is one of the most clear examples of extremely plausible damaging effects [of GM crops] on the environment.”

The study also challenges the public perception that genetically modified crops carrying extra copies of their own genes are safer than those containing genes from microorganisms. “Our study shows that this is not necessarily the case,” says Lu.

The finding calls for a rethinking of future regulation of genetically modified crops, some researchers say. “Some people are now saying that biosafety regulation can be relaxed because we have a high level of comfort with two decades of genetic engineering,” says Ellstrand. “But the study shows that novel products still need careful evaluation.”