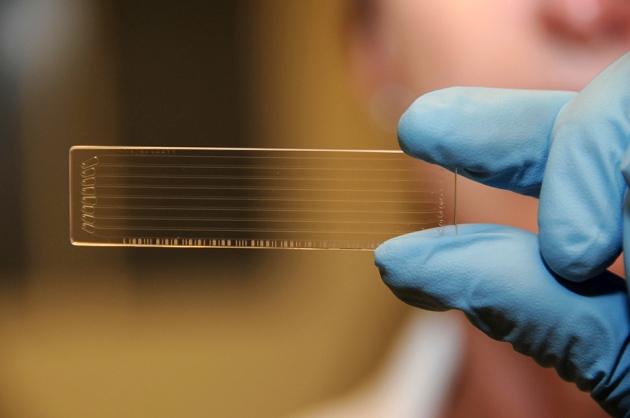 DNA analysis has reached the point that researchers are trying to detect traces of tumour DNA in blood.

A leader in genetic sequencing is betting that it can detect cancer at its earliest stages on the basis of minuscule amounts of genetic material circulating in a person's bloodstream. But specialists warn that there are many technical hurdles to such an application.

On 10 January, Illumina of San Diego, California, announced that it has formed a venture that will use genetic-sequencing technology to detect cancer through a simple blood test. Such a ‘liquid biopsy’ would identify tumour-specific DNA or RNA in the blood before a person has begun to show symptoms. Although many companies are working on aspects of this technology, the Illumina announcement made a splash because of its backing — US$100 million in funding, with investors including Bill Gates and Amazon founder Jeff Bezos's investment firm.

“It is great that large companies like Illumina are finally getting involved,” says Victor Velculescu, a cancer geneticist at Johns Hopkins University Kimmel Cancer Center in Baltimore, Maryland. He has founded a company called Personal Genome Diagnostics, which offers genetic screening of tumours in people who have already received a cancer diagnosis to help to guide their treatment. The new company, called GRAIL, will try to extend the technology by looking for genetic signs of cancer in people who are apparently healthy.

“Virtually all of the companies that have developed non-invasive prenatal tests are now realizing that perhaps they can modify their tests and apply them to cancer, which is a much more lucrative market,” says Bert Vogelstein, a cancer geneticist at Johns Hopkins and an adviser to Personal Genome Diagnostics.

One company, Pathway Genomics of San Diego, California, said last year that it would market a cancer-detection test directly to consumers. But in September, the US Food and Drug Administration cautioned the company that it had not provided sufficient evidence that its test is valid.

Illumina estimates that the market for a cancer-screening test performed once a year on healthy adults could be worth $20 billion to $100 billion, depending on how well it works. The company aims to market a test by 2019 that would check for many types of tumours. Reaching that goal would require a number of technical advances. Although about 10% of the DNA in a mother’s blood is estimated to come from a fetus, as little as 0.01% of circulating DNA in a person with asymptomatic cancer might come from a tumour; detecting that DNA without generating an unacceptable number of false positives will be extremely difficult.

It is also not clear how much information free-floating DNA can give about a tumour's location in the body. And it has yet to be demonstrated whether a genetic test would be able to discriminate lethal cancers that need immediate follow-up from non-lethal cancers that can be left alone. The inability of existing screening methods such as mammography to make such distinctions has sparked heated debates among physicians and health-policy specialists.

Dennis Lo, a chemical pathologist at the Chinese University of Hong Kong and a co-founder of Cirina, a company that is developing blood tests to detect cancer, says that GRAIL could help to solve some of these problems. In the past four years, researchers have demonstrated that tumour DNA circulating in the blood can be detected through genetic sequencing1; that such DNA has different characteristics from normal DNA, which may make it easier to detect2; and that it may be possible to use this circulating DNA to pinpoint the location of a tumour3.

Yet it remains to be seen whether those advances and others can be incorporated into a test that provides useful information to apparently healthy people and to their physicians. Richard Klausner, former head of the US National Cancer Institute and a director of GRAIL, says that the company will invest in the large clinical trials that are needed to show that the method is an improvement over currently available screening methods.

“GRAIL will undertake the most important and extensive clinical studies ever to answer important questions about the risks and benefits of these tests,” Klausner says.