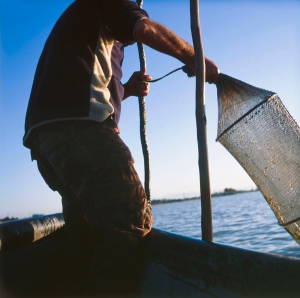 A Sardinian fisherman. Using DNA from men from the island, researchers have reconstructed a tree of paternal descent.

The Book of Genesis puts Adam and Eve together in the Garden of Eden, but geneticists’ version of the duo — the ancestors to whom the Y chromosomes and mitochondrial DNA of today’s humans can be traced — were thought to have lived tens of thousands of years apart. Now, two major studies of modern humans’ Y chromosomes suggest that ‘Y-chromosome Adam’ and ‘mitochondrial Eve’ may have lived around the same time after all1, 2.

When the overall population size does not change (as is likely to have happened for long periods of human history), men have, on average, just one son. In this case, evolutionary theory predicts that for any given man there is a high probability that his paternal line will eventually come to an end. All of his male descendants will then have inherited Y chromosomes from other men. In fact, it is highly probable that at some point in the past, all men except one possessed Y chromosomes that by now are extinct. All men living now, then, would have a Y chromosome descended from that one man — identified as Y-chromosome Adam. (The biblical reference is a bit of a misnomer because this Adam was by no means the only man alive at his time.)

In 1987 population geneticists first demonstrated the existence of such a ‘mitochondrial Eve'3. After analysing mtDNA from 147 people from around the world to chart their genetic relationships, they used a ‘molecular clock’, based on the number of DNA mutations that arise with each generation, to estimate Eve's age. This woman, the researchers concluded, probably lived in Africa around 200,000 years ago. The finding provided evidence for the theory that modern humans evolved in Africa before migrating to other continents.

Yet comparable studies later found that Adam, the common ancestor of the portion of the Y chromosome that passes from father to son, lived roughly 100,000 years ago. It’s possible that Adam and Eve lived aeons apart, and geneticists have come up with a number of explanations as to why.

Carlos Bustamante, a population geneticist at the Stanford University School of Medicine in California who led one of the latest studies, says that chance could explain the discrepancy between the ages of Adam and Eve. Polygamy could also help to explain the gap, he says. The calculation of when Adam or Eve lived depends on the number of breeding adults in a population, and polygamy reduces the number of males that pass on their Y chromosomes, thereby skewing the estimate.

Bustamante and his team sequenced the Y chromosomes of 69 males from around the world and uncovered about 9,000 previously unknown DNA sequence variations. They used these variations to create a more reliable molecular clock and found that Adam lived between 120,000 and 156,000 years ago. A comparable analysis of the same men's mtDNA sequences suggested that Eve lived between 99,000 and 148,000 years ago1. “This idea of a very recent common ancestor of all men is not that true,” Bustamante says.

Meanwhile, a team led by Paolo Francalacci, a population geneticist at the University of Sassari, Italy, came to a similar conclusion by studying the Y chromosomes of 1,200 men from the island of Sardinia. The team identified nearly 7,000 previously unknown Y-chromosome variations and used that detail to create their own molecular clock. The clock helped to pinpoint key events in Sardinian history, such as the rise of Neolithic populations there and the arrival of Africans as part of the Roman slave trade. It also suggested that Adam lived 180,000–200,000 years ago, similar to initial estimates of Eve’s age2.

Francalacci says that the difference between the two studies' estimates of Adam’s age could be due to the different populations they studied and how the molecular clocks were calculated. Bustamante says that, all in all, the two papers match up well. “It’s not so much we’re shifting the mitochondria down — which we are, a bit — but we’re pushing the Y farther back,” he says.

In recent years, many population geneticists have focused on interpreting the rest of the genome — the autosomes — because it provides a richer, more complicated, picture. But the latest studies suggest that the Y chromosome is still useful for studying human history, Bustamante says. His team calculated that the chromosome gains a new mutation roughly every 125 years, enabling geneticists to tell when two closely related populations split or how distant cousins are related.

“When we first started this project I thought, ‘Oh hum-hum we’re going to sequence some Y chromosomes and this is well-trod territory’, but it just kept getting more and more exciting,” he  says.

In February, for instance, researchers led by Michael Hammer, a population geneticist at the University of Arizona in Tucson, reported the discovery of an African American family whose Y chromosomes do not seem to directly descend from Adam's4. One possible explanation is that the Y chromosome came from an archaic species of human that interbred with Homo sapiens tens of thousands of years ago.

Yet Hammer sees the discrepancy between the age of the Y-Adam and that of the mitochondrial eve as a “red herring”, and he, as many other population geneticists, bristles at the use of biblical names. Because of the random nature of genealogy, he says, two different genetic lineages are unlikely to have common ancestors who lived in the same population at the same time.