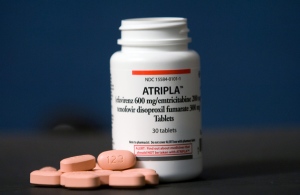 The drugs that make up HIV treatment Atripla will soon start to come off patent in the United States.

HIV remains a devastating scourge worldwide — and an expensive one. In the United States, where HIV care costs the most, the annual price of treatment averages almost US$20,000 per patient, and the federal government foots most of the bill. This year alone, the United States will spend nearly $15 billion on HIV care and medication, yet funding shortfalls mean that more than 2,000 patients remain on a waiting list for antiretrovirals, and many others are not receiving treatment for co-infections such as hepatitis C.

In the next few years, that economic burden looks set to ease as US patents on the ‘superstar’ HIV drugs begin to expire (see ‘Time’s up’). Generic versions of brand-name antiretrovirals, whose use is permitted in the developing world, could reduce the cost per patient and allow the US budget to stretch further. “AIDS, as we currently know it, may become much more affordable,” says John Bartlett, an infectious-disease researcher at Johns Hopkins Bloomberg School of Public Health in Baltimore, Maryland.

Earlier this year, the HIV/AIDS working group at the Department of Health and Human Services asked Rochelle Walensky — an infectious-disease physician at Massachusetts General Hospital in Boston who is known for her cost-effectiveness analyses — for an opinion on the impact of a switch from Atripla, a widely used 3-in-1 HIV pill, to a combination of generic and brand-name drugs might be. Atripla is the first of four first-line drug combinations recommended by US guidelines that will be affected by patent expiries. A key component of the pill will lose protection next year.

At last month’s International AIDS Conference in Washington DC, Walensky announced that the switch would save the United States a projected $920 million in the first year alone. She estimates that Atripla — a co-formulated pill from Gilead Sciences in Foster City, California, that consists of brand-name emtricitabine, efavirenz and tenofovir — costs about 40% more than an alternative three-pill regimen. This would include: generic lamivudine, which can be used as a substitute for emtricitabine; a generic version of efavirenz that is expected to hit the market once the brand goes off-patent in 2013; and brand-name tenofovir.

In her presentation, Walensky estimated that the replacement could be slightly less effective than Atripla, not least because patients are more likely to skip doses when they have to swallow several pills. But the difference is small, according to Walensky’s model: staying with Atripla rather than switching to the three-pill regimen would add 4.4 months to a patient’s life, but $42,500 to their bill.

Even in the United States, where discussions of cost-effectiveness in health care are politically charged, this cost-benefit ratio may be too high for any health-care innovation. “I’m a doctor and I would never want to put a patient on a lesser drug — but we do have to think about trade-offs,” Walensky says. In this case, she says, the trade-off could be between a slightly less-effective treatment for the individual but greater care for people with HIV overall.

Patient groups are not immune to this reasoning. “Although there’s a convenience factor to having one pill once a day, if the trade-off is many people having no access to medication, then it’s better to split up the pill or use the threat of splitting it to get Gilead to reduce their prices,” says Michael Weinstein, president of the AIDS Healthcare Foundation, an advocacy organization based in Los Angeles, California. Gilead would not comment directly on pricing, but a spokeswoman told Nature, “We believe there is a lot of data supporting the value of single-tablet regimens”.

Analogous questions will arise as several other first-line medicines lose patent protection over the next five years. If generic versions are embraced in the United States, drug companies will feel a squeeze that they say could inhibit the development of new HIV drugs. But some say a widespread switch is unlikely to happen, noting that newer patented drugs are on the way, including Gilead’s Quad, a combination therapy slated for approval by the US Food and Drug Administration on 27 August. This 4-in-1 pill contains a novel integrase inhibitor, and outperformed Atripla in clinical trials. If the bulk of patients switch directly from Atripla to Quad, Gilead will retain its hold on the US market.

Bartlett argues, however, that the semi-generic substitute may become popular among the thousands of people who currently control HIV with Atripla, with Quad reserved for those in need of an alternative. With so many drugs going off-patent, he predicts, “In ten years this will be a disease treated for $200 per year, or less”.