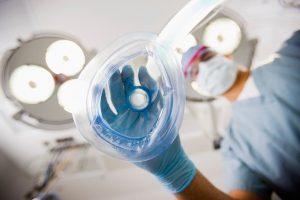 General anaesthetics induce a coma-like state within seconds, allowing patients to be operated on without feeling pain or discomfort. Yet very little is known about how these drugs work. Now research published today in the Proceedings of the National Academy of Sciences1 shows that they change the activity of specific regions of the brain and make it difficult for the different parts to talk to each other.

Neuroscientist Laura Lewis of the Massachusetts Institute of Technology in Cambridge and her colleagues used microelectrodes to measure the activity of single cells and networks of neurons in the brains of three people who were about to undergo neurosurgery for epilepsy. Each patient was given a single dose of the general anaesthetic propofol, and their ability to respond to auditory stimuli was used to determine when they slipped into unconsciousness.

The researchers found that loss of consciousness coincided with the rapid onset of brain waves known as slow oscillations.

“We were surprised to find that slow oscillations began so abruptly,” says Lewis. “Their onset was sudden, and precisely timed to when patients lost consciousness.”

The oscillations started at different times in different regions of the cerebral cortex, and individual neurons became markedly less active overall, with their activity spiking at the same time as the slow oscillations in that region.

The researchers propose that the slow oscillations are making the processing of information within specialized brain regions less efficient, and preventing different parts of the brain from communicating with each other.

“The finding that they were asynchronous across the brain provides a new explanation for how slow oscillations could disturb communication between different brain areas,” says Lewis.

Lewis and her colleagues say that it is possible that their participants may have different brain activity from healthy people because of their seizures and the medication that they had been taking for their epilepsy. But they think this is unlikely, because they placed the electrodes at least 2 centimetres away from the abnormal tissue causing the seizures, and because the behavioural effects were the same as those seen in healthy people.

The researchers say that their findings could lead to improved ways to monitor the effects of anaesthesia, and to the development of better anaesthetic drugs.

They now plan to investigate whether other general anaesthetics act in the same way. “It's very likely that this will apply to other anaesthetic drugs,” says Lewis.