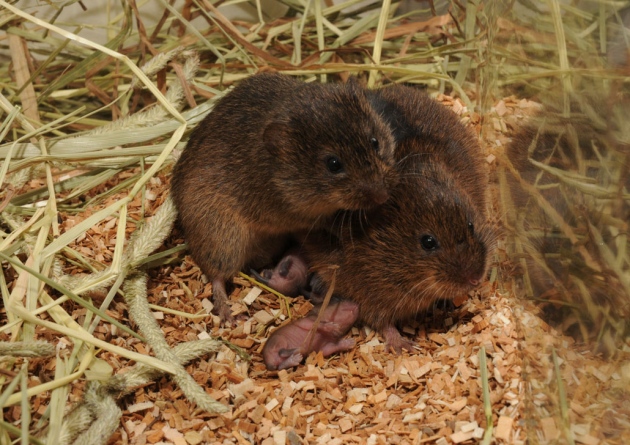 Mating normally induces prairie voles to form lifelong bonds, but researchers found that they could cause the same blissful response by activating certain genes in the rodents' brains.

Love really does change your brain — at least, if you’re a prairie vole. Researchers have shown for the first time that the act of mating induces permanent chemical modifications in the chromosomes, affecting the expression of genes that regulate sexual and monogamous behaviour. The study is published today in Nature Neuroscience1.

Prairie voles (Microtus ochrogaster) have long been of interest to neuroscientists and endocrinologists who study the social behaviour of animals, in part because this species forms monogamous pair bonds — essentially mating for life. The voles' pair bonding, sharing of parental roles and egalitarian nest building in couples makes them a good model for understanding the biology of monogamy and mating in humans.

Previous studies have shown that the neurotransmitters oxytocin and vasopressin play a major part in inducing and regulating the formation of the pair bond. Monogamous prairie voles are known to have higher levels of receptors for these neurotransmitters than do voles who have yet to mate; and when otherwise promiscuous montane voles (M. montanus) are dosed with oxytocin and vasopressin, they adopt the monogamous behaviour of their prairie cousins.

Because behaviour seemed to play an active part in changing the neurobiology of the animals, scientists suspected that epigenetic factors were involved. These are chemical modifications to the chromosomes that affect how genes are transcribed or suppressed, as opposed to changes in the gene sequences themselves.

To look for clues of epigenetic agents at play in monogamous behaviour, neuroscientist Mohamed Kabbaj and his team at Florida State University in Tallahassee took voles which had been housed together for 6 hours but had not mated. The researchers injected drugs into the voles' brains near a region called the nucleus accumbens, which is closely associated with the reinforcement of reward and pleasure. The drugs blocked the activity of an enzyme that normally keeps DNA tightly wound up and thus prevents the expression of genes.

“Mating activates this brain area which leads to partner preference — we can induce this same change in the brain with this drug,” Kabbaj explains.

Interestingly, the injection alone cannot induce the partner preference. “The drug by itself won't do all these molecular changes — you need the context: it’s the drug plus the six hours of cohabitation,” says Kabbaj.

“This is a study I myself wanted to do years ago,” says Thomas Insel, who heads the US National Institute of Mental Health in Bethesda, Maryland. “If mating causes the release of the neuropeptide, how does this kick into a higher gear for the rest of the animal’s life? This study for me really is the first experimental demonstration that the epigenetic change would be necessary for the long-term change in behaviour.”

“This paper really shows that there is an epigenetic mechanism underlying pair bonds — we ourselves have looked for that and not found it,” says Alaine Keebaugh of Emory University in Atlanta, Georgia, who also studies the neuroscience of prairie voles.

Kabbaj says he hopes that the work could ultimately lead to an enhanced understanding of how epigenetic factors affect social behaviour in humans — not only in monogamy and pair bonding, but also in conditions such as autism and schizophrenia, which affect social interactions.