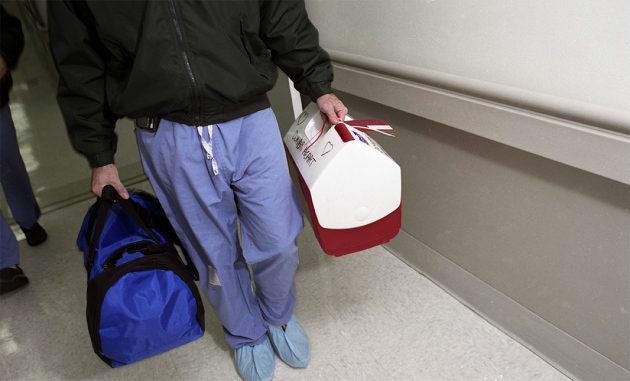 Tissues are taken from organ donors after consent has been given by their loved ones.

Sharon Napper was getting ready for school one morning five years ago, when her four-year-old daughter said, “Daddy fell off the bed.” Her husband, Ronald, a retired US Marine who worked as a police officer on an army base, was lying on the floor. He had suffered an aneurysm that spread to the temporal artery in his head.

At the hospital, the only way to relieve the swelling would have been to open Ronald’s skull, leaving him unable to eat or breathe on his own. “There was a quality-of-life issue. We had discussed this, and so I let everything kind of take its course,” says Napper, who had been planning Ronald’s 50th birthday party the evening before.

The couple had previously discussed Ronald’s desire to be an organ donor, but another request followed: would Napper also donate his tissues for research after he died?

Ronald’s myriad tissues, and those of almost 1,000 other anonymous deceased donors, are now the basis of a first-of-its-kind database. Supported by the US National Institutes of Health, the US$150-million Genotype-Tissue Expression (GTEx) project is amassing data about gene sequences and activity, and other information, across 44 types of tissue, from blood vessels to 10 different brain regions.

“It’s creating a ‘Google Maps’ of the body.”

“It’s creating a ‘Google Maps’ of the body,” says Kristin Ardlie, a geneticist at the Broad Institute of MIT and Harvard in Cambridge, Massachusetts, who is part of the project’s data-analysis team. It routinely releases new data, which are freely available to qualified researchers. And in this week’s Nature, GTEx is publishing its latest and biggest analysis, based on tissue from 449 donors1–4.

In assembling so much information from such a large number of deceased donors, the project has raised some thorny ethical issues concerning informed consent and scientists’ moral obligations to families who donate the tissues of their loved ones for nothing in return.

The study aims to plug a gap in the search for the genetic origins of disease. Scientists have identified thousands of DNA variants linked to different conditions, but most lie in stretches of the genome that are devoid of protein-coding genes and are, instead, likely to alter the activity of other genes. By relating genes active in different tissues to variations in donors’ genomes, researchers hope that GTEx can join the dots between non-coding variants and gene expression.

When the project was proposed in 2008, many researchers were sceptical that it could succeed, says Manolis Dermitzakis, a human geneticist at the University of Geneva Medical School in Switzerland and an early proponent of GTEx. That is because RNA molecules (a readout of gene activity) start to decompose after a person dies, and no one had ever attempted to measure gene expression in so many different tissues across so many people.

The challenge of amassing that much human tissue wasn’t merely technical. Soon after learning of the deaths of their loved ones, the relatives of GTEx donors, such as Sharon Napper, were asked to donate dozens of tissue samples and to consent to the genome, medical history and other data of their loved ones being made widely available to researchers, albeit with most identifying details removed.

“They are being asked to donate to this strange project about which they have never heard anything like it before,” says Laura Siminoff, a bioethicist at Temple University in Philadelphia, Pennsylvania, who led a project on GTEx that involved re-contacting donor families to see how they felt about the entire process. Her team found that the stress of suddenly losing a family member had fogged people’s memories of what they had consented to. Most recalled that they had agreed to donate their relatives’ tissue for research, but often didn’t recall much else.

Siminoff suggests that some form of genetic counselling should be made part of the informed-consent pro­cess for tissue-donation projects such as GTEx. She also thinks that the project missed an opportunity by seeking tissue donations only from organ donors, because African Americans, Latinos and other ethnic-minority groups are less likely to register.

Larry Gavan donated his older brother Mark’s tissues to GTEx in August 2014, he says, even though he and his family weren’t entirely clear how they would be used. Mark, who died of cardiac arrest following a stroke, was born with type 1 diabetes and had lost most of his sight. Gavan says his family saw the donation of Mark’s tissues as “an opportunity to make a contribution to future people’s lives and be directly related to the diseases my brother suffered from.”

“We should also think about what we can do for people who are generous and make these kinds of donations that benefit everybody.”

Napper, who along with other donor families was part of a GTEx community advisory group, emphasized that altruism motivated her decision to donate her husband’s tissues. But Siminoff’s research has found5 that most donor families, including Napper’s, want to know the results of tests, such as genome sequencing, conducted on the remains of their loved ones.

The study was not designed to return such findings. But Nicole Lockhart, a programme director at the National Human Genome Research Institute in Bethesda, Maryland, who coordinated the ethical, legal and social aspects of GTEx, says that future tissue-donation studies might consider providing families with medically important results.

“A standing policy of simply ‘we will not return results’ is becoming less and less common,” says Susan Wolf, a lawyer and bioethicist at the University of Minnesota in Minneapolis. Studies such as GTEx should plan to enable families to be identified if researchers discover, for instance, a mutation that dramatically increases the risk of cancer for relatives who inherit it, she says.

GTEx and other tissue-donation studies are likely to offer enormous benefits to scientists and companies (which can also apply for free access to the data), says Siminoff. “We should also think about what we can do for people who are generous and make these kinds of donations that benefit everybody.”

Napper, who works as a nurse in cancer and chemotherapy, accepts that her late husband’s tissues are now a code in the GTEx database. But, still, she checks the study’s website to keep track of new research (191 studies are listed on the project website, and several more appear today in Nature and other journals). She sees his participation as an important legacy for their family, which includes six sons, two daughters and nine grandchildren.

In June, she and other GTEx donor families attended the project’s annual meeting in Rockville, Maryland. She met some of the scientists involved, who told her about the research they were doing on tissues such as those from her husband. “To know he’s still there is a wonderful thing,” she says.