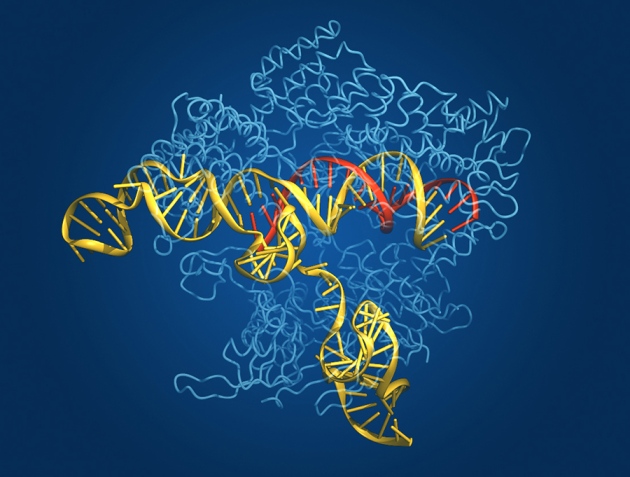 Image by Bang Wong with source material from Feng Zhang, courtesy of the Broad Institute

The Cas9 system, shown here, is hugely popular in labs but may not be effective at fixing point mutations.

A painstaking re-engineering of the CRISPR gene-editing system has given researchers the ability to alter individual DNA letters efficiently in a given gene. The advance boosts the success of such edits, and could boost scientists’ ability to model human diseases and develop treatments for them.

Researchers have been quick to embrace a gene-editing tool called CRISPR–Cas9, which lets them modify targeted genes with unprecedented ease. But although it is easy to use the tool to wipe out a gene’s function, it has been difficult to fix a ‘point mutation’ — caused by a change in a single DNA letter in a given gene — by correcting just the letter affected.

Those point mutations are important. “It turns out that the majority of disease-associated human genetic variants are point mutations,” says David Liu, a chemical biologist at Harvard University in Cambridge, Massachusetts. “But current genome methods correct point mutations much less efficiently and much less cleanly than we can disrupt a gene.”

Cas9 is an enzyme that can be targeted to a specific site in the genome by a guide RNA molecule. Once it finds a DNA sequence that matches the guide RNA, it breaks both strands of the double helix at that spot. Cells respond by healing the break, but tend to do so in a sloppy way, often inserting or deleting DNA letters, called bases. The result is usually a disabled gene.

Researchers can try to encourage another form of repair by providing a DNA template that the cell can use as a guide, so that repair enzymes insert a matching DNA sequence into the break. But this method is generally successful less than 5% of the time — and sometimes much less. The rest of the repairs are done the sloppy way.

So Liu and his team, including fellow Harvard chemical biologist Alexis Komor, set out to find a way to edit the genome without breaking it. They disabled the Cas9 enzyme so that it would no longer cut DNA, then tethered it to an enzyme capable of chemically converting one DNA letter to another: a cytosine (‘C’) to a uridine (‘U’). Uridines are usually found in RNA rather than DNA; in DNA, the cell reads them as if they were the ‘T’ base, thymidine. A guide RNA would direct the disabled Cas9 to its target in the genome, where the modified enzyme would change the DNA sequence rather than break the helix.

The engineered enzyme worked on isolated DNA in test tubes about 44% of the time — a significant improvement, the team reports in Nature1. But in cells, the efficiency was only 7.7% at best. One problem was that the enzyme was making changes to only one strand of DNA, creating a mismatch with the other strand. The cell was correcting that mismatch, undoing the work of the engineered enzyme.

Liu’s team tacked another protein onto their engineered Cas9 to block the removal of U bases from DNA, and made a few other tweaks. The resulting base editor, as Liu calls it, corrected mutations associated with Alzheimer’s disease in mouse cells grown in culture with an efficiency of up to 75%, the researchers report. The base editor was also able to correct a mutation in a cancer-associated gene with up to 7.6% efficiency in human cells. The standard CRISPR-Cas9 method failed to do so at all.

There are hundreds of other disease-associated mutations that could be corrected using a C to U switch, says Liu. But the team is now working to expand its reach to other point mutations, and to try the technique in animals. Liu hopes that his tricked-out enzymes will make it easier to create animal models that carry human mutations associated with disease. And eventually, after years of testing and refinement, the modified Cas9 could even be used to treat disease.

The method could also be expanded to other enzymes. An alternative to Cas9, called Cpf1, was characterised last year2 and may be better for inserting sequences into genes. Two papers published by Nature on 21 April shed new light on how Cpf1 works. One shows how the enzyme changes shape when bound to its guide RNA3; the other describes a Cpf1 enzyme capable of cleaving both DNA and RNA4.

Stanley Qi, a bioengineer at Stanford University in California, is eager to give Liu’s modified Cas9 a try. He says that the method could be much simpler than the old CRISPR method one, which requires inserting a DNA template that is prone to degradation and was sometimes even toxic to cells. “This avoids a major barrier,” he says. “It really expands the scope of CRISPR’s applications.”