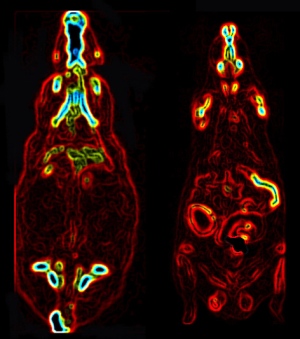 Tomography imaging shows that diabetic rats take up more glucose in their intestines after gastric bypass surgery (right) than before (left).

A procedure increasingly used to treat obesity by reducing the size of the stomach also reprogrammes the intestines, making them burn sugar faster, a study in diabetic and obese rats has shown.

If the results, published today in Science1, hold true in humans, they could explain how gastric bypass surgery improves sugar control in people with diabetes. They could also lead to less invasive ways to produce the same effects.

“This opens up the idea that we could take the most effective therapy we have for obesity and diabetes and come up with ways to do it without a scalpel,” says Randy Seeley, an obesity researcher at the University of Cincinnati in Ohio, who was not involved in the work.

As rates of obesity and diabetes skyrocket in many countries, physicians and patients are turning to operations that reconfigure the digestive tract so that only a small part of the stomach is used. Such procedures are intended to allow people to feel full after smaller meals, reducing the drive to consume extra calories. But clinical trials in recent years have shown that they can also reduce blood sugar levels in diabetics, even before weight is lost2, 3.

“We have to think about this surgery differently,” says Seeley. “It’s not just changing the plumbing, it’s altering how the gut handles glucose.”

Nicholas Stylopoulos, an obesity researcher at the Boston Children’s Hospital in Massachusetts, and his colleagues decided to learn more about this mechanism by studying one of the most popular weight-loss procedures, the Roux-en-Y bypass. The surgery reduces the stomach to about the size of a hen's egg, and rearranges the intestines into the shape of a Y. The arm of the Y that is connected to the reduced stomach pouch is called the Roux limb.

Stylopoulos and his team performed the surgery on obese and non-obese diabetic rats, and then watched for changes in the Roux limb. They found that blood levels of compounds and proteins indicative of sugar use were higher in these rats than in controls that underwent a sham operation. The researchers then injected the Roux-en-Y-treated rats labelled glucose and imaged the animals' digestive tracts. They found that the Roux limb was taking up and using the sugar, perhaps to compensate for receiving fewer digested nutrients from the shrunken stomach.

The team now hopes to study this process in biopsies from humans who have undergone the procedure, says Stylopoulos. In particular, he and his colleagues want to focus on the role of a protein called GLUT1, which transports glucose into cells. Rats that had been given a Roux-en-Y bypass had higher levels of GLUT1 in the Roux limb than controls, and chemically inhibiting the protein halted the uptake of labelled glucose by the Roux limb.

That, says Stylopoulos, suggests that GLUT1 may be a useful target in the hunt for drugs that could reproduce the effects of a gastric bypass.

The hunt may heat up as surgeons weigh the risks of performing bypasses on obese children, and on adults with diabetes who are only slightly overweight, notes Stylopoulos. “It’s all still very controversial,” he says. “The hope is that one day we can bypass the bypass.”