This month, scientists will test a new way to extract methane from beneath the frozen soil of Alaska: they will use waste carbon dioxide from conventional wells to force out the desired natural gas.

The pilot experiment will explore the possibility of ‘mining’ from gas hydrates: cages of water ice that hold molecules of methane. Such hydrates exist under the sea floor and in sandstone deep beneath the Arctic tundra, holding potentially vast reserves of natural gas. But getting the gas out is tricky and expensive. 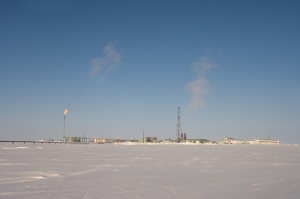 Natural gas could be coaxed out of its icy prison below the permafrost by injecting waste carbon dioxide into the wells.

The test is to be run by the US Department of Energy (DOE), in conjunction with ConocoPhillips, an oil company based in Houston, Texas, and the Japan Oil, Gas and Metals National Corporation. The researchers will pump CO2 down a well in Prudhoe Bay, Alaska, into a hydrate deposit. If all goes as planned, the CO2 molecules will exchange with the methane in the hydrates, leaving the water crystals intact and freeing the methane to flow up the well.

Conventional wells in the Prudhoe Bay gas fields contain a very high concentration of carbon dioxide — about 12% of the gas. “You have to find something to do with it,” says Ray Boswell, technology manager for methane hydrates at the DOE’s National Energy Technology Laboratory in Morgantown, West Virginia. One way to dispose of it is to bury the gas underground. Excess carbon dioxide is already pumped down some conventional wells to encourage extraction of the last bits of natural gas; using it to extract methane from hydrates might be a good idea too.

The test will use the Ignik Sikumi well, which was drilled on an ice platform in Prudhoe Bay last winter. Specialized equipment has been installed, including fibre-optic cables to measure the temperature down the well, and injection pipes for the CO2. “None of this is standard equipment; it had to be built to design,” says Boswell.

ConocoPhillips helped the team to get access to the site. “That’s one of the biggest hurdles — getting industry to let you do an experiment in their field,” says Boswell, who has been working to arrange such tests in Alaska since 2001. “There’s a lot of inertia to overcome. Prudhoe is where they make their money,” he adds.

During the test, the researchers will inject nitrogen gas into the hydrate deposit to try to push away any free water in the system, which would otherwise freeze into hydrates on exposure to CO2 and block up the well. The next phase is to pump in isotopically labelled CO2, and let it ‘soak’ for a week before seeing what comes back up. This will help to test whether the injected carbon is really swapping places with the carbon in the hydrates. Finally, the team will depressurize the well and attempt to suck up all the methane and carbon dioxide. This will also give them a chance to test extraction using depressurization — sucking liquids out of the hydrate deposits to reduce pressure in the well and coax the methane out of the water crystals. “We’ll continue to depressurize until we run out of time or money, and see how much methane we can get out that way,” says Boswell.

This is not the first attempt to extract methane from hydrates. In 2002, experiments at the Mallik Field site in northern Canada pumped hot water underground to 'melt' hydrates and release the methane. In 2008, further tests at the same site tried depressurization. That scheme seems most likely to be commercially viable, says Boswell. “The tests were very short and the modelling has so many moving parts, no one knows exactly what the production rate will be,” he says. “But the test well produced more than the models said it would.”

“There’s a perception out there that’s this is a wild fantasy. That’s not true.”

The CO2–methane exchange method to be tested at Prudhoe Bay removes the need to either add water or dispose of extracted fluids, and doesn’t risk destabilizing the ground by melting the hydrate. It also has the added bonus of getting rid of unwanted gas, which would offset the price of commercial operations. “It doesn’t have to produce methane at a great rate, because you’re also disposing of CO2,” says Boswell.

“The concept is very alluring,” says Scott Dallimore, a hydrate expert with the Geological Survey of Canada in Sidney, British Columbia. “Gas fields in this area have a relatively high CO2 concentration. If this CO2 can be re-injected while at the same time producing methane, it will be a terrific option.”

Commercialization is still a long way off. The United States has no urgent need to mine methane hydrates, says Boswell, because it will continue to have access to much cheaper natural-gas resources for some time to come. Japan is much closer to commercialization: the country plans to open a short-term production well in the offshore Nankai Trough in 2013, with the aim of running a longer production test in 2015. The country is “quite eager” to explore the potential of hydrates, says Boswell, because it has few other fossil-fuel resources.

“There’s a perception out there that this is a wild fantasy. That’s not true. I am convinced that the research community has already demonstrated the technical viability of gas-hydrate production,” says Dallimore. “When it comes to the question of commercial viability, things become more complex.”