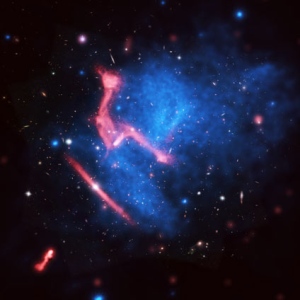 In this image of colliding galaxy clusters MACS J0717+3745, blue represents x-rays (seen by the Chandra observatory) and red radio waves (from the Very Large Array); the background image comes from the Hubble Space Telescope.

A cosmic train wreck is piling up, and astronomers have a new and improved view.

Four massive clusters of galaxies are plowing into one another at a crash site about five billion light-years from Earth. The conglomeration is creating one giant concentration of thousands of galaxies. “This is really one of the most massive clusters we know of and one of the most complex mergers we know of,” said Reinout van Weeren of the Harvard–Smithsonian Center for Astrophysics (CfA) in Boston, Massachusetts, who presented the latest observations Tuesday here at the 224th meeting of the American Astronomical Society.

The Hubble Space Telescope previously captured images of the pileup, called MACS J0717+3745, in optical light. Now the orbiting Chandra X-Ray Observatory and the Very Large Array in New Mexico have observed the cluster in x-ray and radio light, respectively. The new views reveal features that were not visible before, such as a bright and oddly shaped band of radio light at the center of the cluster merger scientists suspect is radiation emitted by highly energetic charged particles. The fact that this feature overlaps with an area of extremely hot gas — more than 100 million kelvins — revealed in x-ray data suggests that here a powerful heat shock is acting as a cosmic particle accelerator, speeding up particles to tremendous energies.

Such naturally arising particle accelerators have been observed before, most commonly in the remnants of supernovae. But MACS J0717+3745 may turn out to be one of the most powerful particle accelerators known. The observations suggest the particles there are reaching energies up to a million times those in Earth-bound atom smashers, such as the Large Hadron Collider in Switzerland.

In some ways this clash of galaxy clusters is less violent than it sounds. “It’s a very slow process,” van Weeren said. “Most of the galaxies just fly past each other. But gas collides and gets shock heated.” When clouds of gas slam into one another, they warm up, causing a shock front where magnetic fields get compressed. These fields cause particles to travel back and forth over the front, picking up energy from the heat of the gas during every crossing. Eventually, the particles become so energetic that they escape and fly out into space. Scientists hope to study them further to learn if clusters like this one are behind many of the cosmic-rays (high-speed particles) that barrel into Earth’s atmosphere from space.

The new observations of MACS J0717+3745 also reveal very distant galaxies whose light has been bent and magnified by the gargantuan gravity collected among the four colliding clusters. The phenomenon, called gravitational lensing, is a consequence of Einstein’s general theory of relativity, which shows that mass bends spacetime around it, causing light to travel a curved path. “This cluster is so complicated, and the magnification is very interesting,” said William Forman, also of the CfA.

The enormous amount of mass collected in MACS J0717+3745 makes it one of the best gravitational lenses known. Later this year astronomers plan to use Hubble to observe the object again as part of the Space Telescope Science Institute’s Frontier Fields program, which takes very long exposures to make some of the deepest images of the cosmos ever created (see 'Hubble telescope reveals deepest view of the Universe yet'). The lensing provided by MACS J0717+3745 gives Hubble an extra boost to see even deeper than it otherwise would. “It’s probably the best cosmic telescope on our sky,” says Dan Coe, an astronomer at the institute who works on Frontier Fields. “It magnifies more of the distant universe than any other galaxy cluster yet studied.”