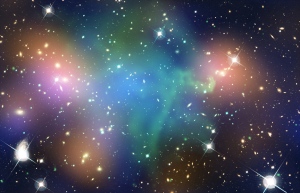 Astronomers have for the first time detected how the 600-kilometre-per-second motion of galactic clusters affects the cosmic microwave background. The results, which were posted online in March1 and are soon to appear in Physical Review Letters, confirm a 40-year-old prediction and provide a new way to investigate the evolution of large-scale structure in the Universe.

The cosmic microwave background (CMB) was created almost 14 billion years ago, shortly after the Big Bang, when the opaque plasma that filled the Universe cooled and became transparent, sending an afterglow of light in all directions. In 1970, the astrophysicists Rashid Sunyaev and Yakov Zel'dovich posited2 that as the CMB streamed through galactic clusters, its photons would scatter off electrons whizzing through regions of hot, ionized gas, and would gain a minor boost in energy. Within years, astronomers observed this thermal Sunyaev–Zel'dovich effect.

In 1972, Sunyaev and Zel'dovich predicted3 a much more subtle 'kinematic' Sunyaev–Zel'dovich effect (kSZ), in which the energies of CMB photons are altered by the motion, rather than the temperature, of galaxy clusters. A cluster moving away from an observer on Earth would decrease the CMB's temperature by roughly one-millionth of a degree, whereas a cluster moving towards the observer would increase it by a similar amount.

For decades, research teams attempted in vain to detect the kSZ. Even today, no telescope on the ground can measure the fine gradations in CMB temperature that would be produced by a single galactic cluster. But Arthur Kosowsky, an astronomer at the University of Pittsburgh in Pennsylvania, suggested that the solution was to look for the kSZ in aggregate, by examining a large sample of paired galaxy clusters.

“Because of their gravitational interactions, these cluster pairs tend to move toward each other,” says David Spergel, an astrophysicist at Princeton University in New Jersey who has collaborated with Kosowsky. “That typically means that as they are drawn together, the more distant cluster in a pair will be moving toward you, making a CMB hotspot, while the closer cluster will be moving away, making a CMB coldspot. Averaging over thousands of cluster pairs, you can see the signal of the kSZ in this temperature difference.”

Between 2008 and 2010, a team of researchers using the Atacama Cosmology Telescope (ACT) in Chile mapped CMB temperature variations in a large swathe of the sky. To link the variations to cluster pairs, however, required a second data set, from the Baryon Oscillation Spectroscopic Survey (BOSS), part of the Sloan Digital Sky Survey-III at Apache Point Observatory in New Mexico.

BOSS observed the same region of sky in visible light, to create a three-dimensional map of more than 27,000 galaxies. Nick Hand, then a student of Spergel's and now an astronomy PhD student at the University of California, Berkeley, measured the kSZ by comparing the ACT data with the 7,500 most luminous galaxy clusters in the BOSS data set.

Neither the ACT nor BOSS was designed with the goal of detecting the kSZ, says Hand. “This collaboration was a consequence of the era of large data sets that astronomy is currently in.”

Spergel says that the technique has not yet yielded any new insights, but “will scale up beautifully”. The growing sample of galaxies that have been spotted by surveys such as BOSS, paired with upgrades to microwave detectors on the ACT and the South Pole Telescope, another CMB observatory, will soon provide more numerous and precise kSZ measurements, he says. This will allow astronomers to improve their estimates of the velocities of distant galaxies — crucial to understanding the properties of dark energy and dark matter — and of the intergalactic distribution of matter, which will help them to investigate galactic formation and evolution.

Spergel thinks that the most likely long-term use of the technique will be in measuring the intergalactic distribution of the ordinary matter in the Universe.

“Of the ordinary matter we believe exists in and around galaxies,” he says, “we see about a third as stars and molecular gas clouds. Most of the remaining two-thirds is probably ionized in the space between galaxies, but we haven't had a good way to see it, and that means we don't really know the history of the typical atom. Does it fall into galaxies and then get blown out by supernovae explosions, or does it never really get incorporated in the galaxies and always sit at their outskirts? Is there a cycle? We can trace much of this using the kSZ, since the effect's strength depends on the distribution of electrons in a cluster's ionized gas.”