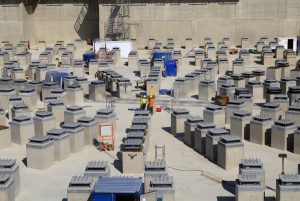 Though the foundations have been laid, construction of ITER is being delayed by the complicated way in which contracts are dealt with.

The world's largest scientific project is threatened with further delays, as agencies struggle to complete the design and sign contracts worth hundred of millions of euros with industrial partners, Nature has learned.

ITER is a massive project designed to show the feasibility of nuclear fusion as a power source. The device consists of a doughnut-shaped reactor called a tokamak, wrapped in superconducting magnets that squeeze and heat a plasma of hydrogen isotopes to the point of fusion. The result should be something that no experiment to date has been able to achieve: the controlled release of ten times more energy than is consumed.

That's the dream. But so far, ITER has been consuming mostly money and time. Since seven international partners signed up to the project in 2006, the price has roughly tripled to around €15 billion (US$19.4 billion), and the original date of completion has slipped by four years to late 2020. Many of the delays and cost increases have come from an extensive design review, which was completed in 2009 (see 'Fusion dreams delayed').

Now, sources familiar with the project warn that the complex system for buying ITER's many pieces could put the project even further behind schedule. Rather than providing cash, ITER's partners have pledged 'in kind' contributions of pieces of the machine. Magnets, instruments and reactor sections will arrive from around the world to be cobbled together at the central site in St-Paul-lès-Durance in southern France. Because no one body holds the purse strings, designs for the machine's components face a tortuous back-and-forth between the central ITER Organization and national 'domestic agencies', which ensure that local companies secure contracts for ITER's components.

Nowhere is the problem more pronounced than the tokamak, the central structure that will eventually house ITER. The construction of the building is meant to be contracted out by Fusion for Energy (F4E), Europe's domestic agency. But the ITER Organization could not tell the agency what needed to be built, says Rem Haange, ITER's technical director, until it received data from the other domestic agencies on the numerous systems and subsystems that the building must house. That process was seriously behind schedule when Haange arrived in 2011, he says. "Not a single piece of data had been given by the domestic agencies."

Haange says, however, that the project remains firmly on schedule, and he is racing to make up for lost time. A task force of engineers is working through the tokamak building design floor-by-floor to finalize it. "We have a deadline for every floor level, and we are just about making it," he says. The final design will be finished in March next year, but to keep the project on schedule, F4E must tender the construction contract by the end of this year.

F4E is also encountering trouble on another key contract, for the giant poloidal field coils that will wrap around the girth of the machine. The coils are among the largest in ITER, and the bottommost ones must be completed before the machine can be assembled. The ITER Organization authorized procurement of the coils in 2009, but F4E's tender received just a single, joint bid from the French firm Alstom and the German company Babcock Noell.

F4E rejected the bid because it came in far above the agency's cost expectations, according to multiple sources, who declined to be named because of the sensitivity of the bidding process. Isabelle Tourancheau, a spokeswoman for Alstom, said that the bid had failed after "long and difficult technical and commercial negotiations". Aris Apollonatos, a spokesperson for F4E, says that the contract will now be broken into seven parts to make it more attractive to competitors and put it back out to tender. A meeting earlier this month garnered interest from 27 companies, he says.

Despite the tight schedule, both Haange and Apollonatos say that they will not ask for more time at next month's ITER council meeting in Cadarache, France. "We remain committed to delivering on all fronts and in line with the ITER schedule," Apollonatos says. Haange says that Osamu Motojima, director-general of the ITER Organization, is already looking at "simplified assembly", a further stripping-down of the already bare-bones first version of the machine, to keep the project on track. "We will ask for more time only if it is absolutely necessary," Haange says.

But holding onto the date for start-up may delay the first power-producing experiments, now scheduled for late 2027 or early 2028. Those experiments require a radioactive isotope of hydrogen called tritium to be produced on site. The necessary tritium plant may have to be delayed to keep to the current budget and schedule, Haange says. That delay may be politically unacceptable,  he says. "We will have to find ways of recovering potential time delays."