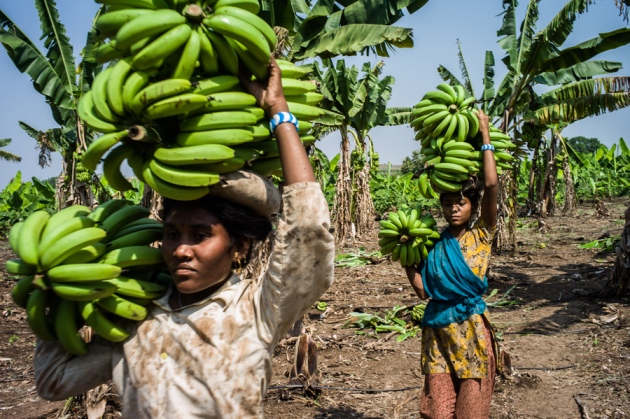 Banana plantations are at risk from a disease known as Fusarium wilt.

A variant of a fungus that rots and kills the main variety of export banana has been found in plantations in Mozambique and Jordan, raising fears that it could spread to major producers and decimate supplies. The pathogen, which was until now limited to parts of Asia and a region of Australia, has a particularly devastating effect on the popular Cavendish cultivar, which accounts for almost all of the multibillion-dollar banana export trade. Expansion of the disease worldwide could be disastrous, say researchers.

The disease is caused by strains of a soil fungus called Fusarium oxysporum f. sp.cubense (Foc). A strain of Foc previously wiped out the Gros Michel cultivar, which was the main exported banana variety from the nineteenth century until the 1950s. In response, the industry replaced Gros Michel plants with the Cavendish variety, which is resistant to that Foc strain. But Cavendish is susceptible to the new Foc Tropical Race 4 (Foc-TR4) strain, and could meet the same fate as Gros Michel if the fungus reaches Latin America, the world’s leading banana exporter, says Rony Swennen of the Catholic University of Leuven in Belgium, and a banana breeder at the International Institute of Tropical Agriculture in Dar es Salaam. “It’s a gigantic problem,” he adds. Although Foc strains spread slowly, they are almost impossible to eliminate from soil.

Foc-TR4 was first detected in Asia in the 1990s, and is now found in Taiwan, Indonesia, Malaysia, the Philippines, China and northern Australia (see ‘Fruit threat’). The outbreak in Jordan, reported on 29 October (F. A. Garcia et al. Plant Dis. http://doi.org/qd3; 2013), was the first to be described outside those nations. The Mozambique outbreak was reported last month.

Nobody is sure how the fungus arrived in Jordan or Mozambique. Migrant workers from Asia might inadvertently have brought contaminated soil with them. Another possibility is the import of infected rhizomes — the stems from which banana plants propagate. But much of the Cavendish industry now uses tissue culture, which produces pathogen-free plantlets. 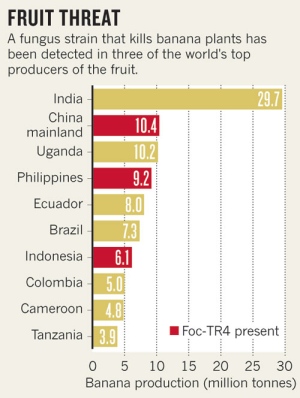 To slow the spread, good farm hygiene, and prompt quarantine and destruction of infected plants are crucial. Altus Viljoen, a researcher at Stellenbosch University in South Africa, was called in to identify the cause of the Mozambique outbreak, and says that authorities were quick to take action. He estimates that the disease has been present for two to three years.

Gert Kema, a Fusarium researcher at Wageningen University and Research Centre in the Netherlands and co-author of the Jordan report, believes that further spread is inevitable. “I’m incredibly concerned,” he says. “I will not be surprised if it pops up in Latin America in the near future.” That region, along with the Caribbean, accounts for more than 80% of banana exports. If Foc-TR4 takes root there, it could lead to the slow demise of industrial farming of the Cavendish variety.

Smaller farms in Asia are already trying to mitigate losses. Tissue culture of Cavendish plants has generated variants with random mutations that confer partial resistance to Foc-TR4. Planting of these variants, in combination with measures such as crop rotation, has allowed the cultivation of bananas on contaminated land. But production losses and higher costs make affected plantations less economically viable.

Progress in creating bananas fully resistant to Foc-TR4, either by classical breeding or genetic engineering, has so far been limited. The wild Asian banana Musa acuminata malaccensis— the genome of which was published last year (A. D’Hont Nature 488, 213–217; 2012) — seems to be resistant, and researchers are experimenting with putting its resistance genes into the Cavendish. The resulting transgenic specimens have been in field trials for 18 months on contaminated ground in Australia, and are looking “very promising”, says James Dale, director of the Centre for Tropical Crops and Biocommodities at Queensland University of Technology in Brisbane, Australia. But he cautions that the full results are not yet in.

For those who buy their bananas in supermarkets, the Cavendish may well be the only variety they know. But exports of the cultivar account for only about 13% of the 150 million or so tonnes of bananas and cooking bananas (plantains) produced annually. Industrial farms growing a single Cavendish cultivar are at a high risk of Foc-TR4 infestation, but the fungus poses less of a threat to the bulk of the bananas that provide a staple for some 400 million people worldwide.

Most of the bananas important for the food supply are grown by smallholder farmers in low-income countries and consumed locally. Hundreds of cultivars are farmed, and this biodiversity is an important rampart against disease. Researchers do not yet have a full picture of the susceptibility of these varieties, but many cultivars are likely to be resistant to Foc-TR4 because they are biologically different to the Cavendish.

For his part, Dale is trying to engineer Gros Michel bananas for resistance to the original Foc strain. The Cavendish is bland by comparison and it bruises more easily. Dale would like to see Gros Michel on supermarket shelves again. “It’s such a superior banana to Cavendish. To bring it back would be wonderful.”