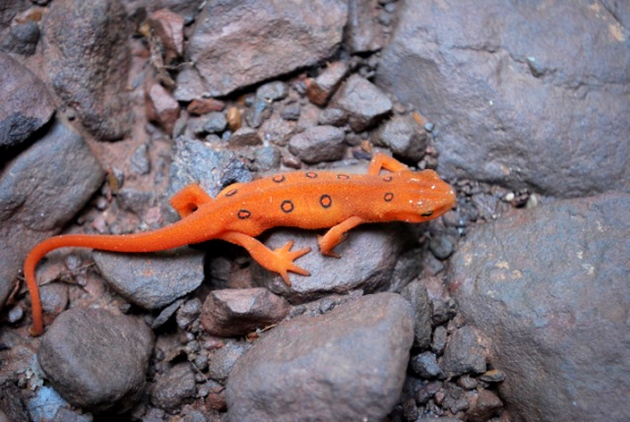 The North American eastern newt (Nothophthalmus viridescens) could be at risk from an imported fungus.

In 2010, a fungus started killing massive numbers of fire salamanders in the Netherlands. Biologists have now discovered that the disease comes from Asia — and that for salamanders elsewhere, it is likely a death sentence.

When the Dutch fire salamanders (Salamandra salamandra) started dying out, conservationists collected all the healthy-looking ones they could find in the wild. They gathered about 39 animals, and began keeping them in captivity — but those salamanders started dying, too.

Tests for one suspected cause, ranavirus, came back negative. So did tests for a fungus called Batrachochytrium dendrobatidis (Bd), which has been devastating amphibian populations around the world, driving some to extinction.

But when An Martel, a veterinary surgeon at Ghent University in Belgium, and her team examined the animals with a microscope, they saw telltale strands of fungus woven into the salamanders' skin. It turned out to be a new killer fungus, a cousin of Bd that the team named Batrachochytrium salamandrivorans1. Now, the researchers report in Science2 that salamander or newt species in Europe and North America are vulnerable to it.

“First we were very happy because it is very exciting to detect a novel species of fungus,” says Martel. “But then it was scary.”

By 2013, only 4% of the Dutch fire salamander population was still alive. And there are no natural barriers to prevent the Dutch outbreak and two new outbreaks Belgium from spreading to the rest of Europe.

Next, the researchers tested more than 5,000 individual amphibians from around the world for traces of the fungus. They found B. salamandrivorans in animals from Thailand, Vietnam and Japan — but these amphibians did not seem to be ill, suggesting that they have evolved some defences. It is likely that the outbreaks in Europe began with imported Asian salamanders.

The team did not detect the fungus in any North American samples. But Jodi Rowley, an amphibian biologist at the Australian Museum Research Institute in Sydney, says that does not mean the fungus is not a threat to those species. “I would be very surprised if it wasn’t already in America, at least within the pet trade, given the volume of trade of pet salamanders,” she says. “There needs to be increased testing of amphibians as they come in through the borders.”

Lobbying for this testing is a passion of Karen Lips, a conservation biologist at the University of Maryland in College Park who has studied Bd since 1997, and is a co-author of the latest study. “Here in the US, we have no way to require any testing or surveillance of wildlife imports that may be bringing pathogens and parasites,” she says, adding that three bills currently in Congress would call for increased surveillance — but that they are “just sitting there” without any action to turn them into law.

“We can take all the things we learned from Bd and do a much better job,” says Lips. But her hopes are tempered by experience. She has seen Bd drive dozens of frog species to extinction in the Americas.

“There is a voice in the back of my head that says don’t get your hopes up so high,” she says. “How good are we at keeping things out, even little microbes? We couldn’t even keep out Ebola.”