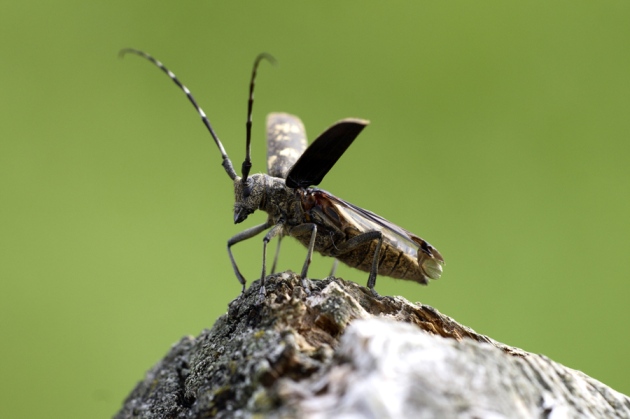 Pine-sawyer beetles serve as transportation for pine-wood nematodes, which have devastated forests in China.

The pine-wood nematode is a major pest in the forests of China. The worm, which causes pine-wilt disease, has killed more than 50 million trees and resulted in economic losses of US$22 billion since 1982.

But now, after a study lasting almost a decade, a team of Chinese ecologists has made a discovery that could halt the march of the nematode (Bursaphelenchus xylophilus). Sun Jianghua and his colleagues at the Chinese Academy of Sciences’ Institute of Zoology in Beijing have identified a fungus that has a crucial role in the worm’s life cycle, opening the way for potential control strategies.

“This is an important study that points to a new way of preventing this deadly disease,” says Manuel Mota, a plant pathologist at the University of Évora in Portugal, who was not part of the latest study.

In Asia, pine-wood nematodes spread with the help of Japanese pine sawyer beetles (in the Monochamus genus). The worms enter the respiratory system of hatching beetle pupae in the trunks of diseased trees and then ‘hitchhike’ in the beetles when they move to healthy trees.

As the young beetles feed, the nematodes leave through the insects' mouths. Once infected, trees often die within a year — and their hollow trunks provide an ideal place for mature beetles to mate and lay eggs in.

The pests seem to prefer certain pine forests over others, but the reason has not been clear. “While the nematodes have invaded China for more than three decades, pine forests are not equally affected,” says Sun. “A burning question is what makes an alien species invasive in some habitats but not the others.”

Sun thinks that he now has the answer, at least as far as the pine-wood nematode is concerned. In an eight-year survey, at six sites in southern China, Sun and his colleagues found that tree infestation was higher in the presence of a previously unknown species of tree fungus, Sporothrix sp. 1. The results are published this month in Ecology1.

“Although we knew that pine-wood nematodes feed on not only the vascular tissue of pines but also tree fungi, little is known about what the fungi do to either partner in this symbiotic relationship,” says Sun.

To examine the fungi’s role in the relationship, the team fed nematodes and beetles with different types of fungus in a Petri dish. The nematodes feeding on Sporothrix sp. 1 mated more, had more offspring and developed faster than those feeding on other species of fungi. “The fungus also allowed the beetles to survive better and grow faster,” says Sun.

The researchers found that Sporothrix sp. 1 also increased the trees' production of diacetone alcohol, which increases growth and reproduction in the beetles and nematodes.

The key now, says Mota, is to identify all fungal species that are involved in facilitating pine-wilt disease. “It’s unlikely that one single species is to blame,” he says.

The problem is not limited to China, adds Mota. The nematode, which is native in North America, also wreaks havoc in other Asian countries, such as Japan and Korea. Since its first detection in Portugal in 1999, the pest has spread into Spain and threatens forestry in other European countries2. “It’s a big concern,” Mota says. “Effective ways to stop its spread are badly needed.”

In an earlier study, Sun and his team found that a chemical compound produced by beetle pupae, called fatty acid ethyl ester, induces juvenile nematodes into a ‘dispersal stage’ — a prerequisite for the hitchhiking step3.

Blocking the growth and reproduction of the nematode as well as its dispersal are now “two potentially promising strategies to prevent the nematodes from infecting trees”, Sun says.