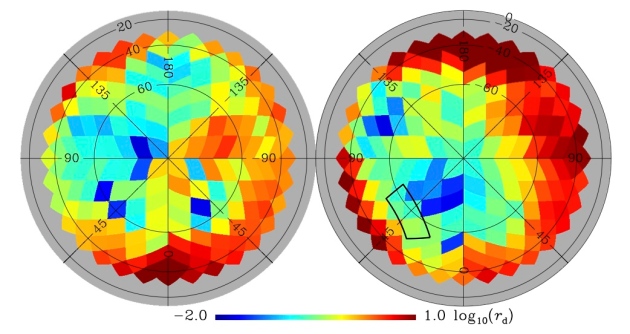 Planck's full-sky map grades regions of lower (blue) and higher (red) interstellar dust — and shows that the patch observed by the BICEP2 telescope (rectangle) was not among the least dusty. The left panel shows the northern Galactic hemisphere and the right panel shows the southern one.

A map of interstellar dust unveiled today1 has substantially lowered the chances that a South Pole telescope glimpsed the imprint of gravitational waves from the dawn of time, as was claimed in March. The latest map, obtained with the European Space Agency's Planck space observatory, could, however, guide astronomers to the regions where they might have the best chance of detecting such a primordial signal.

In March, a team of astronomers using the BICEP2 radio telescope at the South Pole announced that they had detected a tiny twist in the polarization of light from the cosmic microwave background (CMB), the radiation left over from the Big Bang (see 'Telescope captures view of gravitational waves'). The twist, the researchers said, was probably due to gravitational waves, undulations in the fabric of space-time created during the earliest moments of the Universe. The announcement thrilled cosmologists because the waves would have constituted long-awaited proof that the infant Universe underwent a period of hyper-accelerated expansion known as inflation.

BICEP2 team leader John Kovac of the Harvard-Smithsonian Center for Astrophysics in Cambridge, Massachusetts, and his colleagues acknowledged that ordinary dust in the Milky Way, which can polarize light in the same way that gravitational waves can, could have contaminated their results. But the researchers believed that in the tiny patch of sky through which their telescope peered, dust levels were low enough to let a strong primordial signal emerge.

Almost from the get-go, however, other astronomers asserted that the BICEP2 team had underestimated the role of dust and had incorrectly extrapolated information from preliminary dust maps of the sky compiled from data recorded by Planck2, 3.

A map that the Planck team released in May had omitted the region because the polarization signal there was too faint to accurately assess at that stage (see 'Milky Way map skirts question of gravitational waves'). Now, after two years of analysis that began well before the BICEP2 researchers made their announcement, the Planck team has released a long-awaited map showing the polarization owing to dust over the entire sky, including the region examined by BICEP2.

The map, described in a paper posted on the arXiv preprint server today1, shows that dust polarization is significantly higher in the region around the South Pole than was estimated by the BICEP2 team — and that its effect cannot be ignored in any place in the sky, says Planck scientist Charles Lawrence of NASA’s Jet Propulsion Laboratory (JPL) in Pasadena, California.

“The level of dust in the BICEP2 region is clearly significant, and also higher than pre-Planck estimates,” says Jamie Bock, a BICEP2 team member at JPL and the California Institute of Technology in Pasadena. The Planck map shows that “most of what BICEP2 saw was due to dust”, says David Spergel, a theoretical astrophysicist at Princeton University in New Jersey, who is not part of the Planck collaboration and has been a vocal critic of the BICEP2 team’s analysis.

Spergel notes that some small residual signal from BICEP2, left over after subtracting for the polarization owing to dust, might still be a result of primordial gravitational waves. “But it’s going to be hard to tease that out,” says Spergel, even when data from both Planck and BICEP2 are combined in a joint analysis now being conducted by the two teams. That analysis is expected to be released in late November, says Lawrence.

“It’s most likely that any claim … that a residual signal is due to gravitational waves will be much less significant,” says Planck researcher François Bouchet of the Paris Institute of Astrophysics.

Still, Bock asserts that the upcoming analysis will clarify exactly how much of the signal measured by BICEP2, which remains the most precise measurement of the CMB polarization, is owing to dust. The paper posted on arXiv today extrapolates the polarization signal recorded by Planck at a radio frequency of 353 gigahertz (GHz) to the signal BICEP2 detected at 150 GHz. This, he says, “does not really give the answer to this question, because the analysis is not a one-to-one comparison to the signal reported by BICEP2”.

For instance, Bock notes, the analysis does not account for the ways in which the BICEP2 team filtered the data to measure polarization, an important detail that will be accounted for in the joint paper. The Planck and BICEP2 teams began collaborating only in July.

In the meantime, the latest Planck dust map stands as a gold standard for any experiment that is searching the CMB for signs of primordial gravitational waves, says Lawrence. The map shows that “you cannot ignore dust” in any place in the sky, and provides a prescription of how to subtract the confounding effect of dust contamination, he notes.

Bouchet calls the chart a “treasure map”, revealing which regions of the sky have the smallest amount of dust polarization and where future experiments might have the best chance of striking “gold” — a sign of gravitational waves from the early Universe. The south polar region examined by BICEP2 is not one of these low dust regions, the map shows, and CMB experiments now being designed would probably not focus on that region, Bouchet says.

Spergel says the Planck map seems to be precise enough that polarization data from the Planck spacecraft now has “the best shot” of finding gravitational waves from the early Universe, should they exist. The Planck team’s highly anticipated analysis of all their data, peeling away the confounding effect of foreground dust, is also expected to be unveiled in late November.