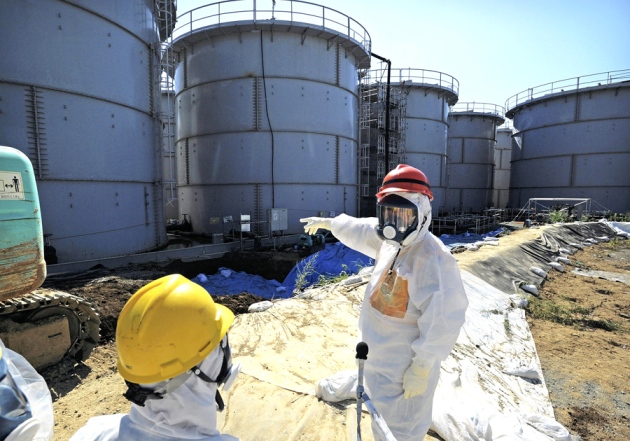 Tanks of water used to cool reactor 4 at the Japanese nuclear power plant have released hundreds of tonnes of heavily contaminated water into the environment.

Pressure continued to mount on the owner of Japan’s crippled Fukushima Daiichi nuclear plant on 1 September after it admitted that recent leaks of contaminated cooling water contained 18 times the levels of radiation previously reported.

The Tokyo Electric Power Company (TEPCO) said that one hot spot was found to be giving off 1,800 millisieverts per hour — much more than the 100mSv initially quoted and enough gamma radiation to kill a human within four hours. It also emerged that the pipe from which the water was leaking had been sealed with plastic tape.

The company vowed to launch an investigation of the leak and “take any appropriate countermeasures immediately”, adding that only 1mSv of the radiation was made up of gamma rays, with the rest being less penetrating beta radiation.

But the new revelations will heap pressure on the Japanese government to intervene in the clean-up of Fukushima after experts voiced fears that TEPCO is unable to cope with the operation, which has seen hundreds of tonnes of radioactive water escape into the Pacific Ocean. Analysts warned that if the government fails to act, prime minister Shinzo Abe’s pro-nuclear stance may be jeopardized.

“It’s clear that TEPCO is unable to solve the problems on its own,” said Tsutomu Toichi, managing director and chief economist at the Institute of Energy Economics in Tokyo. “The government has to step in to ensure these problems are solved quickly. It is going to have to provide funds, as well as a plan for moving forward, and explain this to the public in a way that is easy to understand.”

Wiktor Frid, a nuclear expert with the Swedish Radiation Safety Authority in Stockholm, added, “That water leaked from a tank unnoticed for several days is alarming and extremely embarrassing for TEPCO”.

The leaks have also led to renewed concerns over ocean contamination and food safety, with local fishing cooperatives suspending trial catches and one oceanographer saying that further leaks would have “severe” consequences for marine life.

The leak of some 300 tonnes of partially treated water that had been used to cool melted nuclear rods from the destroyed reactors was reported by TEPCO on 19 August. The radioactivity of the water stands at about 80 megabecquerels per litre, about 1% of what it was before treatment by an on-site purification system. Japan’s Nuclear Regulation Authority initially labelled the incident a level 1 event (known as an ‘anomaly’) on the International Nuclear Event Scale, but on 28 August upgraded it to level 3 (‘serious incident’), citing the large amount of contaminated water leaked and the fact that a safety buffer was not available for the water tank in question.

At present, TEPCO is storing more than 300,000 tonnes of radioactive water on the site of the destroyed Fukushima Daiichi plant. Radioactive caesium isotopes are being removed from the water by an advanced liquid-processing system built after the accident, but a facility for removing strontium isotopes is not yet ready. Tritium, another harmful radionuclide, cannot be safely removed by any known purification system because it is incorporated within water molecules.

The leaked water is thought to have seeped into the ground and will eventually reach the sea adjacent to the plant. The storage site near Fukushima’s reactor 4, where the leak was discovered, lies some 50 metres above sea level and is just a few hundred metres from the coast.

Measures proposed so far to prevent the polluted water from flowing into the sea — such as freezing or excavating the soil surrounding the storage site — seem to be either very expensive or technically unfeasible, says Joachim Knebel, a nuclear expert and chief science officer at the Karlsruhe Institute of Technology in Germany.

“We can’t really assess the situation from far away,” he says. “But it appears to me that none of the proposed measures would work. TEPCO would be well advised to seek international expertise in coping with the problems.”

Several countries, including Russia, have offered to assist with the company’s clean-up efforts, and TEPCO said last week that it will consider accepting outside help. On Monday, it also announced a series of measures, including the installation of a new central control system, to mitigate the risk of future leaks.

“Some tanks have automatic monitoring equipment and some don’t,” says Yo Koshimizu, a TEPCO spokesman. “We are currently determining whether to add such equipment to all of the tanks.”

Some 400 tonnes of cooling water are being collected in tanks each day. The growing fleet of storage tanks — which currently stands at about 1,000 — is a source of alarm for experts, who fear that huge amounts of contaminated water will eventually have to be dumped into the ocean. Worse still, some 300 tonnes of groundwater highly contaminated with caesium-137, which has a 30-year half-life, are thought to be flowing from beneath the destroyed reactors into the sea every day.

The potential for harm is huge, says Jota Kanda, an oceanographer at the Tokyo University of Marine Science and Technology who monitors radionuclide distribution in sediments and biota off Fukushima1.

“The effects of one relatively small leak may be insignificant,” he says. “But there are huge amounts of radionuclides in these tanks and the water may have to be stored for a long time to come. If more leaks were to occur the consequences might be severe.”

The Fukushima nuclear accident resulted in the largest ever accidental release of radioactivity to the oceans. Some 80% of all the radionuclides released from Fukushima ended up in the Pacific2. In some local fish, high residual levels of radioactivity were measured two years after the accident. Commercial fishing in the area is still banned.

But it is unclear how much residual radioactive contamination is still entering the sea from leaks around the Fukushima plant, says Scott Fowler, a marine ecologist at Stony Brook University in New York who has been involved in previous assessments of contamination levels in the ocean near Fukushima.

To track changes in coastal waters and predict when seafood species in the region may be safe to consume, it will be necessary to establish a ‘temporal data set’ — that is, to measure the levels and distributions of contaminant radionuclides at a given location over time, he says.

“Even if one assumes that leaks from the plant into the sea will eventually be stopped, residual contamination would continue to be present in the adjacent marine ecosystem for many years,” he says. “So the contamination of long-lived radionuclides in different organisms in the local marine food webs needs to be monitored continually.”

The story was updated to reflect latest developments.