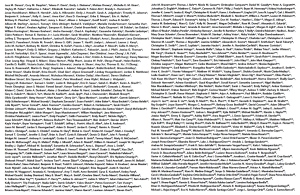 These authors were among 1,000 who were involved in a fruit-fly genomics paper.

Author lists have grown lengthy in many fields of science, but when a Drosophila genomics paper1 was published with more than 1,000 authors, it sparked discussion online about the meaning of authorship. The paper, published in the journal Genes Genomes Genetics, names 1,014 authors — with more than 900 undergraduate students among them. Zen Faulkes, an invertebrate neuroethologist at the University of Texas-Pan American in Edinburg, questions on his blog whether every person made enough of a contribution to be credited as an author. But the paper’s senior author, geneticist Sarah Elgin at Washington University in St. Louis, Missouri, says that large collaborations with correspondingly large author lists have become a fact of life in genomics research. “Putting together the efforts of many people allows you to do good projects,” she says.

Quadruple-digit author lists are not unusual in fields such as particle physics, but are rare in biology. The G3 paper focused on the sequencing of a particular segment of the Drosophila genome known as the Muller F element. The students are members of the Genomics Education Partnership, a collaboration of largely US institutes, and they manually corrected errors in draft sequences and annotated this stretch of the genome from four species of Drosophila. The results suggest that key sections of the Muller F element, also known as the dot chromosome, have been conserved in Drosophila species during 40 million years of evolution.

Andreas Prokop, a geneticist and Drosophila researcher at the University of Manchester, UK, who was not one of the authors, showed support for the project in his tweet:

Others were shocked. William Alexander, a synthetic biologist at the University of Wisconsin–Madison, tweeted:

Faulkes wrote on his Neurodojo blog that “papers like this render the concept of ‘authorship’ of a scientific paper meaningless”. He suggests that the students could have been called contributors instead, and that their names could have been included in a supplementary file.

In an interview, Faulkes says that he suspects the students would not qualify as authors using the definition set by the International Committee of Medical Journal Editors. Among other things, those guidelines call for authors to be responsible for “drafting the work or revising it critically for important intellectual content”.

Elgin says that all of the students read, critiqued and approved the manuscript, but did not write or revise it. Correcting and annotating the sequence required extensive data analysis, she says, and each student made a “significant intellectual contribution” to the project and earned his or her place in the author list.

In a post on Genes to Genomes — the blog of the Genetics Society of America, which publishes G3 — Elgin is quoted as saying, “One of our big goals was to publish a paper with the students as co-authors. We wanted them to be able to look themselves up on PubMed!”

Adam Fagen, executive director of the Genetics Society of America, who is familiar with the paper, says that it took a large team to tackle the immense volume of research data. He adds that key researchers appear at the beginning and end of the author list, and the others are listed alphabetically by institution. First author Wilson Leung, a geneticist at Washington University, led the statistical analysis of the final data.

The online discussion highlighted how the definition of an author can vary between scientific disciplines, depending on the type of research involved: huge genetics projects such as ENCODE can include hundreds of collaborators, for instance. Faulkes, who studies crustacean biology, says that it is rare for papers in his field to have ten or more authors. But as he notes on his blog, a landmark 2012 paper on the Higgs boson in Physics Letters B listed 2,932 authors — all members of the ATLAS Collaboration at the Large Hadron Collider at CERN near Geneva, Switzerland. Gordon Watts, a particle physicist at the University of Washington in Seattle and one of the many authors on that Higgs paper, says: “We have a long tradition of long author lists, and we all know how to interpret them.” He adds: “In particle physics, the experiments are very large, and people work on many different tasks.”

In his blog post, Faulkes suggests a new rule: “If the number of authors on your paper can be measured in ‘kiloauthors’, having your name on the paper will not count for tenure and promotion purposes.”