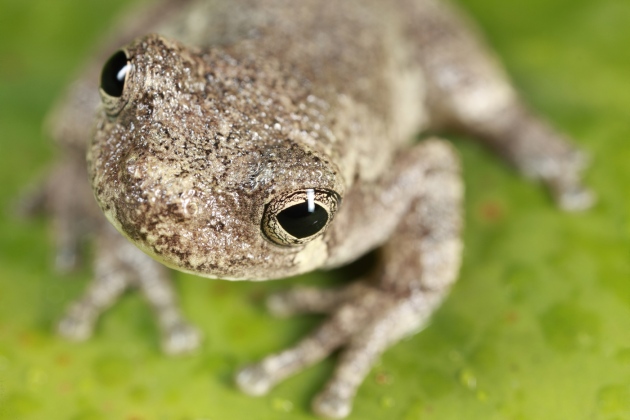 The grey tree frog (Hyla versicolor) can develop resistance to the pesticide carbaryl.

Several species of frogs can quickly switch on genetic resistance to a group of commonly used pesticides. In one case, wood frogs (Lithobates sylvaticus) were able to deploy such defences in just one generation after exposure to contaminated environments, scientists reported last week at a conference of the Ecological Society of America in Baltimore, Maryland.

This is the first-known example of a vertebrate species developing pesticide resistance through a process called phenotypic plasticity, in which the expression of some genes changes in response to environmental pressure1. It does not involve changes to the genes themselves, which often take many generations to evolve.

The frogs' speedy response raises hope for amphibian species, of which one-third are threatened or extinct, says Rick Relyea, an ecologist at the Rensselaer Polytechnic Institute in Troy, New York, and the team's leader.

“Frogs can evolve much faster than we thought,” says Andrew Blaustein, an amphibian ecologist at Oregon State University in Corvallis. “It is possible these stunning findings could have some practical value for conservation but the situation is complex. There is a cocktail of problems.”

In 2013, Relyea and his team discovered2 that L. sylvaticus frogs living near agricultural land in northwest Pennsylvania were resistant to the pesticide carbaryl. Laboratory tests revealed that frog embryos and hatchlings living far from farmers' fields were not pesticide-resistant but could quickly become tolerant when exposed to low levels of the pesticide.

“If inducible tolerance occurs more widely in nature, it would alter our perspective on how pesticides affect organisms,” says Relyea.

Some of the team’s latest published research shows that L. sylvaticus individuals living close to contaminated farmland evolve to permanently express the resistance after natural selection favours the “switched-on” phenotype, in a process known as genetic assimilation. In contrast, populations inhabiting pesticide-free land show their tolerance only after exposure to low levels of the chemicals.

Scientists have observed only a few other species evolving as a result of phenotypic plasticity, such as plants shifting to live at higher altitudes in response to climate change.

Relyea suggests that agricultural pests such as mites and beetles — the intended targets of pesticides — could also develop resistance in the same way. Understanding how tolerance evolves could help farmers to prevent pests from developing resistance. Farmers might not apply an initial round of pesticide at low doses if they knew it could help pests to become resistant, he adds.