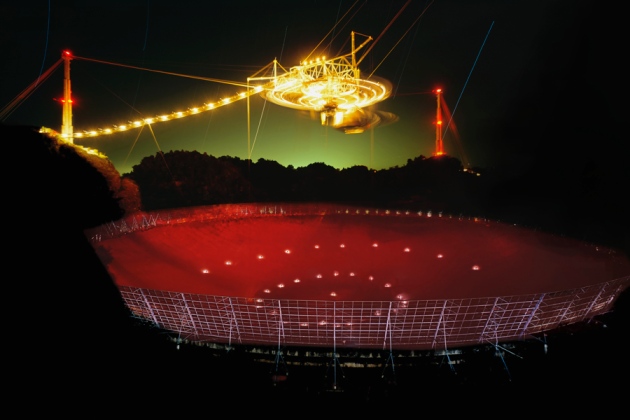 The Arecibo Observatory in Puerto Rico, which has spotted the first example of a repeating fast radio burst.

Last week, astronomers said that they had1 identified the origins of an FRB for the first time — pinpointing the signal to a distant galaxy. And a paper published today3 offers a different clue to the origins of FRBs, which have baffled astronomers since they were first observed nine years ago. It reports the discovery of a repeating signal: a surprise because all 17 known bursts so far have been one-off blips.

But sceptics have questioned the first work, recording telescope observations within days of the announcement that cast doubt on the finding2.

On 24 February, astronomers announced that they had identified the origin of an FRB in a galaxy 1.9 billion parsecs (6 billion light years) away, probably produced by a collision between two neutron stars1. A network of telescopes had scanned the area of sky in which an FRB had been picked up by the Parkes radio telescope in New South Wales, Australia, and had discovered a fading afterglow of radio waves in an elliptical galaxy. The odds of finding such a radio signal by chance were just one or two in a thousand, wrote the team led by Evan Keane of the Square Kilometre Array Organisation, which is headquartered at the Jodrell Bank Observatory outside Manchester, UK.

But two days later, astronomers Edo Berger and Peter Williams argued in a paper posted on the preprint server arXiv2 that the afterglow could, in theory, have come from a periodic radio-wave flare-up at the galaxy’s core, where matter spirals into a supermassive black hole. The duo, of the Harvard–Smithsonian Center for Astrophysics in Cambridge, Massachusetts, already had plans to test their hypothesis: they had submitted a proposal on the morning of Thursday 25 February to use the telescopes of the Very Large Array in New Mexico. They received approval the same night and their data arrived over the weekend.

By the evening of Sunday 28 February, they reported on the Astronomer’s Telegram — an online bulletin service — that they had re-measured radio signals from the elliptical galaxy’s core. They found the signals had become brighter than the levels seen in Keane's last set of observations, which implies that the galaxy has flared up again and is indeed naturally variable.

“I think that puts the paper overall on pretty weak grounds,” says Kiyoshi Masui of the University of British Columbia in Vancouver, Canada, who was not involved in either study. He gives Keane’s result a “significantly worse” than 50% chance of holding up.

Williams estimates the odds that a galaxy producing its own radio-wave flare-ups could appear in that area of sky at roughly 10%, not the one in a thousand quoted by Keane’s team. “I don’t know why the referees didn’t make them do more work to reject the hypothesis,” he says. On Twitter, he added that he was “disappointed” with the referees, and that “something has failed badly when it takes a half-day of work to raise serious questions about a result launched with fanfare”.

Leslie Sage, a physical sciences editor for Nature, says that the journal cannot comment on the peer-review process for the paper. (Nature’s news team is editorially independent of its research team.) Keane says that he and his colleagues are considering the latest analysis and are continuing their own studies. They will report their findings in the peer-reviewed scientific literature, “which is where scientific debate happens”, Keane says. “We really can’t rush the scientific process,” he adds.

In a separate paper published today in Nature3, astronomers report that an FRB first found in 2013 by combing the data archive of Arecibo Observatory in Puerto Rico was spotted again on follow-up observations with the ultra-sensitive radio dish in May and June 2015. The signal was seen ten times last year, with some bursts less than a minute apart.

These encore appearances came as a surprise — and will change how researchers think about the bursts’ origins, says astronomer Laura Spitler of the Max Planck Institute for Radio Astronomy in Bonn, Germany, the first author of the study. An FRB that repeats cannot be caused by a single cataclysmic collision between objects such as neutron stars, for example.

Also striking is that some of the pulses are stronger at higher radio frequencies than at lower ones — the opposite of most astronomical radio signals.

Spitler thinks this means that the FRB comes from a neutron star with a strong magnetic field. Some researchers have proposed that a class of such objects called magnetars could be responsible for the bursts4. But Spitler favours a different strongly magnetic species: a type of pulsar that spins more rapidly than magnetars but is capable of intermittent giant pulses of radiation. The most famous example is the Crab Pulsar.

Taken with Keane’s finding, Spitler’s results would suggest that FRBs have at least two possible sources, notes Masui. “But now I’d argue that since there’s a lot of doubt cast on last week’s result, there’s no evidence that there are two classes,” he says. If FRBs are the result of giant pulses, they might not be from the distant cosmos at all — they would only be strong enough to be detected from galaxies in the neighbourhood of the Milky Way. That would be a disappointment to cosmologists, who hoped that Keane’s study meant that FRBs could be used as beacons to map the broad structure of the Universe, because the radio pulses would be shaped by the matter they pass through.

The fog of confusion may soon lift. Three telescopes that will be able to detect several FRBs each day are set to begin operations or ramp up this year — meaning that astronomers could soon be “overwhelmed” by the signals, as astronomer Duncan Lorimer of West Virginia University in Morgantown told Nature last week.