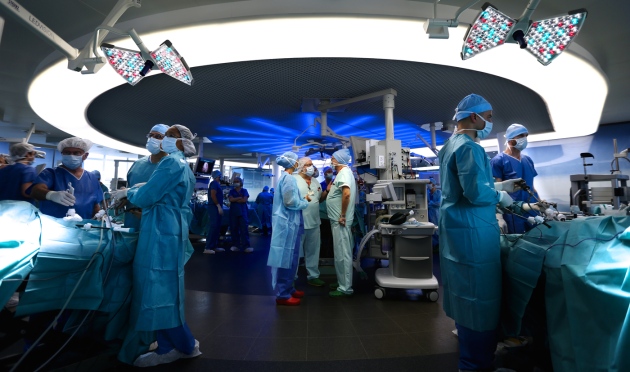 The Research Institute Against Digestive Cancer is part of a university–hospital research cluster (IHU) in Strasbourg, France.

A group of French scientists is due to meet government officials on 27 October in a bid to resolve a row that has left many of the country’s leading biomedical researchers furious.

Scientists were shocked earlier this month when the government unexpectedly postponed a call for applications to create a new crop of medical-research clusters just days before the closing date, and said that it would slash the budget earmarked for the project.

Government ministers said that they were delaying the project because they wanted to change the way these autonomous clusters are governed. But scientists contacted by Nature say they suspect that behind the decision is an effort by INSERM, France’s biomedical-research agency, to exert control over the institutes.

The idea of creating the clusters, known as Instituts Hospitalo-Universitaires (IHUs), was introduced in 2009 to boost translational medical research, bringing together universities, teaching hospitals, research agencies and industry.

Based on public–private partnerships, they enjoy much autonomy and are mostly free from government and research-agency bureaucracy. The first six IHUs — in Paris, Bordeaux, Marseilles and Strasbourg — were approved in 2010 and received total funding of €850 million (US$1 billion). The clusters have been widely hailed as a successful model, and a second call for applications — open to any group of institutions that wanted to apply — was due to close on 12 October.

But in a press release on 2 October, the government announced that the deadline for the call would be postponed to an unspecified date. It also said that only two new IHUs would be funded, instead of the three initially planned, and that the total budget would be halved to €100 million. Nineteen applications had been made.

In letters sent to the government last week, and to President Emmanuel Macron on 23 October, 14 applicants said they were “appalled” or “bewildered” by the sudden and drastic changes to the funding and to the terms of the selection process. The health minister and higher-education ministers have invited applicants to discuss the issue this week.

“None of the changes were discussed with us,” says Richard Frackowiak, who was chair of the international panel that would have assessed the IHU applications, but who resigned from the post on 6 October in protest. “The IHUs are the biggest French medical-research success of the past 10 years.”

The delay “is incomprehensible”, says Jacques Marescaux, a surgeon and chairman of the IHU Institute of Image-Guided Surgery of Strasbourg. The clusters are admired worldwide for their flexibility in being able to raise funds rapidly, and to recruit well-paid, top-flight researchers, says Marescaux. “The model has already been copied in Taiwan and Brazil.”

Despite the clusters' autonomy, INSERM seems to have weighed in on the latest call. In a 9 September letter to the IHU applicants, seen by Nature, the agency recommends that the candidate clusters alter their proposed structures to a ‘contract’ or ‘consortium’ model. This would give the agency a direct say in IHU affairs. The ministers’ desire to change the governance models seems to directly reflect INSERM’s recommendations, which were not solicited, say applicants. INSERM did not respond to a request for comment from Nature’s news team.

The change of strategy suggests that INSERM wants to get its hands on all the clusters, says Didier Raoult, who heads the infectious-diseases IHU in Marseilles. The institutes largely — or, in some cases, completely — escape the control of the research agencies, he adds, as do the patents that come out of them. “To quarrel with leading French and other medical researchers is very bad news for France and its image in the scientific community.”

A joint report by two French inspectorate agencies — of social affairs, and of education and research — was completed before the latest call was opened, and said that the IHUs were “promising”. The institutes had filed 183 patents and spun out 28 start-up companies. Although the report called for improved IHU governance, including closer researcher involvement, “it said the autonomous foundations should be maintained and strengthened”, notes Philippe Froguel, who is leading an IHU application and is an endocrinology researcher at Lille University Hospital.

Froguel is concerned that at the upcoming meeting, applicants will simply be again told what has been already decided. But he hopes that it will provide an opportunity for negotiation and some clarity: “They will have to give us a new date for the tender and be more precise about the question of governance, which will be positive,” he says.

In a press release on 26 October, the French ministers for health and higher education, research and innovation announced that the deadline for the IHU application call would be 15 December 2017.