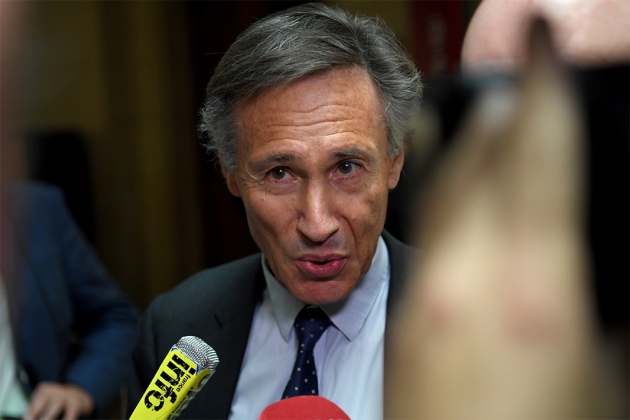 Pulmonologist Michel Aubier, speaking ahead of his court case in June 2017.

In an unprecedented court case in Paris, an eminent French lung specialist has been fined €50,000 (US$57,000) and given a six-month suspended prison sentence because he did not disclose his ties to the oil industry during a Senate air-pollution inquiry.

The case is the first time that the French Senate has pressed criminal charges over false testimony. “It is an extremely important decision,” the Senate’s lawyer, Emmanuel Marsigny, told reporters. “It underlines the importance of the Senate’s commissions of inquiry and the risk of false declarations.” French researchers say that it also serves as a sharp reminder of the importance of disclosing all possible conflicts of interest when presenting evidence.

Michel Aubier had testified to a Senate commission about the financial and economic costs of air pollution in April 2015. At the time, he was head of pneumonology and allergology at the Bichat-Claude Bernard Hospital in Paris — although he has since retired from that position — and was speaking on behalf of the public authority that runs Paris public hospitals (AP-HP).

Aubier told the Senate commission that he had no ties with economic actors. But French newspapers later revealed that for 20 years, Aubier had been paid by the French oil company Total as an occupational physician looking after executive staff, and for managing a team of physicians at the company. (According to the court ruling, he earned around €100,000 a year for that work from 2012–15.) He is also an unpaid board member of Total’s philanthropic foundation.

During the judicial inquiry, it emerged that Aubier had erred in other ways as well, by failing to seek clearance from his employers for five ad hoc work contracts that he had signed with pharmaceutical companies and declared in a health-ministry database.

Aubier told a court hearing in June that he never intended to mislead the Senate commission. “I made a mistake,” he said. “If I were to do it again, I would declare, but [the omission] was absolutely not intentional.”

But on 5 July, a Parisian judge found him guilty of false testimony. The €50,000 fine represents two and a half months of Aubier’s total annual earnings and pension income, the judgement says. Aubier’s lawyer, François Saint-Pierre, says that no decision has been reached on whether to appeal the verdict.

The case illustrates that researchers and physicians who are encouraged to work closely with industry need to understand what constitutes a conflict of interest, and to be aware of the need for transparency regarding outside links, says Hervé Chneiweiss, a neuroscientist who is chairman of the ethics committee of the French biomedical-research agency INSERM.

Aubier has long been accused of downplaying the impact of small particles in urban pollution on disease. During the 2015 inquiry, Aubier told the Senate that respiratory, bronchial and cardiovascular diseases, on which the AP-HP spends millions of euros each year, were most frequently linked to air pollution. But he said that the impact of pollution on lung cancer “is extremely low and a subject of much debate”.

In fact, the World Health Organization’s cancer-research agency, the IARC, has said since 2012 that diesel particles are carcinogenic; in 2013, it declared that outdoor air pollution in general was also carcinogenic.

In March 2016, six physicians pointed to the IARC decision in protest against comments Aubier made to a television interviewer that month. “I do not think, and most experts agree, that being exposed to ambient pollution in cities such as Paris predisposes to lung cancer, unless there is another factor such as smoking,” he said.

Still, Aubier stuck to his line during the court case, telling the judicial inquiry that scientific studies showed that air pollution’s effects on cancer were “modest and low”. “I have never minimized the impact of air pollution,” he added.

Alongside the criminal conviction, Aubier lost a civil lawsuit pressed by the Senate on the same charge. His employers AP-HP also launched a civil lawsuit against Aubier for tarnishing their image: they won, but Aubier was given only a symbolic €1 fine.

Two French non-governmental ecology organizations, Générations Futures and Ecologie sans Frontière, also launched civil lawsuits: François Lafforgue, a lawyer for the NGOs, argued that Aubier’s “false statement shows a clear conflict of interest and could have a negative impact on the evolution of French regulations on air pollution”. But in her 5 July ruling, judge Evelyne Sire-Marin noted that Aubier's comments did not directly infringe on laws on environmental protection, and so ruled the NGOs’ suit inadmissible.

The original version of this article mis-translated Michel Aubier's television comments about whether environmental pollution predisposes to lung cancer.