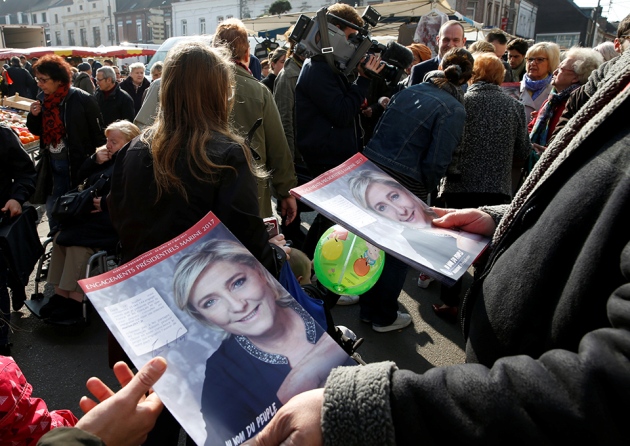 It is the strangest French presidential election that mathematician Cédric Villani can remember. “It has been like no other,” he says: “hectic, hysterical, and full of twists and turns”. With a few days left before Sunday’s first round of voting, any of four candidates could still reach next month’s second round, a head-to-head run-off between the leading pair. But with many voters undecided, and turnout hard to predict, much could still change.

For scientists in France, the presidential contest is often a chance to debate research and science-related issues. When Nicolas Sarkozy was elected a decade ago, for example, university reforms and environmental policy featured prominently in the campaigns. But this time, science has barely been mentioned — elbowed out by political scandals and the rise of Marine Le Pen’s far-right Front National party.

Le Pen has dominated much of the discussion about the election — to the dismay of those who oppose her nativist and nationalistic policies. Critics say that Le Pen, and the co-opting by mainstream parties of many of her themes, poses a serious threat to the pluralism and values of France’s liberal democracy. As a consequence, many researchers in France have told Nature that they are less concerned, in this election, about candidates’ stances on scientific issues than they are about broader political issues, and that their focus is stopping Le Pen and the spread of her ideas.

Le Pen has consistently led polls of first-round voting intentions, along with Emmanuel Macron, who heads En Marche!, a centrist movement that he created last year: each has around 22–23% of poll support. Jean-Luc Mélenchon, a far-left candidate of the party La France Insoumise, has surged in recent weeks to around 19–20% — catching up with François Fillon, the official candidate of the main centre-right party, Les Républicains. Trailing below 10% is Benoît Hamon, the official candidate of the main centre-left Parti Socialiste.

Since Le Pen took the helm of the Front National six years ago, she has professionalized and invigorated the party machinery, and tried to present a softer image, says Daniel Stockemer, a political scientist at the University of Ottawa. But the party founded by her father, Jean-Marie Le Pen, in the early 1970s remains extremist and illiberal, says Stockemer: “The core programme is the same; all that has changed is its communication strategy.” For all the political jitters, a Le Pen victory is “impossible”, Stockemer thinks. Le Pen’s core electorate still consists largely of people with extremist right-wing views, he says, which puts a ceiling on the number of voters she can attract in a head-to-head run-off. “The Front National is not the catch-all party that is needed to win a presidential election,” he says.

Villani, who directs the Henri Poincaré Institute in Paris, also highlights the threat that Le Pen poses to the European Union. She has promised to renegotiate France’s terms of membership with the EU, and to hold a referendum on the country’s place in the bloc and on leaving the euro currency. Last month, in response, Villani joined the campaign of Macron — the most pro-European candidate. Macron is also widely considered best placed to roundly defeat Le Pen in a head-to-head.

Le Pen has a vision of a society closed in upon itself, while researchers tend to have an international outlook, says Édouard Brézin, an emeritus theoretical physicist at the École Normale Supérieure in Paris and former president of the French National Centre for Scientific Research (CNRS). “Any French retreat from Europe would be far more significant than Brexit,” adds Brézin.

As well as holding numerous interviews, Nature e-mailed more than 3,500 scientists in France, requesting them to take part in an anonymous online survey. The results, from 173 researchers who had replied by 17 April, are far from a representative poll of scientists’ voting intentions, but reflect a trend among some French researchers to veer to the left of the political spectrum. They show Macron as the clear frontrunner, well ahead of Mélenchon and Hamon, and even further ahead of Fillon, with almost no support for Le Pen.

Asked expressly to comment on research policy priorities for France’s next president, survey respondents said they would like to see more funding for basic and long-term research; more science on topics directly relevant to citizens, such as agriculture and the environment; and a simplification of complex grant-application procedures. In fact, continuity is the most likely outcome for France’s research policies after the elections, says Rémi Barré, a science-policy expert and an emeritus researcher at the National Conservatory of Arts and Crafts in Paris. Reforms instigated under the presidencies of Jacques Chirac and Nicolas Sarkozy, and refined under François Hollande — such as efforts to give universities more independence from the state — are likely to carry on. Economic constraints mean that the next president and government will probably have little opportunity to raise research budgets significantly, he says.