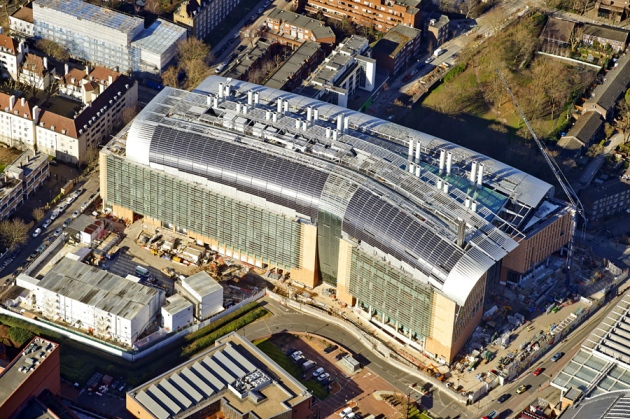 A landmark addition to London’s science scene is on a collision course with the expansion of the city’s transport system. The Francis Crick Institute warns that vibrations and electromagnetic fields generated by Crossrail 2, a proposed railway line that would skirt the institute, could interfere with scientific work there. The teams behind both efforts are now seeking a solution.

Set to employ 1,250 scientists and to have an annual budget of more than £100 million (US$154 million), the Crick, as it is known, is destined to become one of Europe’s medical-science powerhouses. Construction is due to be completed in November. The warnings about Crossrail 2 first emerged from the UK Medical Research Council (MRC), which provided the lion’s share of the Crick’s construction budget and will move staff from its National Institute of Medical Research (NIMR), in another part of London, to the new facility.

In public documents submitted to a UK parliamentary committee and discussed at the MRC over the past year, the council warned of “potentially serious consequences for operation of sensitive scientific equipment” if Crossrail 2 goes ahead, and said that “expensive remediation works” might be required.

The Crick has now sounded its own warning in a statement to Nature: “The Crossrail 2 trains stopping and starting at the proposed station would have an electromagnetic impact on our imaging facilities.” The imaging equipment — which includes nuclear magnetic resonance spectrometers, electron microscopes and super-resolution microscopes — will support “a significant component” of research at the building, says the Crick.

When the institute was first proposed, some scientists at the NIMR raised concerns about interference from multiple railway lines that already surround the site (see ‘Science in the city’). MRC chief executive John Savill says that the Crick’s design “fully took into account” vibration, noise and electromagnetic interference from these; the Crick team says that it deliberately located its imaging facilities away from the major Thameslink line. But in 2013, Crossrail 2’s proposed route was modified to allow the line to connect with Euston station, which, says the Crick, would place the railway too close to the imaging facilities. 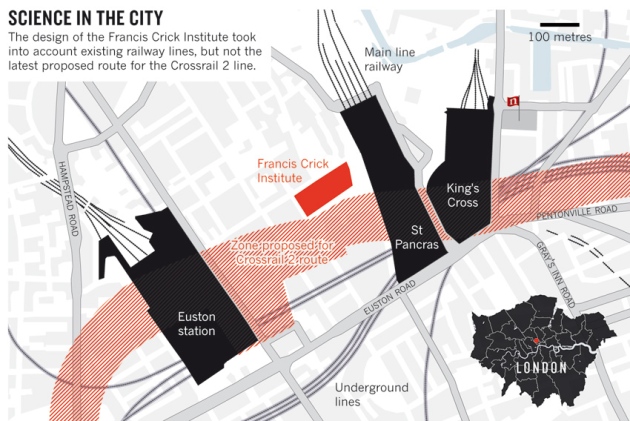 The government will decide next month whether to use the proposed route in the next stage of planning; the Crossrail 2 team hopes to start construction in 2020 at the earliest.

“The Department for Transport has given assurances that the route selected will not impede any research activities due to interference from railway operations or construction works,” says Savill. Transport for London (TfL), the local government organization that is driving the Crossrail 2 plans, says that it takes the concerns “very seriously”. The MRC is now working with TfL to find a solution.

The Crick team would like Crossrail 2 to be diverted back to its former route, away from the institute. But Michèle Dix, managing director for Crossrail 2, says that plans have already changed because of concerns from the Crick. Among other things, the planned tunnel has been shifted farther underground. “You can’t just keep on moving it deeper and deeper,” she says, adding that further concerns should be addressed through engineering — for example by making the tunnel linings thicker.

Daniel Moylan, a TfL board member and a transport adviser to London mayor Boris Johnson, says that the mayor is a huge supporter of both Crossrail 2 and the Crick. The latter is a major element in Johnson’s plans to promote the capital as ‘MedCity’ — a global hub for life-sciences research. Moylan is confident that the institute’s “legitimate” concerns can be allayed by means of technical solutions.

Objections from Parisian academics in the first half of the twentieth century are said to have affected the route of the Métro, but there have also been more-modern conflicts between scientific equipment and transport infrastructure. In 2013, the proposed route of a US light-rail line was diverted after concerns from the University of Colorado Denver about the effects on spectroscopy and microscopes at its medical campus in Aurora. In 2011, the University of Maryland in College Park dropped its opposition to a new ‘Purple Line’ link to the Washington DC Metro once the local transportation agency agreed to bury and shield power lines.

Other labs have depended on engineering solutions. The New York Structural Biology Center, located near a number of subway lines, placed its most sensitive equipment on concrete slabs attached directly to Manhattan bedrock. It experiences no problems from vibration now, says executive director Willa Appel. If there is no solution in London for the Crick, Appel says, “tell them they’re welcome to come here”.