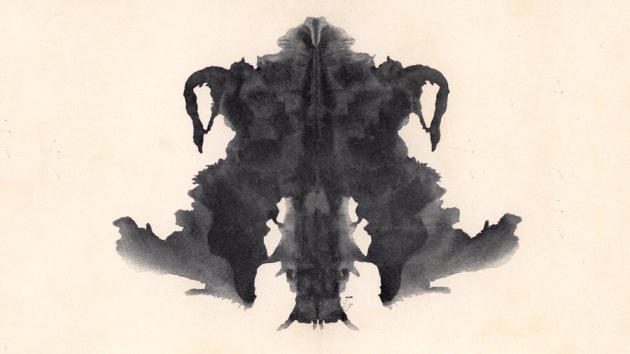 How many pictures do you see? The fractal edges are key to why Rorschach's ink blots induce image perceptions.

It’s easy to see familiar shapes in seemingly random patterns. Witness how many people see faces in clouds, for example — or in the 'poured' paintings of American artist Jackson Pollock, which he famously composed by dripping paint over the canvas. But Pollock disliked the idea that viewers of his paintings were distracted by such figures, which he called “extra cargo”. In fact, during his career, he is thought to have intuitively increased the complexity of his works to prevent the phenomenon.

Now, researchers may have revealed the basis of Pollock’s intuition — using the mathematics of fractal geometry. They have found that images with relatively low 'fractal complexity' generate a greater number of perceived forms. As this visual complexity increases, the number of perceived images decreases. The finding is published in PLoS ONE1.

A fractal is a repeating pattern that is apparent at every magnification. Examples in nature can be seen in snowflakes, cauliflowers and tree branches.

Fractal complexity is measured according to its D value, which reflects the amount of fine structure in an image. D runs from 1.0 — a smooth line with no fractals — to 2.0 for a completely filled-in block in which no lines, and so no fractals, are visible. 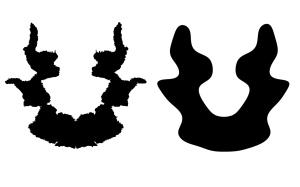 Rorschach’s blots (left) exist in a fractal sweet spot that allow images to been seen in them. In forms that have no fractal features at all (right), or too much fractal complexity, the ability to perceive hidden images is reduced.

Richard Taylor, a physicist and arts scholar at the University of Oregon in Eugene, was interested in why certain random patterns induce image perceptions. To find out, his team turned to the work of another radical figure from the past: the Swiss Freudian psychiatrist Hermann Rorschach.

Rorschach created ten symmetrical ink blots in 1921 for psychological tests. He asked patients to name each of the familiar objects that they saw in the stains. He interpreted their perceptions — whether they were flowers or guns, for example — to help him diagnose their psychological problems.

Although the idea that ink blots can reveal the mysteries of the human unconscious has long since fallen out of favour, Taylor wanted to know what it was about their jagged-edged shapes that triggered image perceptions, and whether this might be related to fractals.

So he and his colleagues analysed the fractal characteristics of Rorschach blots using edge-detection computer algorithms.

For simplicity, the team worked only with Rorschach’s five black blots, and not his multicoloured ones, because the researchers found that different tints had their own fractal characteristics. The D values of the black blots ranged from 1.1 to 1.3 — relatively low complexity.

Rorschach’s five black blots, from least to most fractal.

The scientists also hunted down two large historical data sets in which all of the images perceived in Rorschach’s blots, known as percepts, had been recorded, and extracted the total number of perceived shapes each blot could trigger. One data set, which had information from 1,050 people, recorded a total of 300 percepts for one of the blots.

Both data sets showed that, as D increased, the number of percepts decreased.

“Our results came as a bit of a surprise,” says Taylor. He had also anticipated finding that the blots had a mid-range fractal complexity that is commonly found in nature (around 1.3–1.5), and which the human visual system has adapted to. Taylor had previously found that the brains of people viewing fractals in this range show signs of stress reduction2.

Concerned that other characteristics of Rorschach’s handmade blots, such as variations in symmetry, orientation or shading, might have contributed to the result, the scientists repeated the experiment with 24 computer-generated blots that differed only in fractal complexity. These had D values fixed between 1.05 and 1.95.

The researchers recruited 23 university students, showed them each blot for ten seconds and told them to note all the images that they saw. Again, the team found that the number of percepts decreased with greater fractal complexity. They also found that images with a D of 1.1 generated the most percepts. 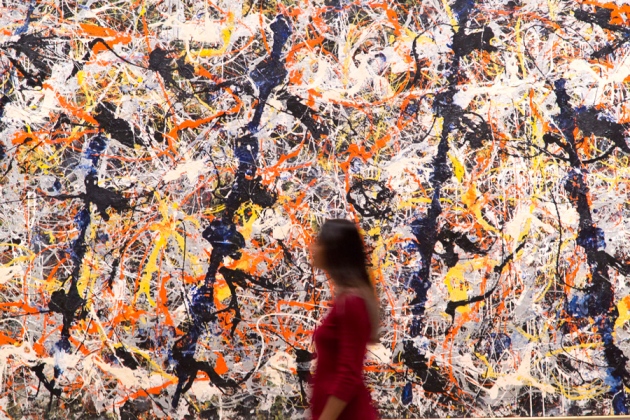 One of Jackson Pollock's later poured works, 'Blue Poles' (1952). He is thought to have intuitively increased the visual complexity of his works to prevent viewers from seeing figures in them.

“The results are rather counter-intuitive,” says psychologist Alex Forsythe of the University of Liverpool, UK, who studies how fractal patterns in artworks reflect the artist’s neurological state. “It makes me think that I should pay more attention to low fractal complexity in our studies.”

Taylor says that the work could be useful for studying the human visual system, and for designing improved camouflage materials.

And as for Pollock, Taylor says that he had been fascinated for the past 20 years by the “heated debate” among scholars about perceived images in the artist’s poured paintings.

The latest work suggests that artists such as Pollock have unconsciously picked up the ball on the fractal phenomenon, he adds — long before the mathematics were developed. “Now I have put this private puzzle to rest,” Taylor says.