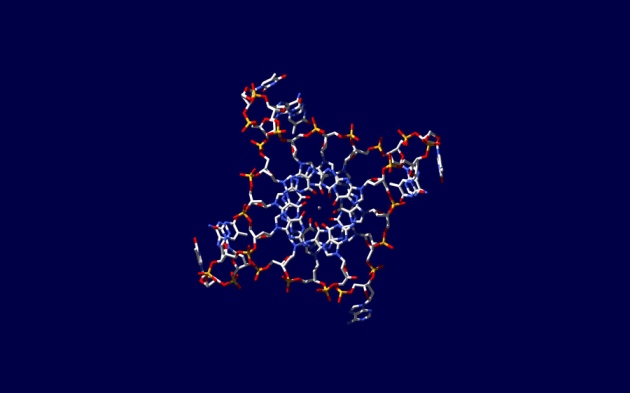 There is no more iconic image in biology than that of DNA's double-stranded helix, which coils and supercoils on itself to form dense chromosomes.

But a quite different, square-shaped type of DNA structure can easily be created in the laboratory by the folding of synthetic DNA strands rich in guanine, one of the building blocks of DNA. A G-quadruplex comprises four guanines from different places along a G-rich strand held together by a special type of hydrogen bonding to form a compact square structure that interrupts the DNA helix.

Scientists have long believed that these so-called 'G-quadruplex structures' may occasionally form in the DNA of living cells, and the first evidence of that surfaced in single-cell organisms in 20091.

In a paper published online today in Nature Chemistry2, researchers led by Shankar Balasubramanian at the University of Cambridge, UK, provide strong evidence that G-quadruplexes do occur in human cells — and that these unusual structures may have important biological functions.

After trawling through human genome data in search of other guanine-rich sequences, some scientists have suggested that quadruplexes could also be created in other areas of the genome involved in regulating genes, particularly some cancer-causing genes.

This seems likely to be the case, Balasubramanian and colleagues found. They engineered an antibody that binds tightly and specifically to G-quadruplex structures and does not bind to double-stranded helical DNA. When they incubated the antibody with human cells in culture, they found that it bound to many different sites in the chromosomes, only around a quarter of them in telomeres.

“It’s early days, but if we can map exactly where these G-quadruplex structures pop up in the genome, we may learn how better to control genes or other cellular processes that go awry in diseases like cancer,” he says. “That’s the long-term vision anyway.’’

The first version of this article stated that the new results provided the first evidence of the quadruple structure in living cells, but it had been seen in single-cell organisms before.