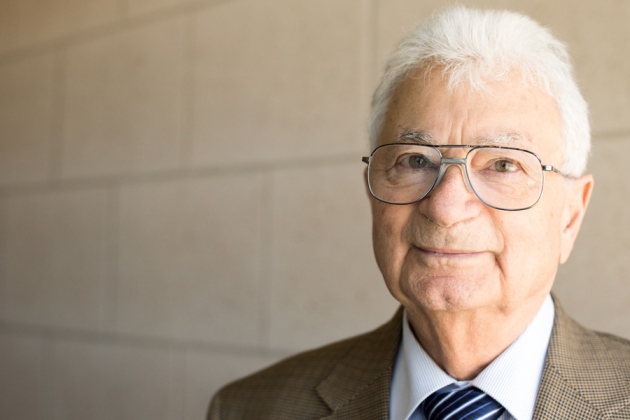 Yuri Oganessian helped to discover many superheavy elements — and now one may be named after him.

The periodic table will soon have four new names added to its lower right-hand corner.

The laboratories that were credited with the discovery of the elements — in Russia, the United States and Japan — got to propose the names, under the constraint that elements can be named only after one of their chemical or physical properties, a mythological concept, a mineral, a place or country, or a scientist.

“Although these choices may perhaps be viewed by some as slightly self-indulgent, the names are completely in accordance with IUPAC rules,” said Jan Reedijk, president of IUPAC’s inorganic-chemistry division, in a media statement.

Perhaps the most striking choice, although it was widely predicted, is for element 118, oganesson. It is named after Yuri Oganessian, an 83-year-old researcher at Russia’s Joint Institute for Nuclear Research (JINR) in Dubna, who has helped to discover numerous superheavy elements. It will mark only the second time that an element has been named after a living scientist. The first such occasion led to huge controversy, when in 1993, a team at the Lawrence Berkeley National Laboratory in Berkeley, California, proposed naming element 106 seaborgium, after US nuclear-chemistry pioneer Glenn Seaborg. At first, a IUPAC committee rejected the proposal after passing a resolution that elements should not be named after living scientists, but it ultimately relented.

Moscovium (115) — named after the Moscow region — honours “the ancient Russian land that is the home of the Joint Institute for Nuclear Research”, says IUPAC. And tennessine (117) “is in recognition of the contribution of the Tennessee region, including Oak Ridge National Laboratory, Vanderbilt University, and the University of Tennessee at Knoxville, to superheavy element research”. A collaboration between the JINR, Lawrence Livermore National Laboratory in Livermore, California, and the Oak Ridge laboratory was credited with the discovery of these two elements.

Element 113, nihonium, is the first artificial element to be named in East Asia. When its creation was first claimed 12 years ago by a team at the RIKEN Nishina Center for Accelerator-based Science in Wako, near Tokyo, ‘japonium’ was suggested as a name. But the RIKEN group (which followed up with a more convincing report in 2012) chose nihonium instead: Nihon (日本) is one way to say ‘Japan’ in Japanese. “The name is proposed to make a direct connection to the nation where the element was discovered,” says IUPAC.

Before this, the most recent additions to the periodic table were flerovium (Fl, 114) and livermorium (Lv, 116). All such artificial elements, including the latest four, are created in trace amounts in the laboratory by smashing lighter atomic nuclei together — and last mere fractions of a second before they fall apart into smaller, more stable fragments.

IUPAC is allowing five months for public comment on the suggestions, but unless there is an upswell of public protest, the names will be confirmed in November.

The original version of this article gave the wrong symbol for tennessine and muscovium.