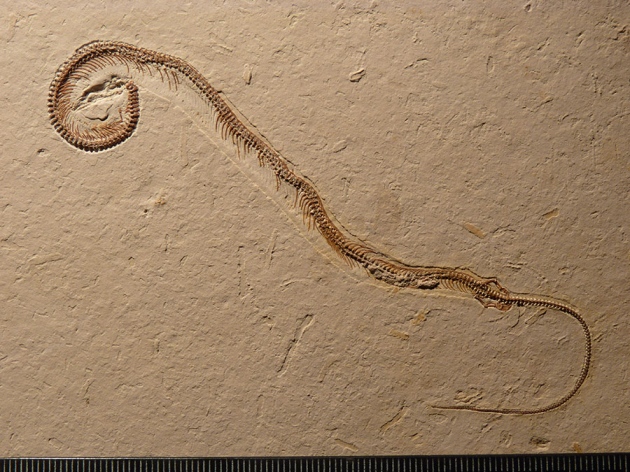 The fossil of Tetrapodophis amplectus, a four-legged snake.

A unique fossil of a four-legged snake that created a scientific sensation in July is now provoking a legal dispute. Brazilian authorities are opening an investigation into whether the fossil was taken out of their country illegally and should therefore be repatriated.

For some palaeontologists, the investigation revives a long-standing debate: how much of a responsibility researchers and scientific journals have to uphold the legality of the specimens on which they report — perhaps by refusing to publish work on fossils potentially obtained through illegal means, or by informing national authorities of suspicions over a fossil's provenance. But others say that taking such a cautious approach could leave important fossils languishing in obscurity in private collections around the world.

Palaeobiologist David Martill of the University of Portsmouth, UK, first spotted the snake specimen (Tetrapodophis amplectus) in a private collection in a museum in Solnhofen, Germany, in 2012. Brazil made it illegal in 1942 to sell or export fossils without governmental permission; so it seems possible that the fossil was carried illegally across borders. “We will formalize a request for investigation with the Brazilian Federal Police, in order to ascertain how this fossil specimen left Brazil,” says Felipe Chaves, head of the fossil division of the Brazilian National Department of Mineral Production in Brasilia. “We know some details that merit being investigated,” he adds — but he declined to say more. The museum did not reply to Nature’s requests for comment.

“Personally, I would have liked to see the fossil go back to Brazil, but it wasn't my fossil, and so it wasn't my choice. We did discuss at length whether the specimen should be returned, given that we were uncertain about when it left. But the counterargument was that there was no evidence that any laws had been broken, either,” says Nicholas Longrich, a palaeontologist at the University of Bath, UK, and a co-author with Martill of a paper published on 23 July1 describing the specimen.

Chaves learned about the fossil only when the paper was published. He says that scientists should have informed Brazilian authorities when they discovered its likely provenance. But Martill sees no need. “There are hundreds, if not thousands, of Brazilian fossils [in museum collections] all over the world,” he says. “It is a bit distracting if scientists have to mess about with the legality of fossils before they study them,” he adds. “I see thousands of fossils every year from all over the planet. I am not going to write to the governments of all those countries just to check each and every fossil.”

The wider issue is a familiar argument for palaeontologists. In Martill’s view, protectionist laws on fossil trading (which have been adopted not just by Brazil, but also by China, Mongolia and Morocco) hamper scientific research, because, although well intentioned, these regulations can restrict access to scientifically valuable specimens. And in practice, fossil hunters and traders have regularly flouted Brazil’s laws, despite recent attempts by authorities to crack down on the crime.

But James Clark, a palaeontologist at the George Washington University in Washington DC, says that researchers should not publish articles about fossils whose procurement might have been illegal. “From what I have seen, they should not have published the paper,” he says.

“We are, of course, aware of the difficult questions that have been raised concerning fossils from private collections. This is an issue that we will be evaluating further,” said a spokesperson for Science, which published the work. The journal does not have explicit policies requiring that fossils it publishes are legal — but nor do most other research journals, including Nature and specialized palaeontology publications. One, Cretaceous Research, notes in its author guidelines that fossils of uncertain origin will not be accepted for publication, even if they are housed in a museum but (as with the T. amplectus fossil) lack collection or ownership records.

It is unclear whether the Brazilian investigation will make much progress, Clark says. “Given that several German institutions are known to house Brazilian fossils of suspicious provenance, I doubt there is much the Brazilians are able to do about it.”

“It is my feeling that the lawyers and embassies should fight it out amongst themselves and just let the scientists get on with plying their trade,” Martill says, adding that he, like Longrich, is happy for the specimen to be returned to Brazil, if authorities deem it necessary.  “I don't care a jot where the specimen is… so long as it is in a safe and accessible place for future scientists to research it.”