Fossilized skulls show that at least three distinct species belonging to the genus Homo existed between 1.7 million and 2 million years ago, settling a long-standing debate in palaeoanthropology.

A study published this week in Nature1 focuses on Homo rudolfensis, a hominin with a relatively flat face, which was first identified from a single large skull in 1972. Several other big-skulled fossils have been attributed to the species since then, but none has included both a face and a lower jaw. This has been problematic: in palaeoanthropology, faces and jaws function like fingerprints for identifying a specimen as a particular species (which is indicated by the second word in a Linnaean title, such as 'rudolfensis'), as opposed to the broader grouping of genus (the first word, as in'Homo'). 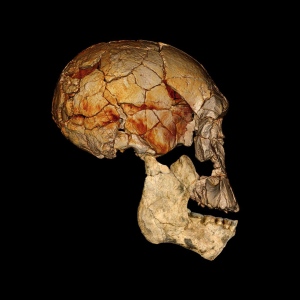 An upper skull found in 1972 and a newly discovered lower jaw are both thought to belong to the enigmatic hominin species Homo rudolfensis.

Without complete skulls, it has been difficult to reach a consensus on whether specimens attributed to H. rudolfensis are genuinely members of a distinct species, or actually belong to other Homo species that lived around the same time, such as Homo habilis or Homo erectus. Understanding how many different Homo species there were, and whether they lived concurrently, would help to determine whether the history of the human lineage saw fierce competition between multiple hominins, or a steady succession from one species to another.

But the latest result has dissipated much of this uncertainty. It concerns three fossils — two lower jaws and a juvenile’s lower face — that were found in a desert area called Koobi Fora in northern Kenya. The team that pulled them out of the ground, led by Meave Leakey, a palaeontologist at the Turkana Basin Institute in Nairobi, describes how the dental arcade, the arch created by the teeth at the front of the mouth, is nearly rectangular, just like the palate structure of the 1972 skull. By contrast, the average modern human mouth has a curved dental arcade.

Further evidence comes from the juvenile’s face, which tellingly has cheek bones joining the palate quite far forward. “It was such an extended excitement as the juvenile face slowly emerged from the encasing rock, and its similarity to the 1972 specimen became so striking,” recalls Leakey.

Yet in many ways, the team’s findings present more questions than answers.

One known lower-jaw specimen, dubbed KNM-ER 1802 and widely considered to belong to an individual H. rudolfensis, seems to have a more rounded dental arcade than the latest fossils. This has led Leakey and her colleagues to propose that KNM-ER 1802 belongs to a different Homo species — possibly H. habilis. But until more H. habilis bones are found, the team cannot be sure. “It could be a Homo habilis, but it could also be another species,” says Bernard Wood, a palaeontologist at George Washington University in Washington DC.

With as many as four Homo species (H. rudolfensis, H. habilis, H. erectus and whatever KNM-ER 1802 turns out to be) co-existing in one period of evolutionary history, researchers are wondering how different hominins may have behaved in each other's company.

“Because the geologic dating is so coarse, we can’t yet be entirely certain that these species were in the same places at the same times," says Wood. "Even so, it is perfectly possible that they were interacting — and if that was so, boy, wouldn’t we like to know what those interactions were like."

However, Tim White, a palaeontologist at the University of California, Berkeley, argues that Leakey and her colleagues are putting the cart before the horse. “How can practitioners in this field possibly expect to be able to accurately identify fossil species based upon a few teeth, jaws and lower faces in light of what we know about the great variation found among different individuals in a single living species?” he asks.

Leakey stands her ground. “I would challenge Tim to find any primate in which you would see the same degrees of variation as those that we are seeing between our new fossils and KNM-ER 1802," she retorts.