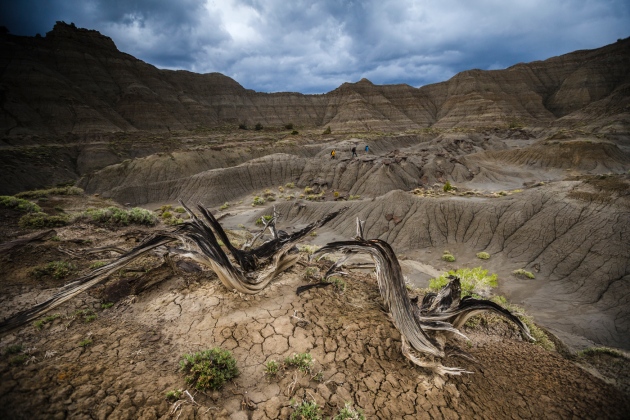 Plant-eating dinosaurs usually found plenty to eat, but occasionally they went looking for a nutritional boost. Fossilized dinosaur droppings from Utah now reveal that 75 million years ago, some of the animals were snacking on prehistoric crayfish or crabs.

The work suggests that big herbivorous dinosaurs sometimes munched on crustaceans, likely to get extra protein and calcium into their bodies before laying eggs, says Karen Chin, a palaeontologist at the University of Colorado Boulder. She and her colleagues report the discovery on 21 September in Scientific Reports1.

“It’s a very unusual case of an herbivorous dinosaur supplementing its diet with something else,” says Paul Barrett, a palaeontologist at the Natural History Museum in London.

Direct evidence of dinosaur diets is hard to come by. Some fossil animals have been found with their gut contents intact, but fossilized dinosaur dung — the most convincing remains of what a dinosaur actually ate — is rare. “Think of a cow pat — these things get broken down in the environment very easily,” says Barrett. Most of the fossilized faeces, called coprolites, that researchers uncover come from meat-eating dinosaurs; these are better preserved than those of plant-eating dinosaurs thanks to minerals in the bones of the creatures that carnivores consumed.

Chin has long hunted for coprolites from herbivorous dinosaurs. In 2007, she reported2 finding fossilized chunks of rotting wood inside coprolites, between about 80 million and 74 million years old, from the Two Medicine rock formation in Montana. Plant-eating dinosaurs may have chewed the wood in search of insects and other organisms scurrying inside rotting logs, she proposed.

Then, in 2013, she found many similar coprolites in the Kaiparowits Formation of Grand Staircase–Escalante National Monument in southern Utah. Along with rotting wood, they contained puzzling fragments of thin, convex structures. When Chin examined slices of the structures under a microscope, they looked very much like the outer covering of a crustacean’s leg or claw. She consulted Rodney Feldmann, a palaeontologist at Kent State University in Ohio, who confirmed that they probably came from a crayfish or crab.

At the time the Kaiparowits rocks formed, around 75 million years ago, the landscape was a wet, subtropical environment much like today’s Texas coast. Chin thinks that local dinosaurs — probably the duck-billed group called hadrosaurs — went in search of dietary supplements near the shoreline. “You get so many invertebrates hanging out in rotting logs,” she says. “There’s bugs to eat, and rotting detritus — it’s a really rich place.” The fungi that helped to break down the logs would also have provided extra protein. 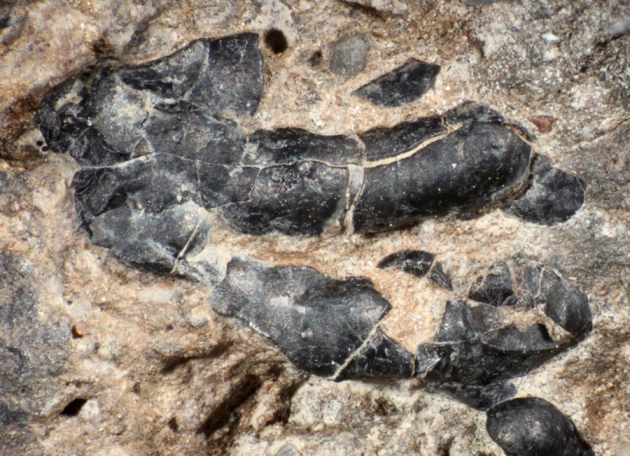 Fossilized faeces (brown) from the collections of the Denver Museum of Nature and Science show crustacean fragments (black).

Some modern birds with mostly plant-based diets add insects and other sources of protein before they lay eggs, she notes. “You can’t imagine a 20-foot hadrosaur going after a butterfly,” Chin says. “They would go for some place that had a predictable, concentrated source of food — some place like rotting logs.”

The rotting wood probably wasn’t a main source of dinosaur food year-round, says Jordan Mallon, a palaeontologist at the Canadian Museum of Nature in Ottawa. “Hadrosaurs were some of the biggest animals in their ecosystems, so they probably couldn’t have afforded to be too selective about what they were eating anyway, lest they starve to death.”

Mallon thinks the dinosaurs might have accidentally snaffled up a crayfish or two while feeding, as opposed to seeking the crustaceans out on purpose. Either way, he says, the latest findings “provide an excellent glimpse in the lives of these animals, 75 million years ago”.