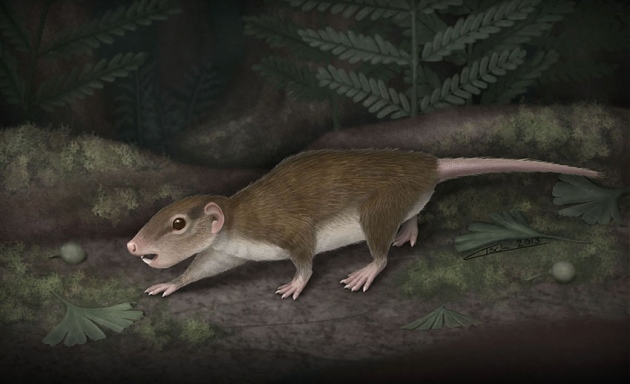 This chipmunk-sized animal, which lived around 160 million years ago, belonged to a group destined to become among the most successful of all mammals.

The earliest known members of a group of mammals that survived for 130 million years already had the anatomical features that enabled the animals to thrive in the shadows of dinosaurs — and to survive through their mass extinction.

A nearly complete skeleton described by palaeontologists belonged to a mammal that lived about 160 million years ago in what is now northeastern China. The animal was one of the earliest of the multituberculates — rodent-like mammals known by their distinctive, many-cusped teeth hat lend the group its moniker.

During most of their 130-million-year existence — one of the longest known for any mammalian lineage — these diverse creatures were the dominant mammals and occupied many ecological niches, says Zhe-Xi Luo, a vertebrate palaeontologist at the University of Chicago. Some multituberculates lived in trees, many were ground-dwellers and some even burrowed. “Before rodents came along, multituberculates played the same roles” that rodents would eventually claim in their ecosystems, he says.

Writing today in Science1, Luo and his collaborators dubbed the earliest species Rugosodon eurasiaticus. 'Rugosodon' refers to the rugosity, or wrinkliness, of the mammal's distinctively shaped teeth. The animal is thought to have weighed between 65 and 80 grams, about the same as a mid-sized chipmunk.

Previously, the earliest multituberculates were known only from skull fragments, jawbones and teeth. But the latest fossil is more than two-thirds complete, unveiling a suite of anatomical features that until now had been seen only in later members of the lineage.

For instance, Rugosodon had a remarkably flexible ankle that allowed the foot to hyperextend downward — as in a ballerina standing on her tiptoes — and to rotate through a wide range of motion. That flexibility, along with a highly mobile digit analogous to the human big toe, would have enabled the presumably ground-dwelling creature to move deftly over rough terrain. This feature is seen in multituberculates, but not in other mammalian lineages of the era.

Rugosodon also had an incredibly flexible spine, giving the creature great capacity to both twist left and right and to bend back and forth at the waist. The shape and arrangement of the animal's teeth suggest, on the basis of comparisons with modern mammals, that Rugosodon consumed a mixture of fruits, seeds and animals, including worms, insects and even small vertebrates.

The flexibility of multituberculates, both in the physical sense and the dietary sense, was what made them to be so evolutionarily successful, says Brian Davis, a vertebrate palaeontologist at the University of Louisville in Kentucky. The group is underappreciated for the role it played in ancient ecosystems, he adds. “People often forget about them because they didn’t leave any descendants.”

Just last week, researchers described two new fossils from the same era and the same part of the world2, 3. Although the authors assigned those creatures to a group known as haramiyids, Guillermo Rougier, a vertebrate palaeontologist at the University of Louisville in Kentucky suggested that one of the creatures, called Arboroharamiya, could actually be a multituberculate. Now Rougier says that detailed comparisons between Rugosodon and Arboroharamiya would help clarify how all these animals relate to one another.

“The skeleton and skull [of this fossil] give us a clearer view of the early members of this prolific lineage,” says Gregory Wilson, a vertebrate palaeontologist at the University of Washington in Seattle. And it will help researchers to better position the multituberculate branch in the mammalian family tree, he adds. Possibly of more importance, it gives palaeontologists a better sense of what the evolutionary precursors of multituberculates might have looked like — ideas that can be confirmed only by future fossil finds.

Multituberculates were so successful as a group that they survived the mass-extinction event that killed off the non-avian dinosaurs — and about 75% of the species then on Earth — about 66 million years ago. For reasons not yet known, the multituberculate lineage disappeared around 35 million years ago, around the time that rodents emerged on the evolutionary scene — which was possibly not a coincidence, says Luo.