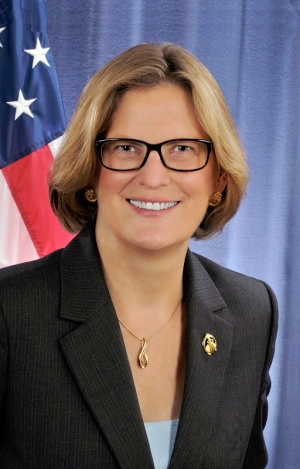 Kathryn Sullivan once walked in space as a pioneering female astronaut. These days, the oceanographer is sticking closer to Earth, as US President Barack Obama’s choice to lead the US National Oceanic and Atmospheric Administration (NOAA).

Sullivan has been NOAA’s acting administrator since Jane Lubchenco left the post in February. On 1 August, Obama nominated her to be the permanent chief of the US$5-billion agency.

“I think it’s a great move,” says James Baker, who served as NOAA administrator from 1993 to 2001, and Sullivan was the agency’s chief scientist during part of that time. Baker says that Sullivan's experience with technology and satellites will be valuable. “That’s a big part of what NOAA does,” he says. “The satellite program is very expensive and always a big issue with Congress.”

Since returning to NOAA as its deputy administrator in 2011, Sullivan has overseen efforts to keep the agency’s ailing satellite programmes on time and on budget. She has also led the agency’s work to prepare for a probable gap in data from the series of polar-orbiting satellites that feed observations to NOAA’s computer weather models.

Andrew Rosenberg, an oceanographer and former NOAA fisheries official, says that Sullivan will provide stability at a time of budget pressure and close scrutiny by some US lawmakers of NOAA’s mission. Republicans in the US House of Representatives have repeatedly pushed NOAA to focus on weather at the expense of research on climate and oceans, driven in part by their scepticism of human-driven climate change. “NOAA has an incredibly important part to play in the ongoing battle over climate science,” says Rosenberg.

Sullivan earned an undergraduate degree in Earth sciences from the University of California, Santa Cruz, and, in 1978, a PhD in geology from Dalhousie University in Halifax, Canada. Later that year, she was chosen as one of the first six women to join NASA’s astronaut corps. In 1984, was the first US woman to walk in space. In 1990, she helped to deploy the Hubble Space Telescope on the space shuttle mission that was piloted by Charles Bolden, now NASA's administrator. She moved to NOAA in 1993.

In 1996, Sullivan left the agency to become the president of the Center of Science and Industry, a science museum in Columbus, Ohio. In 2006, Sullivan became director of the Battelle Center for Mathematics and Science Education Policy at Ohio State University, also in Columbus.