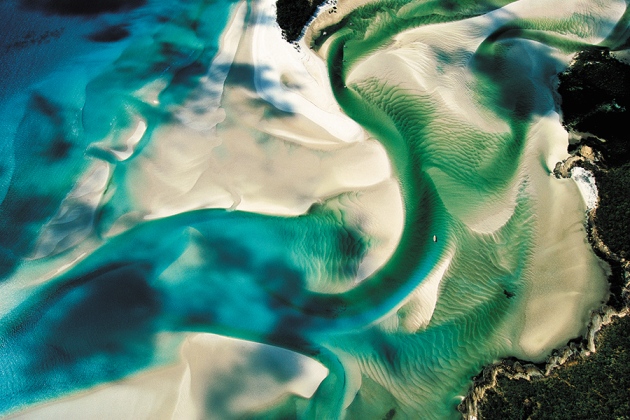 The ocean modulates Earth's climate and provides us with food, coastal protection, clean seawater and oxygen.

Only the latest assessment of the Intergovernmental Panel on Climate Change (IPCC)1, 2, in 2014, had dedicated chapters on the oceans. Now the IPCC is preparing a special interdisciplinary report on the ocean and cryosphere (Earth's snowy and icy regions). Next month, a group of scientists will decide what to include in the report, which will be published in 2019.

Offering robust projections that can be translated into practical policy is central. The report must join up with the United Nations' Sustainable Development Goals. For example, goal 14 tasks governments to “sustainably manage and protect marine and coastal ecosystems from land-based pollution, as well as address the impacts of ocean acidification”. The report must help marine managers to make decisions here and now.

The IPCC needs to shift its approach. It must offer both short-term climate-change projections and longer-term ones, and acknowledge the variable nature of the oceans — not just global average trends. Its report must include: forecasts of how fluctuations and shifts in surface temperatures and pH are driven by both natural and anthropogenic climate change; near-term predictions of extreme conditions such as marine heat waves on regional scales; and the biological mechanisms that underpin how key organisms, and hence important ecological systems, respond to climate change.

This will take the IPCC out of its comfort zone. Decadal projections and regional foci represent greater uncertainties. But such information is necessary to safeguard our seas.

The impacts of climate change on the oceans are usually depicted using graphs. Lines represent projections of long-term globally averaged quantities such as relentless rises in mean sea surface temperature or acidification. But the real ocean is noisy. Its conditions simultaneously undergo fast and slow variations as well as local, regional and global ones.

It is important to quantify the long-term average state of the ocean. Eventually, the influence of anthropogenic climate change will be larger than that of ongoing natural variability3. This transition is known as the emergence. But we are not there yet. The present oceanic signature of anthropogenic climate change is still comparable to, and thus difficult to disentangle from, natural and regional climate variability such as the El Niño Southern Oscillation, cycles in winds and sea surface temperatures over the tropical east Pacific Ocean.

Emergence will happen at different times in different places. For example, the tropics are already recording extreme temperatures, whereas the emergence is several decades away at mid-latitudes4. 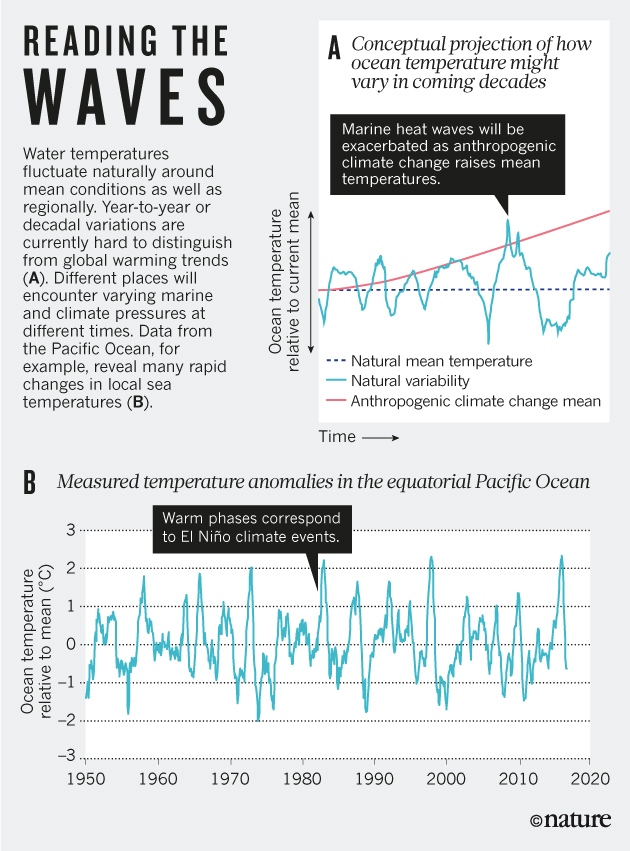 As anthropogenic climate change increases, periods of extreme conditions6 are expected to become more frequent, severe and lengthy. These will have adverse effects on marine ecosystems7. For example, in 2011 the west coast of Australia encountered sea surface temperatures that were 2–4 °C warmer than average for 10 weeks. Its kelp forest, usually 800 kilometres long, shrank by 43%7.

These fluctuations are confusing for marine-resource managers, policymakers and the public. They make decisions about how best to adapt to climate change difficult, and short term forecasts unreliable.

Policymakers and marine managers need to know more about this variability and its impacts. Regional and local scales are most pertinent to managing marine resources. There will be hotspots of change, such as sites of marine heat waves7, or places where regional warming exceeds the global average, such as the western Antarctic Peninsula. Yet limits to the resolution and boundary conditions of global circulation models make it hard to represent changes in coastal regions. Regional projections from global climate models rarely agree and they exclude other human stressors such as fishing pressure and pollution.

The IPCC special report needs to tease apart how combinations of global, regional and local stressors will increase pressures on marine ecosystems and services in particular places. This would help local managers to buy time to mitigate the combined effects of multiple factors. For example, managing the run-off of sediment, nutrients and contaminants into coastal waters near Australia's Great Barrier Reef (see, for example, go.nature.com/2ex5leq) should give corals respite from devastating outbreaks of crown-of-thorns starfish (Acanthaster planci) that can add to the regular stress of bleaching (expelling algae under warmer conditions) during El Niño events.

Developing regional and local marine policies requires better understanding of governance mechanisms, management and trade practices too. The IPCC report should include examples of using local know-how to underpin policies from across the three IPCC working groups (such as the Great Barrier Reef example). The focus is still too much on physical signals of climate change8. Interdisciplinary studies need to be done on the legal and economic frameworks that support regional resilience — social and ecological.

A final challenge for ocean scientists is to describe how marine life in diverse ecosystems will respond to the complex matrix of anthropogenic change8. Biologists do not understand fully the cumulative responses of the key components of ecosystems to a changing climate. What we have now are snapshots of how a few species within coastal food webs react to more acidic or warmer conditions.

Organisms may react in a nonlinear way1. If a species is already living in the warmest conditions it can handle, any further temperature rise will have lethal consequences, whereas a cooling would improve fitness. For example, many species of plankton in the tropical ocean are thought to be close their upper temperature limits8.

Experiments need to reflect the wider range of changes to local ocean conditions that will occur in the coming years and decades. And researchers need to consider how extremes and fluctuating conditions affect physiologies. For example El Niño events may increase the mortalities of some species in the Pacific by adding to anthropogenic warming; whereas the cooler La Niña phase of the cycle would offer respite. How these processes balance out, if the periods of relief are long enough to allow recovery, and which species will be most affected are all open questions. This uncertainty is fundamental to our ability to predict the societal impacts of these ecological changes.

Places where warming is now above the global average are natural laboratories9. They include marine sanctuaries such as the Galapagos Islands and areas where humans rely heavily on ocean resources, such as southeast Asia and western Africa9. Environmental impact assessments in these places have revealed that some ecological changes, such as the loss of Australian kelp, are irreversible even if the physical environment returns to average conditions7. During heat waves, for instance, warmer water species migrate into colder water habitats, where they may replace the endemic species. Extreme events therefore can push ecosystems past tipping points.

Describing the oceans' variability will ensure that the IPCC report builds a bridge to the sustainable development goals. This must be reflected in the choices made in December's meeting of ocean experts.