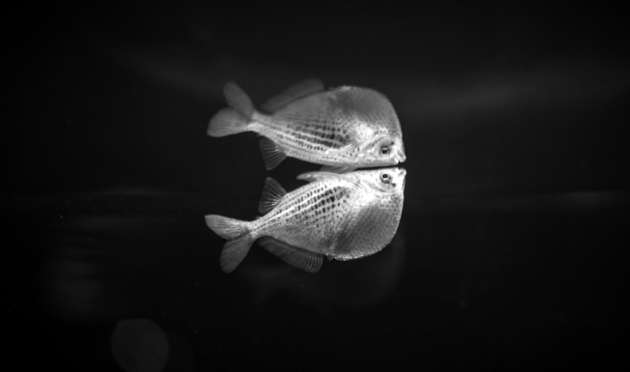 Life is made largely of molecules that are different than their mirror images.

Physicists have found hints that the asymmetry of life — the fact that most biochemical molecules are ‘left-handed’ or ‘right-handed’ — could have been caused by electrons from nuclear decay in the early days of evolution. In an experiment that took 13 years to perfect1, the researchers have found that these electrons tend to destroy certain organic molecules slightly more often than they destroy their mirror images.

Many organic molecules, including glucose and most biological amino acids, are ‘chiral’. This means that they are different than their mirror-image molecules, just like a left and a right glove are. Moreover, in such cases life tends to consistently use one of the possible versions — for example, the DNA double helix in its standard form always twists like a right-handed screw. But the reason for this preference has long remained a mystery.

Many scientists think that the choice was simply down to chance. Perhaps, in one of the warm little ponds filled with organic chemicals where life arose, a statistical fluke generated a small imbalance in the relative amounts of the two versions of one chemical. This small imbalance could have then amplified over time.

But an asymmetry in the laws of nature has led others to wonder whether some physical phenomenon could have tipped the balance during the early stages of life. The weak nuclear force, which is involved in nuclear decay, is the only force of nature known to have a handedness preference: electrons created in the subatomic process known as β decay are always 'left-handed'. This means that their spin — a quantum property analogous to the magnetization of a bar magnet — is always opposite in direction to the electron's motion.

In 1967, biochemist Frederic Vester and environmental scientist Tilo Ulbricht proposed that photons generated by these so-called spin-polarized electrons — which are produced in the decay of radioactive materials or of cosmic-ray particles in the atmosphere — could have destroyed more of one kind of molecule than another, creating the imbalance. Some physicists have since suggested that the electrons themselves might be the source of the asymmetry.

But the hunt to find chemical processes through which electrons or photons could preferentially destroy one version of a molecule over its mirror image has seen little success. Many claims have proven impossible to reproduce4, 5. The few experiments in which electron handedness produced a chiral imbalance could not identify the chemical process behind it, says Timothy Gay, a chemical physicist at the University of Nebraska–Lincoln and a co-author of the latest study1. But pinpointing a chemical reaction would help scientists to rule out some candidate causes of the process and to better understand the physics that underlie it, he adds.

Gay and Joan Dreiling, a physicist also at the University of Nebraska–Lincoln, fired low-energy, spin-polarized electrons at a gas of bromocamphor, an organic compound used in some parts of the world as a sedative. In the resulting reaction, some electrons were captured by the molecules, which then were kicked into an excited state. The molecules then fell apart, producing bromide ions and other highly reactive compounds. By measuring the flow of ions produced, the researchers could see how often the reaction occurred for each handedness of electron.

In all cases the asymmetry was tiny, but consistent, like flipping a not-quite-fair coin. “The scale of the asymmetry is as though we flip 20,000 coins again and again, and on average, 10,003 of them land on heads while 9,997 land on tails,” says Dreiling.

The low speed of the electrons was the key to why the experiment finally worked after so many years, Dreiling says. “The interaction takes longer, and it was that insight, I think, that led to our success,” she says.

The test offers an explanation for how a chiral excess could — at least in principle — arise, Gay says. The research was published in Physical Review Letters1 on 12 September.

The idea that spin-polarized electrons could transmit their asymmetry to organic molecules is attractive, says Uwe Meierhenrich, an analytical chemist at the University of Nice Sophia Antipolis in France. The tiny effect that Gay and Dreiling observed would have to be amplified to affect the chemistry of life as a whole — but there are known mechanisms for such amplification, he says. “From my point of view, the main question does not concern the amplification processes, but the first chiral-symmetry breaking,” he says.

Meierhenrich says that he would like to see the experiment repeated with chiral molecules that are relevant to the origin of life, such as amino acids, to see whether the left-handed electrons produce the same effect.

Even if spin-polarized electrons caused life to become chirally selective, it is still unclear what would have produced those electrons in the first place. Sources of β particles include phosphorus-32 decaying into sulphur-32, or the decay of muons, elementary particles produced at the end of a chain of decays that begin when cosmic ray particles hit the atmosphere. In both cases, the electrons would have been travelling much faster than in Gay’s reaction, but he says that it is possible for electrons to slow down without losing their chirality.

Slower-moving, left-handed electrons are produced in other ways than via β decay, says Richard Rosenberg, a chemist at the Argonne National Laboratory in Illinois. In 2008 he and his team showed2 that irradiating a layer of magnetized iron with X-rays could also produce a chirality preference. Chirality could therefore also have been created in molecules stuck to magnetized particles in a dust cloud or comet, he says.

Gay and his colleagues plan to look at similar reactions with other varieties of camphor molecules to understand how the spin of an electron dictates which of two chiral molecules it prefers.

The interaction of left-handed electrons with organic molecules is not the only potential explanation for the chiral asymmetry of life.. Meierhenrich favours an alternative — the circularly polarized light that is produced by the scattering of light in the atmosphere and in neutron stars3. In 2011, Meierhenrich and colleages showed4 that such light could transfer its handedness to amino acids.

But even demonstrating how a common physical phenomenon would have favoured left-handed amino acids over right-handed ones would not tell us that this was how life evolved, adds Laurence Barron, a chemist at the University of Glasgow, UK. “There are no clinchers. We may never know.”