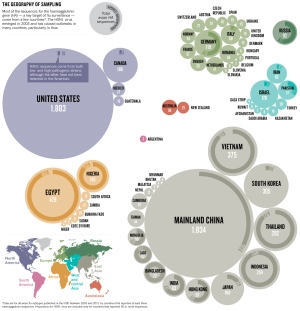 When researchers created strains of the H5N1 avian influenza virus that could spread easily between mammals, they argued that their work would aid in surveillance, by identifying mutations to watch for in the wild.

But an analysis by Nature paints a dire picture of how animal flu viruses are being monitored. In 2010, the world’s poultry population was estimated at 21 billion, yet only around 1,000 flu sequences from 400 avian virus isolates were collected — and many countries that are home to billions of farmed chickens, ducks and pigs contributed few or none.

In addition, the surveillance is typically not sustained, but instead is ad hoc and reactive, and is largely in response to disease outbreaks or temporary research projects. But a flu virus that emerges anywhere, at any time, can threaten the entire planet. The Nature analysis “highlights a global problem: lack of data”, says Ian Brown, head of avian virology and mammalian influenza at the Animal Health and Veterinary Laboratories Agency lab in Weybridge, UK.

Timely global surveillance of animal flu viruses is crucial not just for identifying pandemic threats, but also for detecting outbreaks, monitoring how viruses are evolving, understanding risk factors that enable them to spread and keeping animal vaccines and diagnostics up to date.

To assess trends in global genetic surveillance, Nature analysed the records of non-identical sequences from all subtypes of avian and pig flu deposited in the US National Center for Biotechnology Information’s Influenza Virus Sequence Database between 2003 and 2011. The database contains sequences from GenBank and several large flu sequencing projects, including the Influenza Genome Sequencing Project — a major initiative run by the National Institute of Allergy and Infectious Diseases (NIAID) to boost the sequencing of existing isolates. The analysis covered all subtypes of flu virus, not just H5N1. That’s important, says Malik Peiris, a flu virologist and surveillance expert at the University of Hong Kong, because “H5N1 is not the sole pandemic candidate, and low pathogenic viruses are just as likely, if not more likely, to become pandemic”. 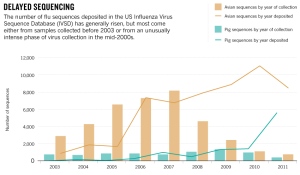 However, few contemporary data are available. The number of avian flu sequences from isolates collected in each year peaks in 2007 and plummets thereafter. The jump in the number of pig sequences also disappears (see ‘Delayed sequencing’).

Roughly 30% of the sequences are from isolates collected before 2003. The 2007 peak in avian viral sampling was largely the result of surveys of more than 100,000 wild birds to monitor for the arrival of H5N1 in the Americas1, 2. Also contributing was the sequencing of the H5N1 viral flare that moved from Asia into Europe and Africa in 2005 and 20063, 4. The older sequences can inform surveillance by showing how the viruses have evolved, says Peiris, but contemporary data are important “for real-time surveillance”, such as spotting changes that might herald dangerous strains.

Many years can pass between the collection and sequencing of isolates, says Sylvie van der Werf, head of the Molecular Genetics of RNA Viruses lab at the Pasteur Institute in Paris. One reason is that many of the virus samples are sequenced in retrospective research studies. Another is a lack of funding for sequencing, although falling sequencing costs are easing this bottleneck. The Influenza Genome Sequencing Project is also helping by generating vast quantities of sequences — it now accounts for half of all avian and pig sequences — but it is aimed at increasing the genomic knowledge base, rather than real-time surveillance.

Researchers, too, are contributing to the lag, because many do not share their sequences until after the data have been published. An exception is the Centers of Excellence for Influenza Research and Surveillance — a network created by the NIAID in 2007 to boost flu surveillance — which has a policy of releasing all sequence data within 45 days of its collection.

The two agencies responsible for monitoring disease outbreaks in animals — the Food and Agriculture Organization (FAO) of the United Nations and the World Organisation for Animal Health (OIE) — stipulate that sequences of potentially zoonotic viruses should be deposited in public databases within 3 months, but few researchers do so, says Ilaria Capua an avian-flu researcher at the Veterinary Public Health Institute in Legnaro, Italy, who champions greater availability of sequences5.

Nature also looked at where the sequences come from (see ‘The geography of sampling’). The picture that emerges is worse than some experts had thought. Almost all come from just a handful of countries — most countries have little or no genetic surveillance in place.

Just 7 of the 39 countries with more than 100 million poultry in 2010 collected more than 1,000 avian flu samples between 2003 and 2011. Eight countries — Brazil, Morocco, the Philippines, Colombia, Ecuador, Algeria, Venezuela and the Dominican Republic — collected none at all; 13 collected between 1 and 100; and 11 collected between 100 and 1,000. Even fewer pig sequences were collected, with one-third of the countries that are home to more than 4 million pigs depositing none at all (see ‘The pig in the room’).

The pig in the room

Surveillance of avian flu viruses is bad, but that of pig viruses is worse. Yet pigs are a serious pandemic risk: they can be co-infected with both human and avian flu strains, which means that they provide ample opportunity for gene swapping and, thereby, the emergence of pandemic strains such as the 2009 H1N1 pandemic virus.

The world is home to some 1 billion domestic pigs, almost half of which are in China, yet only 7,679 pig flu sequences were collected between 2003 and 2011. Just three countries — the United States, China and Hong Kong  — collected more than 1,000 swine flu sequences each, and around 200 countries collected none at all. Five of those countries – Russia, Poland, the Philippines, Denmark and the Netherlands — are each home to more than 10 million pigs.

In pigs, flu tends to be mild, so there is little economic incentive for surveillance. Moreover, the pork industry often doesn’t want the negative image of having swine flu detected in its farms.

Research teams at Hong Kong University, including one led by virologist Malik Peiris, are compiling one of the world's single largest sources of pig sequences. They get their viral isolates from abattoirs, which means that data can be collected for routine surveillance while leaving the source farm anonymous. Because more than 90% of the pigs slaughtered in Hong Kong come from ten provinces in mainland China, the reach and utility of these data extend far beyond Hong Kong.

The pandemic risk posed by pigs has also risen since 2009. The 2009 pandemic H1N1 virus, which is now endemic in pigs, is unusual in that it contains the triple reassortant internal gene (TRIG) cassette, a highly conserved set of six genes that allows the virus to swap genes with flu viruses from other species much more freely than the seasonal H1N1 that circulated before 2009 (see ‘Pandemic 2009 H1N1 virus gives wings to avian flu’). Seasonal H1N1 reassorted sparingly, but “we are noting lots of reassortment between the pandemic virus and endemic swine viruses”, says Peiris.

Another pig virus that has the TRIG cassette, H3N2, infected 12 people in the United States in 2011. “I think that this is just the tip of the iceberg and such reassortments are surely going on worldwide, globally changing the swine influenza virus landscape,” says Peiris. “This certainly is a source of concern for public health.”

The size of a country’s poultry population is no predictor of how many samples that country will generate (see ‘Many birds, few samples’). Countries that have well-developed veterinary services and a well-structured and hygienic farming industry inevitably have fewer flu sequences to report, as disease levels tend to be low, says Brown. However, many of the countries that have contributed few or no sequences have poor veterinary systems and flu-prone farming systems, such as backyard farms and mixed poultry and pig farms, which are often close to wild ducks and other flu reservoirs. 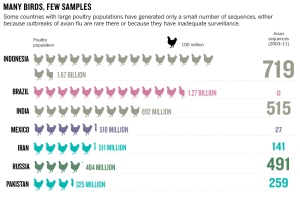 “Proper geographic representation is lacking,” says van der Werf, as is sustained surveillance. This results in large gaps in data, she says, because “many consecutive years of surveillance are needed to see trends” (see page 535). Poorer countries tend to have inadequate surveillance resources, and farmers often have little incentive to report outbreaks because they will not receive any compensation for culled livestock. Countries sometimes also fail to look for, or report, outbreaks so that they can claim they are free of infection and so avoid trade problems.

Flu experts say that the dire state of surveillance could be rapidly turned around by, for example, creating a network of sentinel sites, focusing on the countries and regions most at risk, that would collect isolates and sequence them in real time. Such a network would probably even cost less than the fragmented and uncoordinated surveillance efforts in place today, says Jeremy Farrar, director of the Oxford University Clinical Research Unit in Ho Chi Minh City, Vietnam (see page 534).

The problem is that no global body has overall responsibility for flu surveillance. The World Health Organization (WHO) runs a global network of labs for human flu surveillance and selects human strains to be included in vaccines for seasonal flu. Monitoring animals falls to the FAO, which tends to focus on food security, and the OIE, which looks mostly at animal health and trade.

What is needed is international leadership, says Farrar. “If, say, the WHO and the FAO were to construct an advisory framework, surveillance could probably be done much more systematically and efficiently.”