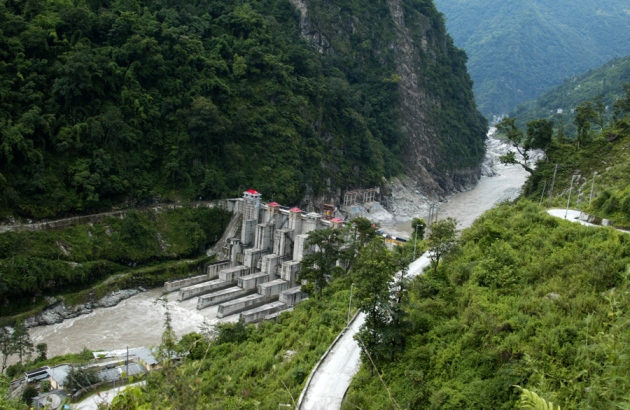 India’s hydroelectric projects, such as this dam on the River Teesta, are raising environmental concerns.

The days when the gigantic Indian rivers — the Ganges, Indus and Brahmaputra — roar freely down the steep slopes of the Himalayas may be numbered.

Roughly 300 dams are proposed or under construction in the deeply cut valleys of India’s mountainous north, part of a massive effort to meet the country’s spiralling energy demands. But the projects are facing fierce resistance from local communities, as well as from scientists who predict that the dams’ ecological impacts will be much greater than official environmental assessments suggest. “The magnitude of dam building in the Himalayas is overwhelming,” says Kamaljit Bawa, a conservation biologist at the University of Massachusetts, Boston. “They are moving too fast without properly assessing the risks and alternatives.”

Last week, the battle flared up once more in the Indian state of Sikkim, where the 520-mega­watt Teesta IV hydroelectric project would block a tributary of the Brahmaputra (see ‘A deluge of dams’). As the Indian government’s Ministry of Environment and Forests started to review the environmental impact assessment (EIA) for the project, indigenous Lepcha and Bhutia communities redoubled their protest, saying that the dam would take away the last stretch of free-flowing river in the heart of their sacred land. Following previous demonstrations, a petition objecting to the construction has now attracted more than 1,300 signatures.

Advocates say that the projects are a vital part of the drive to double India’s electricity-generating capacity to 300,000 megawatts by 2022, a goal that is said to be essential for the country’s economic growth. Electricity shortages are already wreaking havoc: in July, for example, a massive blackout across the country left 600 million people without electricity. Yet India is also the world’s third-largest emitter of carbon dioxide, mainly due to the burning of coal for electricity, and its emissions are expected to double by 2030 if the country’s energy mix does not change substantially. The government sees the largely untapped hydropower in the Himalayas as a panacea for both problems, and it plans to add another 110,000 megawatts of hydroelectric capacity by 2025, an eightfold increase1. 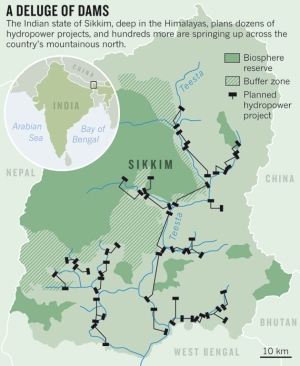 According to a study published this month2, that would create a dam for every 3,000 square kilometres of valleys in the Indian Himalayas, 62 times the global average density for hydroelectric stations. “The consequences would be dire,” says Maharaj Pandit, an ecologist at the University of Delhi, who led the study. Most of the dams would be in regions of high biodiversity, and about 1,700 km2 of forests would be either submerged or damaged by new infrastructure and other dam-related activities. Pandit’s ecological modelling suggests that, by 2025, this would reduce tree biodiversity in the region by more than one-third, and lead to the extinction of 22 flowering plants and 7 vertebrate taxa.

Although hydroelectric projects in flatter terrain create huge reservoirs, providing a substantial head of water to generate power, most of those in the Indian Himalayas would use run-of-the-river dams, which require smaller reservoirs. Such dams divert water through tunnels to the turbines, and return it to the river downstream. Developers argue that the approach reduces a dam’s environmental footprint — but ecologists say that a series of barriers along the rivers would seriously fragment both terrestrial and aquatic ecosystems. “The blow would be fatal to fish biodiversity,” says Pandit, whose studies show that the volume of water in a river is the key determinant of the richness of fish species3.

Dulal Goswami, an environmental scientist at Gauhati University in Guwahati, Assam, worries that the geological hazards of the region have not been properly considered. “The Himalayas are fragile and dynamic,” he says. Earthquakes of magnitude 7 or 8 are not uncommon, and increasing glacial melts due to climate change are causing more floods, both of which can damage dams and tunnels.

And the rivers’ heavy sediment loads could clog the dams. According to Goswami, the Brahmaputra carries 400 million tonnes of sediment each year, peaking at 25 million tonnes a day during extreme monsoon events.

The Indian government has required EIAs for the projects, but these are lax, says Neeraj Vagholikar, a conservationist at the non-governmental organization Kalpavriksh in Pune. For example, he says, the EIA of a dam project on the Siyom River lists just five bird species in an area that ecologists say has more than 300; similarly, the EIA for the Lower Subansiri dam lists 55 fish species in a river that has at least 156.

The assessments usually cover a radius of only 10 kilometres from the dam and reservoir, and do not consider downstream effects or secondary impacts caused by the influx of labour and infrastructure such as power lines. And the cumulative impact of multiple dams along the same river is not assessed before individual projects are approved. “This is particularly important for areas with densely clustered dams,” says Bawa. Even if the impacts of individual projects are acceptable, the cascading effects on ecosystems and the geological hazards of dams stacking on top of one another along the same river may be serious, he says. “It’s based on such poor assessments that 99% of the projects get approved,” adds conservationist Samir Mehta, south Asia programme director of International Rivers, a non-governmental organization based in Berkeley, California.

Some also argue that the assessments are not sufficiently independent. “Agencies that conduct the EIAs are selected and paid for by dam developers and deliver favourable assessments in order to be invited back,” says Mehta. The Ministry of Environment and Forests did not respond to Nature’s questions about the allegations.

India is not alone in its rush to build dams in the Himalayas. Other countries, especially China, Pakistan, Nepal and Bhutan, plan to add hundreds more dams along the rivers, prompting similar concerns about their EIAs. Damming rivers upstream could have significant impacts on downstream nations, but “every country behaves as if the river is 100% theirs”, says Edward Grumbine, an environment-policy researcher at the Chinese Academy of Sciences’ Kunming Institute of Botany. “This is a recipe for disaster.”