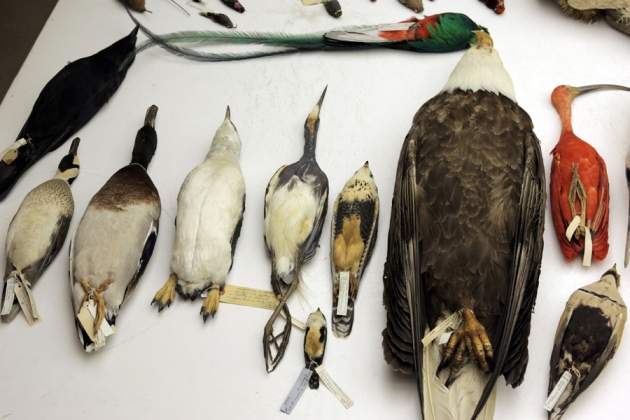 Birds at the National Museum of Natural History in Washington DC showcase some of the species that have had their genomes sequenced.

Evolutionary geneticist Tom Gilbert was sipping a coffee in Madrid five years ago when an idea hit him — literally. “A pigeon crapped on me,” he says, “and I thought to myself, ‘Huh, pigeons.’”

Gilbert, of the Natural History Museum of Denmark in Copenhagen, and dozens of his colleagues today report an evolutionary analysis of the genomes of 48 bird species (including pigeons), amounting to the most comprehensive genome study of any major branch of the tree of life (E. D. Jarvis et al. Science 346, 1320–1331; 2014). The results confirm a ‘big bang’ in bird diversity after dinosaurs went extinct, and settle long-standing questions on how different birds are related to each other.

A consortium of researchers co-led by Gilbert publish a further 18 bird-genome papers today, in Science and in several journals published by BioMedCentral, on topics as diverse as the basis of birdsong, birds’ loss of teeth and the cold-weather adaptations of penguins (see avian.genomics.cn/en). 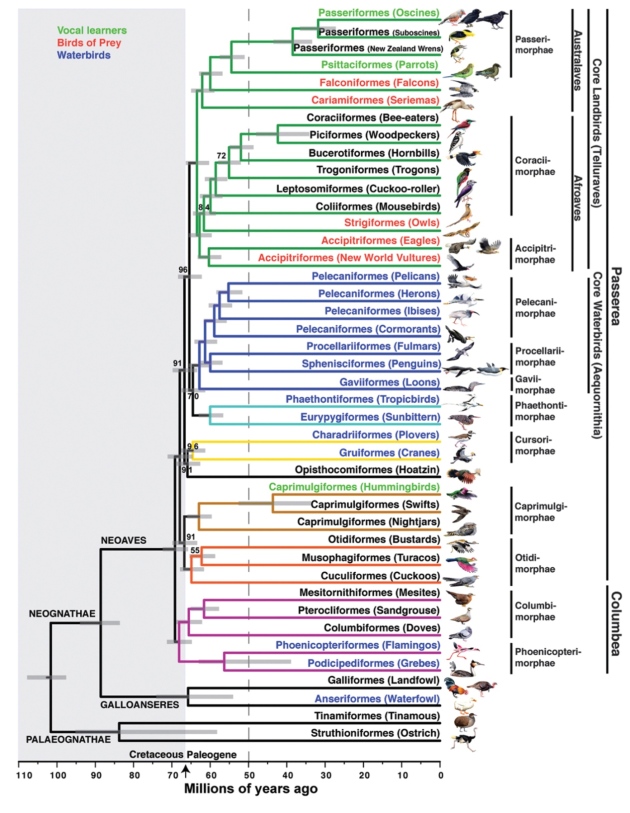 The tree of life for birds has been redrawn by geneticists. Names on branches denote orders (-iformes); drawings are of the 48 species sequenced. To the right are superorder names (-imorphae) and higher names. The grey dashed line at 50 million years ago shows when the neoavian orders were established. The small black arrow marks the Cretaceous–Palaeogene boundary 66 million years ago, when non-bird dinosaurs went extinct.

No one has ever used so much genome data from so many species to determine evolutionary relationships (see graphic). Achieving this daunting task meant building a vast international collaboration that began, appropriately, with pigeons.

In 2010, Gilbert struck up a partnership with the BGI, a sequencing powerhouse in Shenzhen, China, to map the first pigeon genome. The goals were to work out how different breeds relate to each other and the origins of their various traits. But the project grew more ambitious after Gilbert met genome scientist Guojie Zhang of the BGI later that year.

It turned out that the BGI had already sequenced several other bird genomes for another project led by neuroscientist Erich Jarvis of Duke University in Durham, North Carolina. The three researchers realized that, with a few more samples, they could get genomes from all branches of a group called Neoaves, which includes most modern birds except flightless species (such as ostriches and emus) and not chickens, ducks or other fowl. “It struck me that there’s this pretty major unsolved question in avian evolutionary history, which is how do the different bird orders relate to each other?” Gilbert says.

No one had been able to determine which species split off first from the common ancestor of all Neoaves. Furthermore, study after study had thrown up different ways of mapping the evolutionary relationships between the subset of Neoaves that exhibit vocal learning, a trait that is found in just a handful of animals and that scientists see as analogous to human speech. Only entire genomes would reveal birds’ true evolutionary history, Gilbert and his colleagues surmised.

Except for a trip to a zoo in the United Arab Emirates to collect blood from a bustard and a sandgrouse, gathering DNA samples was straightforward. So, too, was sequencing the genomes, which the BGI finished by summer 2011. But analysing the data and using them to build an evolutionary tree required another three years, the development of new computational methods and 300 years of computing time. Other researchers asked if they could use the data, and the project swelled to hundreds of scientists at 80 institutions in 20 countries; marathon Skype calls became a weekly fixture for Gilbert, Zhang and Jarvis.

The results illuminate various aspects of bird biology, from neurophysiology to population genetics. For instance, Jarvis and his co-workers discovered parallels between gene activity patterns in brain areas involved in birdsong and in human speech (A. R. Pfenning et al. Science http://dx.doi.org/10.1126/science.1256846; 2014). Another effort dated the loss of teeth in birds to around 116 million years ago (R. W. Meredith et al. Science http://dx.doi.org/10.1126/science.1254390; 2014). Yet another showed how inbreeding shaped the genome of the crested ibis (Nipponia nippon) after a recovery programme brought its population up from seven individuals in the 1980s to hundreds now (S. Li et al. Genome Biol. 15, 557; 2014).

The genomes reveal the broad brushstrokes of the bird family tree. The results show that the first Neoaves species to peel off were ancestors of today’s doves, grebes and flamingos. The authors also conclude that vocal learning may have evolved independently in the ancestors of parrots, hummingbirds and songbirds, and that the ancestor of all land birds — which include eagles, woodpeckers, crows and parrots — was probably more like a modern bird of prey or, as Gilbert puts it, “a mean-ass carnivore”.

The sequences also point to an explosion in diversity between 67 million and 50 million years ago, a period when non-bird dinosaurs are thought to have been wiped out by an asteroid impact. Mammals seem to have flourished then too, and both groups may have taken advantage of the niches that dinosaurs left behind.

Stephen Richards, a genomicist at Baylor College of Medicine in Houston, Texas, who is leading an effort to sequence 28 insect genomes, praises the team’s decision to systematically select bird species so that one from each taxonomic order was represented, rather than picking scientists’ favourite species. “It’s a foundational work for the next century of biological work into birds,” he says. “We need this revolution across all of biology.”

Gilbert, meanwhile, is a convert to super-sized projects that bring together multiple labs. No one group can do all the work to answer other questions he wants to tackle, such as the evolution of domestic crops. “I don’t spend all my time looking at hummingbirds,” he says. Or pigeons, for that matter.