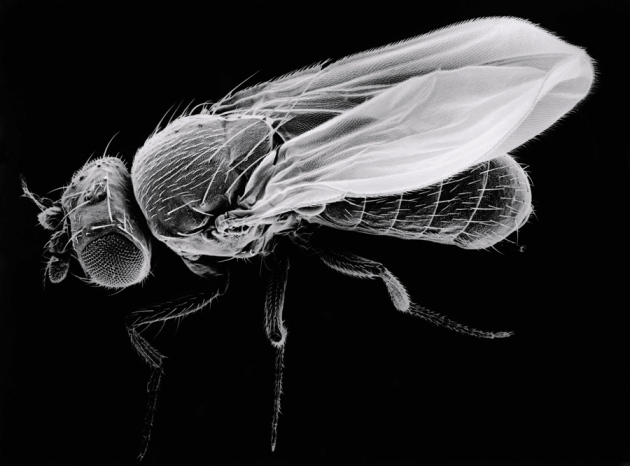 A scanning-electron micrograph of the fruit fly, Drosophila melanogaster.

On 11 November 1954, Japanese ecologist Syuiti Mori placed a dark cloth over a captive colony of fruit flies and began one of evolutionary biology's longest-running lab experiments. Sixty-one years and some 1,500 generations later, researchers have now identified dozens of genetic variations that may help the flies’ descendants to cope with life in total darkness1.

The dark flies look just like normal fruit flies (Drosophila melanogaster), except for their slightly longer head bristles, which are used as sensory organs. They also seem to have a keener sense of smell, and a superior ability to find a mate in the dark, compared with normal flies. But despite a life shrouded in darkness, the dark flies are drawn to light and retain their circadian cycles, says Naoyuki Fuse, a geneticist at Kyoto University who became the steward of Mori's ‘dark-fly’ project in 2008; Mori himself died in 2007.

In 2012, Fuse and his colleagues sequenced the dark-fly genome, identifying 220,000 single-letter differences in its DNA and several thousand larger DNA insertions or deletions, compared with a normal fruit-fly strain2. (Mori had started a control colony from the same fly population that was kept in normal lighting conditions, but this was lost after an incubator malfunctioned.)

To determine which of the genetic variations might be helping the flies to adapt to total darkness, Fuse’s team bred the dark flies with normal flies and followed how this hybrid population evolved over 49 generations, using genome sequencing. They reasoned that, if the hybrids were reared in the dark over many generations, genetic variants that helped the flies to adapt would become more common over time.

Fuse’s team came up with a list of 84 candidate genes, including several that are involved in sensing odours and chemicals in the environment, as well as producing pheromones. The results were published this month in the journal Genes Genomes Genetics1. The authors speculate that alterations to these genes could help flies to detect pheromones better, explaining their increased ability to mate in the dark. Fuse hopes to test this hypothesis by inserting the dark-fly gene variations in normal flies using genome-editing technologies.

“It's a really interesting study,” says Richard Lenski, an evolutionary biologist at Michigan State University in East Lansing, whose team has been propagating a strain of Escherichia coli bacteria since 1988, over more than 50,000 generations. Lenski’s team has tracked how the bacteria adapt to new food sources by freezing samples every few months, and analyzing these records. “It's too bad that they don't have, as far as I know, frozen samples of the ancestral population's DNA and samples from all along the way,” he adds.

“I think these types of long-term evolution system are very interesting, and there aren’t that many of them,” says Leonid Kruglyak, a geneticist at the University of California, Los Angeles. It should be possible to identify gene variants that have helped flies to adapt to the dark, but he says that the variants Fuse’s team identified may have changed in frequency because of random ‘genetic drift’, not natural selection. “Bottom line: cool system, they’re asking interesting questions, not clear they’re getting the answers yet," Kruglyak says.

Fuse says that the dark-fly project is important scientific heritage. But because his position at Kyoto University is not permanent, he is uncertain of the project’s future.