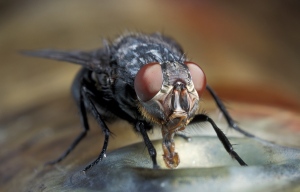 Blowflies dine on animal carcasses — and their feeding habits could help researchers to track mammals.

The blowflies and flesh flies that settle on dead animals aren't just feasting on the carrion — they're sampling their DNA. Scientists in Germany have now shown that this DNA persists for long enough to be sequenced, providing a quick and cost-effective snapshot of mammal diversity in otherwise inaccessible rainforests.

Researchers stumbled on the grisly cataloguing technique while studying a form of anthrax that kills chimpanzees in Côte d'Ivoire. They started sampling flies to see whether the insects could harbour the anthrax bacterium after feasting on infected bodies, but soon realized “that detecting mammal DNA from flies could also be an extremely cool tool for assessing biodiversity”, says team leader Sébastien Calvignac-Spencer, an evolutionary biologist at the Robert Koch Institute in Berlin.

By baiting nets and traps with meat, the team collected carrion flies from Taï National Park in Côte d'Ivoire and Kirindy Reserve in Madagascar, and found that 40% of them carried mammal DNA. The researchers sequenced this material to identify 16 mammals in Côte d'Ivoire, including six of the nine local primate species, as well as Jentink’s duiker (Cephalophus jentinki) — an endangered antelope of which fewer than 3,500 remain. In Madagascar, the team identified four mammal species — including two lemurs — representing one in eight of all the island’s mammals. The work will appear on 7 January in Molecular Ecology1.

The DNA is “not gorgeous, but still usable”, says Calvignac-Spencer: his team was able to recover fragments that are several hundred base pairs long — something that would be harder to find in animals such as mammals, whose guts are more efficient at breaking food down with acids and enzymes. ”Flies have a much less sophisticated digestive system,” he says.

As well as providing inventories of species, the flies could help to track the status of endangered populations far more effectively than active searches, he suggests. For example, the Ebola virus killed thousands of gorillas in Republic of Congo and Gabon ten years ago, but active monitoring found only 44 carcasses2. “And these were gorillas!” says Calvignac-Spencer. “Just imagine how hard it might be to monitor die-offs of bats or rodents,” he adds. “Flies could really be precious in this context.”

“It’s an extremely simple but clever idea,” says Thomas Gilbert, a geneticist at the University of Copenhagen who last year showed3 that leeches can also preserve the DNA of the animals they feed on. Gilbert says that the beauty of the latest study is “that flies are so widely distributed in comparison to our leeches. They can sample where we can't.” However, he notes that DNA is more stably preserved in leeches, so it lasts longer. “Really, the methods are very complementary,” he says.