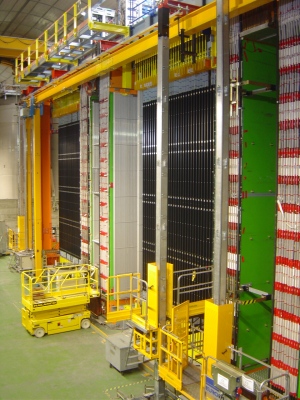 A possible faulty connection in the OPERA experiment may account for neutrinos appearing to travel faster than light.

The OPERA collaboration, which made headlines in September with the revolutionary claim that it had clocked neutrinos travelling faster than the speed of light, has identified two possible sources of error in its experiment. If true, its initial result would have violated Einstein’s special theory of relativity, a cornerstone of modern physics.

OPERA had collected data suggesting that neutrinos generated at CERN near Geneva in Switzerland and sent 730 kilometres to its detector at Gran Sasso National Laboratory in Italy were arriving 60 nanoseconds faster than a light beam would take to travel the same distance. Many physicists were sceptical, but the measurement seemed to have been done carefully and reached a statistically significant level.

But according to a statement OPERA began circulating today, two possible problems have now been found with its set-up. As many physicists had speculated might be the case, both are related to the experiment’s pioneering use of Global Positioning System (GPS) signals to synchronize atomic clocks at each end of its neutrino beam. First, the passage of time on the clocks between the arrival of the synchronizing signal has to be interpolated and OPERA now says this may not have been done correctly. Second, there was a possible faulty connection between the GPS signal and the OPERA master clock.

An anonymously sourced account on Science Insider today broke the news that OPERA may have made a mistake. That report says the faulty connection can account exactly for the 60-nanosecond effect. OPERA’s official statement stops short of that, saying instead that its two possible sources of error point in opposite directions and it is still working things out. Its statement reads in full:

“The OPERA Collaboration, by continuing its campaign of verifications on the neutrino velocity measurement, has identified two issues that could significantly affect the reported result. The first one is linked to the oscillator used to produce the events time-stamps in between the GPS synchronizations. The second point is related to the connection of the optical fiber bringing the external GPS signal to the OPERA master clock.

“These two issues can modify the neutrino time of flight in opposite directions. While continuing our investigations, in order to unambiguously quantify the effect on the observed result, the Collaboration is looking forward to performing a new measurement of the neutrino velocity as soon as a new bunched beam will be available in 2012. An extensive report on the above mentioned verifications and results will be shortly made available to the scientific committees and agencies.”

Caren Hagner, a member of OPERA at the University of Hamburg in Germany, says: “For the moment the collaboration decided not to make a quantitative statement, because we have to recheck and discuss the findings more thoroughly.”

At Fermilab in Batavia, Illinois, members of the MINOS collaboration (Main Injector Neutrino Oscillation Search) continue to try to make their own independent measurement of the speed of neutrinos, with initial results expected later this year.