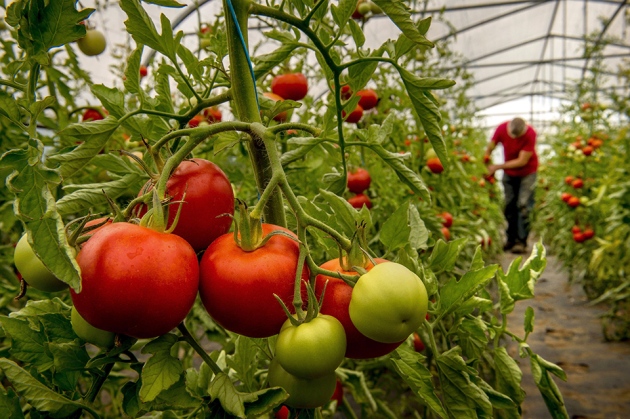 A gene mutation that made tomatoes easier to harvest has been identified.

From their giant fruits to compact plant size, today’s tomatoes have been sculpted by thousands of years of breeding. But mutations linked to prized traits — including one that made them easier to harvest — yield an undesirable plant when combined, geneticists have found1.

It is a rare example of a gene harnessed during domestication that later hampered crop improvement efforts, says geneticist Zachary Lippman of Cold Spring Harbor Laboratory in New York. After identifying the mutations, he and his colleagues used CRISPR gene editing to engineer more productive plants — a strategy that plant breeders are eager to adopt.

“It’s pretty exciting,” says Rod Wing, a plant geneticist at the University of Arizona in Tucson. “The approach can be applied to crop improvement, not just in tomato, but in all crops.”

Lippman knows his way around a tomato farm. As a teenager, he spent his summers picking the fruit by hand — a chore he hated. “Rotten tomatoes. The smell lasts all day long,” he says. “I would always pray for rain on tomato-harvest day.”

But years later, his interest in the genetics that control a plant’s shape led him back to tomato fields, to untangle the genetic changes that breeders had unknowingly made.

In the 1950s, researchers found a new trait in a wild tomato relative growing in the Galápagos Islands: it lacked the swollen part of the stem called the joint.

Joints are weak regions of the stem that allow fruit to drop off the plant. Wild plants benefit from dropping fruit because it helps seed dispersal. But with the advent of mechanical tomato pickers, farmers wanted their fruit to stay on the plant. Breeders rushed to incorporate the ‘jointless’ trait into their tomatoes.

This new trait came with a downside. When it was crossed into existing tomato breeds, the resulting plants had flower-bearing branches that produced many extra branches and looked like a broom, terminating in a host of flowers. The flowers were a drain on plant resources, diminishing the number of fruits it produced. Breeders selected for other genetic variants that overrode this defect. But decades later, Lippman's team went looking for the genes behind this phenomenon.

Two rights that make a wrong

They had previously screened a collection of 4,193 varieties of tomato, looking for those with unusual branching patterns2. From that collection, they tracked down variants of two genes that, together, caused extreme branching similar to what plant breeders had seen. One of the two genes, the team reports in a paper published online in Cell on 18 May, is responsible for the jointless trait1.

The other gene favours the formation of a large green cap of leaf-like structures on top of the fruit — a trait that was selected for thousands of years ago, in the early days of tomato domestication. The benefits of this trait are unclear, Lippman says, but it may have helped to support heavier fruits.

With these genes uncovered, his team used CRISPR–Cas9 editing to eliminate their activity, as well as that of a third gene that also affects flower number, in various combinations. This generated a range of plant architectures, from long, spindly flower-bearing branches to bushy, cauliflower-like bunches of flowers — including some with improved yields.

The findings should help to quell lingering doubts among plant breeders that negative interactions between desirable genetic traits are a force to be reckoned with, says Andrew Paterson, a plant breeder at the University of Georgia in Athens. The idea has been controversial, he says, because the effects have been difficult to detect statistically.

Lippman’s team is now working with plant breeders to use gene editing to develop tomatoes with branches and flowers optimized for the size of the fruit. Plants with larger fruit, for example, may have better yields if they have fewer flowering branches than those with smaller fruit.

“We really are tapping into basic knowledge and applying it to agriculture,” he says. “And ironically, it happens to be in the crop that I least liked harvesting on the farm.”