It’s show time for NASA’s planetary programme. This autumn, the agency will winnow 28 proposals for exploring the Solar System to perhaps three or five. Eventually, there will be just one lucky winner: NASA’s newest Discovery-class mission, to launch at some point in the early 2020s.

Here, Nature looks at some wider themes that emerged among the proposals, which arrived at NASA last month in response to a call for ideas. Designed to cost US$450 million or less, any of these missions would be among the agency’s cheapest attempts to explore the Solar System. Check them out, then vote for where you think NASA should explore. 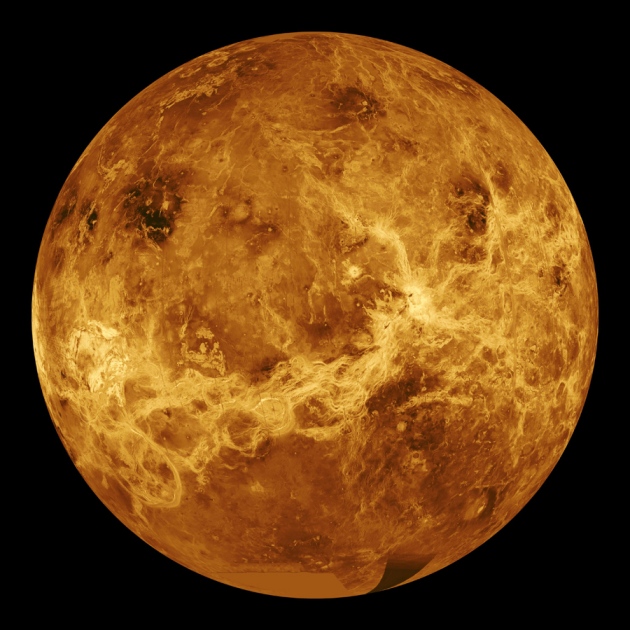 Venus is covered with hundreds of volcanoes, which are probably inactive.

Earth’s much-neglected sibling has not been visited by a US planetary mission since NASA’s Magellan orbiter ended its work with a controlled plunge into the surface of Venus in 1994. (The European Space Agency’s Venus Express visited between 2006 and 2014, and Japan’s Akatsuki probe will make its second attempt to enter Venusian orbit this December.)

Venus enthusiasts have proposed all sorts of missions to explore the second rock from the Sun. Many of those would use radar to pierce Venus’s thick clouds from orbit and reveal the hot, volcanically active landscape beneath. The VERITAS (Venus Emissivity, Radio Science, InSAR Topography and Spectroscopy) mission, for example, would generate a high-resolution map of the planet’s surface. By repeatedly flying over the same locations, VERITAS could reveal whether the ground on Venus is shifting, as happens in active volcanic and earthquake zones on Earth. 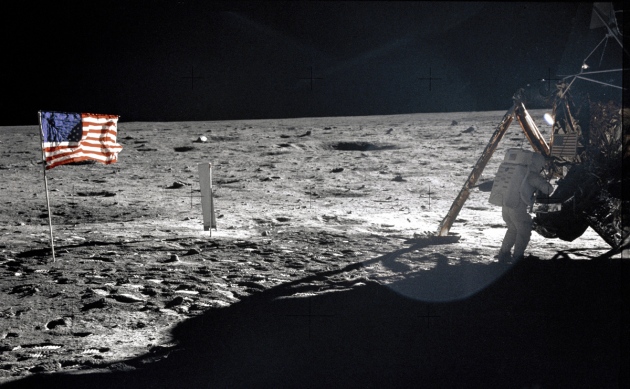 Apollo astronauts first set foot on the Moon in 1969, but researchers still have much to learn about the lunar surface.

Astronomically speaking, the Moon is next door. Twelve men have walked on its surface. What’s left to discover?

Plenty, it seems. Two of the Discovery proposals take high-tech approaches to specific lunar-science problems. One, called the Moon Age and Regolith Explorer (MARE), aims to bridge Apollo astronauts’ surface exploration and the laboratory studies that Earth-bound scientists have been limited to since. MARE is a rock-dating machine that would land on young lava flows on the Moon’s near side. Using the radioactive decay of minerals to measure the lava’s age, the spacecraft would help researchers begin to untangle the complex chronology of the Moon’s surface.

If one lunar spacecraft is not enough, what about three dozen? The NanoSWARM mother ship would fly to the Moon and burp out a collection of small CubeSats. Some would explore mysterious magnetic swirls on the lunar surface and look at how they interact with the solar wind. Others would dive-bomb into the hearts of lunar magnetic anomalies; in the seconds before they crashed, the probes would be able to measure these magnetic fields much better than ever before. 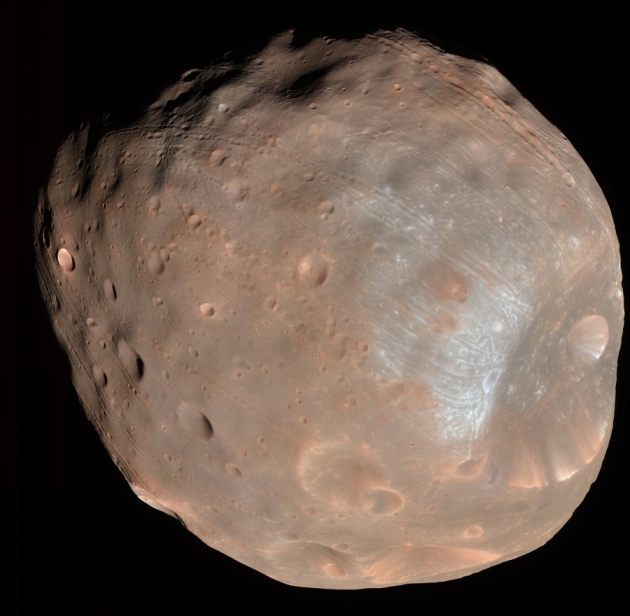 The origin of Mars's moons — Phobos (shown here) and Deimos — is a mystery.

Since 2001, NASA has sent seven spacecraft to Mars, but none to its moons — Phobos and Deimos. No fewer than three Discovery mission proposals target the red planet’s satellites.

Why all the attention? Because nobody really knows where the moons came from. They could be leftovers from Mars’s formation more than 4.5 billion years ago. They could be pieces of the red planet that were knocked off by a massive meteoroid impact more recently. Or they could be random bits of asteroid or other material that were captured by Martian gravity.

All three mission concepts would explore Phobos and Deimos to probe their origins. One would see a spacecraft orbit Mars and make several close fly-bys of both moons. Another would orbit each, one after the other. And the third would land on Phobos to examine it at close range. 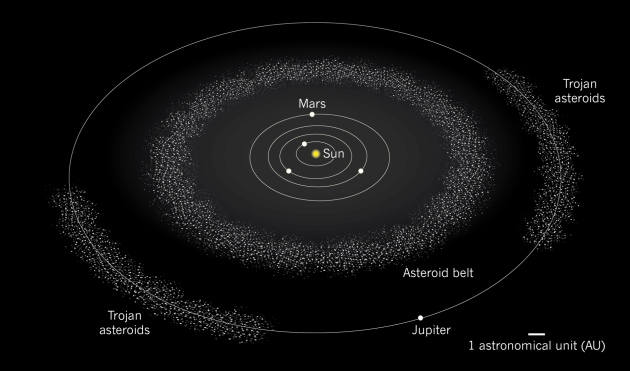 A proposed mission to the Trojan asteroids could help reveal new information about the early Solar System.

Perhaps the biggest clutch of Discovery mission proposals involves asteroids and other small bodies. Some would focus on specific asteroids. One would visit a metallic rock called Psyche, which may resemble the core of Earth. The Binary Asteroid in-situ Explorer (BASiX) mission would set off small blasts on the surface of a binary asteroid, to see what the explosions do to the gravitational movements of both objects.

Other asteroid ideas fall more in the category of grand tours. One mission would visit nine small space rocks — some in the asteroid belt between Mars and Jupiter, and some that zip dangerously close to Earth — to see what makes them different from big asteroids such as Vesta and Ceres, now being orbited by NASA’s Dawn spacecraft.

And a proposal named Lucy, after the iconic hominin skeleton, would tour Jupiter’s Trojan asteroids, which orbit along the planet’s path either ahead of or behind Jupiter. Studying Trojans could reveal the ‘fossil’ materials that clumped together in the early Solar System to form planets and other bodies. 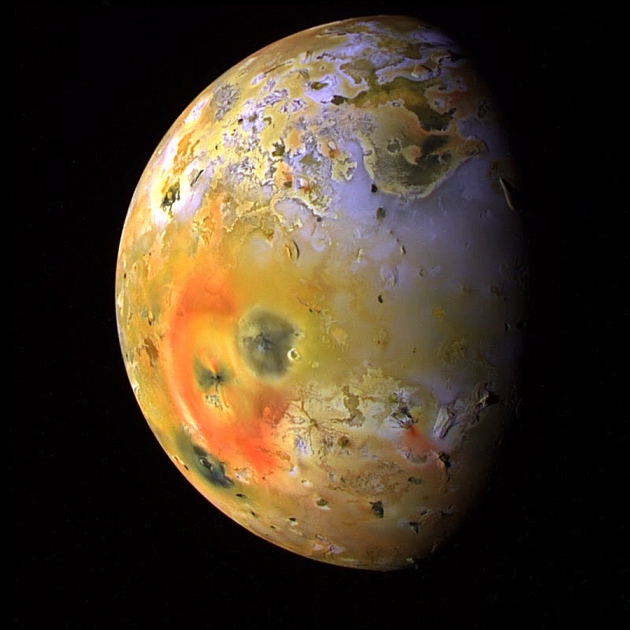 Jupiter's moon Io is home to the most active volcanoes in the Solar System.

The most active volcanoes in the Solar System are not in Iceland or Hawaii — they are on the moon Io, which has a crust heated by Jupiter’s powerful gravitational pull.

To avoid as much of Jupiter’s dangerous radiation as possible, the Io Volcano Observer (IVO) mission would soar in giant stretched-out orbits, passing close to Jupiter and Io only once during each orbit. It would fly past Io nine times, photographing volcanoes in both daylight and darkness. On New Year’s Eve 2028, it would even fly through plumes spewing from the volcano named Pele.

To power its journeys so far from the Sun, IVO would roll out a set of gigantic solar panels to soak up as much sunlight as possible.