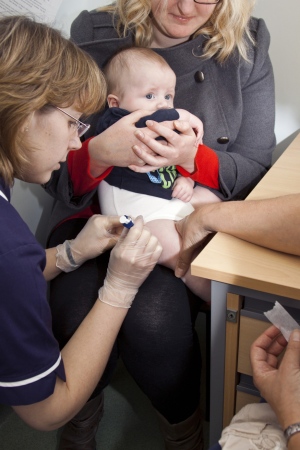 Babies inoculated with a commonly used five-in-one vaccine to protect against a range of potentially lethal childhood diseases face up to a six-fold increased risk of fever-associated seizures on the day they are vaccinated, according to a study of nearly 380,000 Danish children.

But both the authors of the study published today in the Journal of the American Medical Association1 and experts in the field stress that parents shouldn't be concerned. The overall risk is very low, and there was no increased risk of them recurring or other lasting ill effects such as epilepsy.

Febrile seizures — full-body convulsions brought on by fever — are relatively common in young children. They usually result from infections such as influenza or chickenpox and are generally over in minutes without further treatment, and have no known lasting health problems.

The latest study is the most thorough large-scale study to date of the risk of febrile seizures following inoculation with the DTaP-IPV-Hib vaccine, which protects against diphtheria, tetanus and pertussis (whooping cough), as well as polio and Haemophilus influenzae type b.

“It is kind of a relief,” says Yuelian Sun, an epidemiologist at Aarhus University in Denmark, who led the study. “Although we find a slightly increased risk of febrile seizure on the first day of vaccination, the overall risk of febrile seizures is low and for children who do get them there are no lasting effects.”

The DTaP-IPV-Hib vaccine is used in many countries, including the United Kingdom and the United States. Although different countries use different vaccination schedules, it is common for children to receive three doses in their first year of life.

Two previous studies, of the DTaP-IPV-Hib vaccine in the United Kingdom2 and of the diptheria–tetanus–pertussis (DTaP) vaccine in the United States3, also found that the risk of seizures was higher on the day of vaccination, although the results were not statistically significant and the studies did not distinguish between febrile seizures and other kinds not accompanied by fever, says Sun.

Child-health and vaccine experts praised the Danish study's design and quality. None have suggested that present vaccination practices should change, except perhaps to ensure that fever-reducing drugs are always available.

“Any vaccine can carry the risk of side-effects but this offers more evidence of the good safety profile of this combination vaccine. [This study] adds to our knowledge in confirming that there is no short- or long-term risk of epilepsy,” says Nick Andrews, deputy head of the statistics unit at the UK Health Protection Agency in London, and lead author of the previous UK study.

It is a “very big and carefully conducted study” says Adam Finn, a paediatrician at the University of Bristol, UK, who says that the large study size was needed to detect such a rare adverse event. It would be “surprising” if the combination vaccine didn't carry a small risk of febrile seizures, given that vaccines are known to cause fever in some children. The key, he says, is the risk–benefit balance, which lies “firmly in favour of using the vaccine”.

Finn says that a main thrust of present research is to understand why some children get fevers in response to vaccination and others don't. “One day we may be able to tailor vaccines to individual children instead of taking a one-size-fits-all approach, and thus reduce risks even further,” he says.