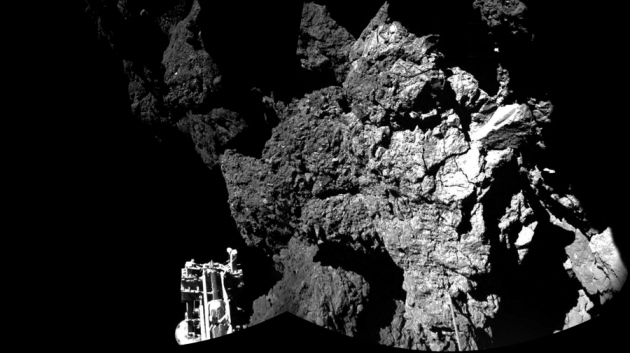 The first image that Philae sent back from the comet surface.

Ever since the European Space Agency’s Philae lander ran out of batteries on 15 November, just three days after it bounced on to comet 67P/Churyumov–Gerasimenko, scientists have consoled themselves with the hope that the craft is not dead, just sleeping.

Stuck in a shaded area beneath a rocky-looking outcrop on the comet, Philae has been unable to charge its solar-powered battery. But as 67P gets nearer to the Sun, scientists hope that the lander could receive enough solar power to reboot and transmit a signal to the orbiting Rosetta probe. Lander scientists predict that, from 8 to 17 May, Rosetta will be in a good position to hear Philae’s signals — if the lander is awake. Nature takes a look at five factors that will decide whether Philae wakes or sleeps on.

Only once Philae’s thermostat registers that its internal temperature is higher than −45 °C will the lander check to see whether it has enough power to reboot. Reaching that temperature is Philae’s greatest concern, says Stephan Ulamec, lander project manager at the German Aerospace Centre (DLR) near Cologne.

In November, Philae clocked outside temperatures of less than −160 °C. By now, the area around the lander may have warmed by around 40 or 50 °C, says Ulamec. Philae is also heated by its solar absorbers, which maximise the warmth gained from sunlight, and by its solar panels, which generate electricity and turn it directly into heat. The craft is insulated too. But as the comet rotates, Philae experiences only 80-minute bursts of sunlight, and then falls into more than 11 hours of darkness. So if its environment remains very cold, the lander may be fighting a losing battle.

Even if Philae does wake using the power it generates during sunlight hours, a chilly environment will prevent its battery from being able to store energy for darker times; it is designed to recharge only above 0 °C. The team would consider attempting to charge it at lower temperatures, but is currently making plans that assume the lander will only operate during bursts of sunshine, says Valentina Lommatsch, a member of the lander team at the DLR.

Shadows cast by the terrain around Philae could reduce the solar power and heat that the lander receives, says Lommatsch. Her team has good estimates of Philae’s position and orientation, but knows less about the shape of surrounding outcrops, whose shadows will shift as the comet moves closer to the Sun.

Philae is also tilted, which means that even though the Sun is becoming higher in the sky over the comet, the amount of sunlight hitting solar absorbers on the lander's lid is diminishing. According to some reconstructions, sunlight will cease to hit the absorbers in June, says Cinzia Fantinati, Philae operations manager at the DLR, although the light hitting solar panels on the lander's sides may increase. In an effort to maximize the lander's exposure to sunlight, her team’s last command to Philae before hibernation was for it to rotate and rise on its legs, bringing its largest solar panel into the light. But because this happened during hours of darkness, they could not gauge its success, says Lommatsch.

Before Rosetta launched, Philae’s components passed tests down to a temperature of −60 °C. But during the coldest nights on the comet, the lander’s internal temperature is likely to have dropped to around −140 °C, says Ulamec. No one knows how low Philae’s temperature can go, but Ulamec fears that materials contracting under the cold could cause soldering points to snap. The rechargeable battery is particularly vulnerable.

As 67P heats up, jets of sublimating gas on the comet also throw up increasing amounts of dust, some of which will resettle on the comet floor. Dust could have covered the solar panels and stopped them from working. On the plus side, Ulamec says, data from the lander’s first three days suggest that Philae’s cubbyhole seems to contain little dust. Also, the comet’s gas jets are unlikely to be powerful enough to shift Philae’s position, he says.

5. A question of timing

The most tantalizing possibility is that Philae is already awake, but either does not have enough power to communicate or is already transmitting a signal that Rosetta has not been in a position to hear. If the lander cannot charge its battery, transmissions will come only during the 80 minutes of sunlight that the lander experiences every 12.4 hours.

For the best chance of hearing those signals, Rosetta must be less than 300 kilometres from Philae, on the same side of the comet, and with both crafts’ antennas broadly aligned. From 8 to 17 May, there should be at least 10 opportunities for contact, says Fantinati. There will be chances after that, too, although Rosetta’s flight plan is currently uncertain after a navigation problem caused by comet activity forced it to change orbits in March.

Even if silence continues after the comet’s closest approach to the Sun — on 13 August — that will not be a reason to give up, adds Lommatsch. “Something could still move and Philae could receive a lot more light,” she says. “We’ll have to keep waiting and hoping.”