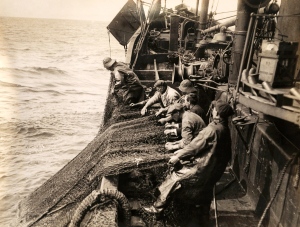 Even in its early days, trawling had a big impact on fishery stocks.

It is a safe bet that when local councillor C. Abbs testified before a royal commission in northeast England in 1866, he did not expect that his statements would be of use to a fisheries scientist nearly 150 years later.

“I could buy haddocks formerly at 3d. and I have now to pay 6d.”, Abbs claimed, using the pre-decimal notation for pence (worth 1/240th of £1 at the time). His information on price doubling, along with other testimony from nineteenth-century fishermen and their customers, has now been converted into estimates of the impact of bottom trawling. The fishing technique, which involved dragging nets along the seafloor, was increasing in popularity at the time — when boats were still powered by the wind.

Today, bottom trawling is often criticized as a destructive practice that can obliterate sensitive sea-floor habitats. In work published in Fish and Fisheries1, Ruth Thurstan, a marine ecologist now at the University of Queensland in Brisbane, Australia, and her collaborators show that such concerns existed long before there were detailed records.

Thurstan and her colleagues at the University of York, UK, where the work took place, looked at the evidence given to two royal commissions that investigated the effects of fishing in the 1860s and 1880s. The team converted all quantitative statements that related to fish stocks or fishing practice into relative changes in measures such as catch rate and distance travelled to fishing grounds.

The researchers found that witnesses from the northeast of England reported an average 64% decline in catches of whitefish — which includes cod and haddock — over their careers, and that many blamed that drop on the rise of bottom trawling. Thurstan describes this level of impact as “quite shocking”.

“Clearly, even in the days before steam power (using only wind and sail) we had the capability to dramatically alter our coastal seas and the communities contained therein,” she says. “This research provides some of the earliest evidence of the influence of intensive fishing, and shows that dramatic changes occurred many decades before we began to collect fisheries statistics.”

The work pushes knowledge back to the earliest days of industrialized fishing, says Thurstan, highlighting significant but overlooked changes.

“I think the message from the nineteenth century is that even low intensities of bottom trawling can very quickly alter seabed communities beyond recognition, and that fish abundance was being impacted even during the early days of industrialized fishing,” she says. “This heralds a stark warning for our fisheries today, particularly those which are expanding their efforts further offshore and to greater depths, as deep-sea communities are simply not able to recover rapidly from disturbances.”

Jan Geert Hiddink, a marine ecologist who studies the impact of bottom trawling at Bangor University, UK, says that it is now well established that some forms of bottom trawling can be hugely destructive, although the extent of their impact depends on the type of habitat and the fishing technology involved.

“It’s interesting to see the quotes of the [historical] fishermen,” he says, but he cautions that the evidence is “very anecdotal”.

“What I expect would have been happening over time is the fisheries were going from a state where they were under exploited to a state where they are fully exploited,” says Hiddink. That would potentially cut stock levels in half, while maintaining sustainable catch levels.

Hiddink also highlights a different modern parallel: the nineteenth-century fishermen who used lines or pots blamed declining catches on those who trawled. “What is typical is the situation where the fishermen are all blaming each other.”