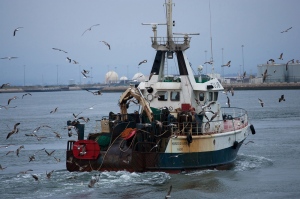 Detailed information on the activities of European fishing fleets is harder to come by now that EU data privacy laws have come into effect.

A little-noticed tweak to one of the European Union’s many rules and regulations is leaving fisheries scientists struggling to access vital data.

The rule change means that raw data from devices used to monitor fishing vessels are no longer available to some scientists. This information is vital for proper, scientifically based management of Europe’s troubled fish stocks, says Hilmar Hinz, a marine biologist at Bangor University, UK.

“This is now a serious problem for us. We’re asked to give the best possible advice and if you do not have highly detailed data you end up having a problem,” says Hinz, first author of a paper discussing the issue. The work is published online in the journal Fish and Fisheries1.

As Europe struggles with reform of its fisheries policy, with many stocks known to be overfished, limiting scientists' access to data represents “a big step back from where we want to go with sustainable fisheries”, says Hinz.

At the heart of the problem is information from devices called Vessel Monitoring Systems, which are attached to many European fishing boats to record their position, direction and speed. From these data, the boats' fishing patterns can be reconstructed, allowing researchers to assess fishing activity and, for example, examine the environmental impact on specific areas.

In 2009 a new European Commission rule was brought in, restricting who could access what data within the EU. This rule took some time to filter through, says Hinz, but it is now becoming apparent that the very detailed fisheries data needed by some academics are no longer available. The bodies in charge of the data will only release information that has been aggregated over areas measuring about 5.5 kilometres to some academics, which is not detailed enough for many studies, Hinz says.

Simon Jennings, a fisheries expert at the Centre for Environment, Fisheries and Aquaculture Science (CEFAS) in Lowestoft, UK, says that it is “hard to overstate” the potential importance of vessel monitoring data to fisheries advice and management. Because CEFAS is a government body that performs a legal function, it still has access to the detailed data under the new rules. However, notes Jennings, it is vital for other researchers to have access too, so that the methods used in analysis can be built on and improved.

The European Commission says that, before the 2009 rules, there was no specific legislation on the use of vessel monitoring data.

“The Commission considers that the work of scientists is extremely important, and that they should have as much data as possible to perform their tasks,” it notes in a statement to Nature. There are currently no plans to modify the rules, says the commission, but the latest implementation is being monitored.

The commission adds that the body charged with overseeing the use of data and privacy within the EU, the European Data Protection Supervisor (EDPS), recently ruled that information from vessel monitoring systems is classed as personal data in some circumstances. This means that the information may be subject to data protection rules, making it more difficult to release it to scientists in a format in which individual boats may be identifiable.

The EDPS ruling also contains another element that is troubling some researchers. It has stated that vessel monitoring data that can be linked to individuals should be subject to a ‘maximum retention period’ so that it is not kept forever.

“We consider, in principle, that 3 years should be the basic time limit for retention, unless it can be demonstrated that they [the data] are needed for longer periods,” the EDPS told Nature in a statement.

The EDPS adds that the legislation does contain broad exceptions for data processing for scientific purposes, and that data can be stored for longer than the normal retention period for such purposes, if it is kept in an anonymous or encrypted form.

With original data seen as vital by some researchers, the fisheries community will be hoping that this is the case.